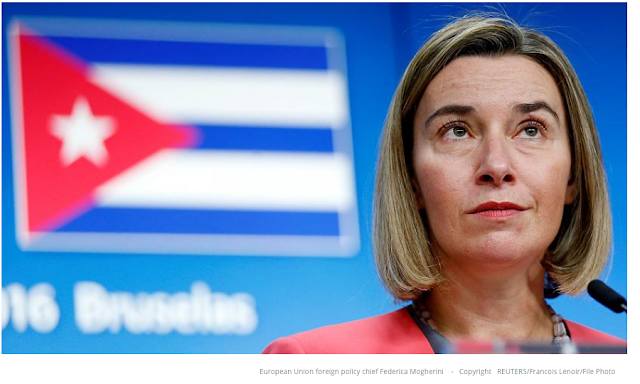 
It comes as no surprise that both the EU and Canada have not responded well to the new American initiative on Cuba and the Caribbean (here, here, and here).  They have engaged with the Cuban state apparatus without much concern about much other than the possibility of augmenting trade, and perhaps of reforming Cuba so that it might better reflect European values. . . eventually (or at least the values of the European administrative elite and their industrial allies).  This was reflected in the Political Dialogue and Cooperation Agreement (PDCA)  entered into between the EU and Cuba (see discussion HERE: The EU to the Rescue of the Cuban Economy? the Political Dialogue and Cooperation Agreement (PDCA)).

More immediately, both Canada and Europe rightly expect that their companies (rather than Cuban state enterprises--the principal venture partners in investment in Cuba) will largely bear the risk of loss from the threatened potential American litigation.  It is far too early to tell, though.

However, it is not too early to do what political elites tend to do fairly well--to speak. And so they have spoken.  To what effect also remains to be seen--bluster (hiding secret negotiations), a show of intent, a clash of international relations culture, a another tear in the alliance between a militarily dependent but economically powerful Europe and the Americans (again; this has happened before)? Who knows?-- (though the chattering classes no doubt have strong views which will also be freely circulated for their own consumption and for consumption of the masses through the leverages speech provided by influential media outlets).

The one interesting stratagems, though, will be the move by both Canada and the EU to invoke the processes of the WTO, to enact blocking statutes, and to seek ways to enforce their readings of a host of treaties between the US and their respective states. That should keep both courts and political elements busy for a number of years. The WTO angle will be especially interesting as it presents a convergence of opportunity for the Trump Administration which has been looking for a way to make good on its inclination to diminish the authority of that mechanism as an arbiter of global trade.  And whoever prevails, the victory will be that of the Trump Administration in the short run--to the extent that all of this effectively makes Cuban economic engagement in global trade harder. Indeed, it is in the "spiral of legal actions" that will follow that the US might well see victory.

In the light of the United States Administration's decision to not renew the waiver related to Title III of the 1996 Helms-Burton (LIBERTAD) Act, the European Union reiterates its strong opposition to the extraterritorial application of unilateral Cuba-related measures that are contrary to international law. This decision is also a breach of the United States' commitments undertaken in the EU-US agreements of 1997 and 1998, which have been respected by both sides without interruption since then. In those agreements, the US committed to waive Title III of the Helms-Burton Act and the EU, inter alia, suspended its case in the World Trade Organisation against the US.

The EU will consider all options at its disposal to protect its legitimate interests, including in relation to its WTO rights and through the use of the EU Blocking Statute. The Statute prohibits the enforcement of US courts judgements relating to Title III of the Helms-Burton Act within the EU, and allows EU companies sued in the US to recover any damage through legal proceedings against US claimants before EU courts.

The decision by the United States to renege on its longstanding commitment to waive Title III of the Helms-Burton (LIBERTAD) Act is regrettable, and will have an important impact on legitimate EU and Canadian economic operators in Cuba. The EU and Canada consider the extraterritorial application of unilateral Cuba-related measures contrary to international law. We are determined to work together to protect the interests of our companies in the context of the WTO and by banning the enforcement or recognition of foreign judgements based on Title III, both in the EU and Canada. Our respective laws allow any US claims to be followed by counter-claims in European and Canadian courts, so the US decision to allow suits against foreign companies can only lead to an unnecessary spiral of legal actions.