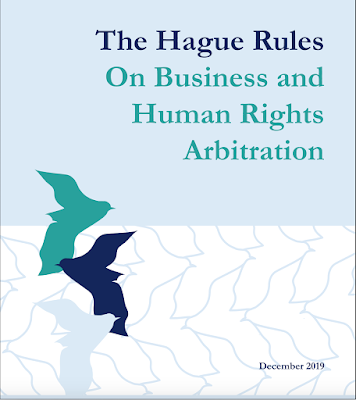 In a prior post I announced the official  launch The Hague Rules at a symposium hosted by the PCA in the Peace Palace in The Hague. Judge Bruno Simma will hand over the first copies to Dr. Bahia Tahzib-Lie, Human Rights Ambassador of the Netherlands Ministry of Foreign Affairs and Ms. Saskia Bruines, Alderman of the City of The Hague.

The Hague Rules are based on the Arbitration Rules of the United Nations Commission on International Trade Law (with new article 1, paragraph 4, as adopted in 2013) (the “UNCITRAL Rules”), with modifications needed to address certain issues likely to arise in the context of business and human rights disputes.  That is both their great strength and the source of their weakness.

The Symposium was held today and its participants advanced the best case for the adoption of the Hague Rules. They also discussed remaioning challenges and the steps that must be taken to advance the embrace of the Hague rules by states, enterprises and by rights holders.

The digital version of Hague Rules may now be downloaded. Please click on the image below to access The Hague Rules.

The Hague Rules on Business and Human Rights Arbitration provide a set of rules for the arbitration of business and human rights disputes. The Hague Rules represent the result of a more than five-year long project involving the elaboration of the concept of business and human rights arbitration, consultation with numerous stakeholders and drafting of the text. The project began with the creation of a Working Group on Business and Human Rights Arbitration by Claes Cronstedt, Jan Eijsbouts and Robert Thompson, and later expanded to include other interested individuals. In 2017, a Drafting Team, whose names appear below, was established to prepare and draft the Rules.

The Drafting Team held sessions at the Center for International Legal Cooperation (CILC) in The Hague in January 2018, October 2018, April 2019 and October 2019. It also conducted numerous other meetings via electronic means. To solicit a wide range of views on its work, the Working Group and the Drafting Team created a Sounding Board of over 220 individuals from different stakeholder groups, including business, non-governmental organizations, governments, international organizations, human rights lawyers, judiciary, arbitrators, practicing attorneys, academics and others with expertise in human rights, arbitration, operation of supply chains and other topics relevant to the elaboration of the Hague Rules.

In October 2018, the Drafting Team launched a first public consultation on an Elements Paper, a compilation of issues concerning business and human rights arbitration with a series of questions posed in order to garner input. The Elements Paper was sent to the members of the Sounding Board and posted on the project’s page on the CILC website (www.cilc.nl). In response to numerous comments on the Elements Paper, a summary of which was published on the project website, the Drafting Team prepared a first draft of the Hague Rules, along with a draft Commentary. In June 2019, the consolidated draft was posted on the CILC website for a second round of consultation with the members of the Sounding Board and the broader public. Individual members of the Drafting Team and Working Group also publicized and discussed the proposal and the draft Rules with various stakeholders. Based on the reactions to the consolidated draft, the Drafting Team revised and finalized the Hague Rules and Commentary. The final text was officially launched at a ceremony in The Hague on 12 December 2019.

The work of drafting the Hague Rules and related activities of the project were funded by the City of The Hague and supported by the Ministry of Foreign Affairs of the Netherlands. The Drafting Team expresses its appreciation to CILC as hosting partner of the project and to Manon Tiessink for superlative support.

The Hague Rules on Business and Human Rights Arbitration provide a set of procedures for the arbitration of disputes related to the impact of business activities on human rights. The Hague Rules are based on the Arbitration Rules of the United Nations Commission on International Trade Law (with new article 1, paragraph 4, as adopted in 2013) (the “UNCITRAL Rules”), with modifications needed to address certain issues likely to arise in the context of business and human rights disputes. Each article is accompanied by a commentary, which includes background on the drafting of various provisions in the Rules, explaining in particular the reasons for possible deviations made from the UNCITRAL Rules. The Commentary may be useful in interpreting and applying the Rules, but it is not part of the Hague Rules.

As with the UNCITRAL Rules, the scope of the Hague Rules is not limited by the type of claimant(s) or respondent(s) or the subject-matter of the dispute and extends to any disputes that the parties to an arbitration agreement have agreed to resolve by arbitration under the Hague Rules. Parties could thus include business entities, individuals, labor unions and organizations, States, State entities, international organizations and civil society organizations, as well as any other parties of any kind. Equally, the Hague Rules purposefully do not define the terms “business,” “human rights” or “business and human rights.” For the purposes of the Hague Rules, such terms should be understood at least as broadly as the meaning such terms have under the UN Guiding Principles on Business and Human Rights. However, in the vast majority of cases, no definition of these terms should be necessary at all.

Like the UNCITRAL Rules, the Hague Rules do not address the modalities by which the parties may consent to arbitration nor the content of such consent. As with all arbitration, proper and informed consent remains the cornerstone of business and human rights arbitration. Such consent can be established before a dispute arises, e.g., in contractual clauses, or after a dispute arises, e.g., in a submission agreement (compromis). The Model Clauses found in the Annex to the Hague Rules may provide potential parties with options for expressing their consent to arbitration in various contexts and instruments. The Hague Rules also do not address enforcement of arbitral awards, which are governed by national laws and various treaty obligations, including in most cases the 1958 New York Convention on the Recognition and Enforcement of Foreign Arbitral Awards. Lastly, the Hague Rules do not address other modalities for ensuring compliance with an award, such as monitoring by intergovernmental institutions, non-governmental organizations or multi-stakeholder initiatives.

Although the Hague Rules attempt to lower barriers to access to remedy, arbitration under these Rules is meant to be employed where it is reasonable to presume that all parties have a minimum of resources at their disposal to cover the basic costs of the arbitration and their own representation, either by themselves or through a “legal aid” system, contingency funding or an agreement on the asymmetric distribution of costs and deposits between the parties.

The Rules use the pronouns “they,” “their” and “them” as both singular and plural pronouns.