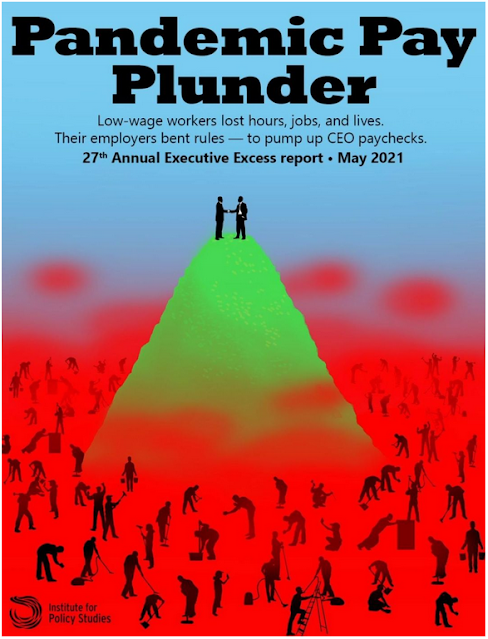 Plague accelerates even as it transforms. There is no magic to plague; it operates in the environment in which it appears, and is both constrained by that environment (technology, societal taboos, hygiene and the like) and provides it with the openings through which rising societal contradictions, of its discontents, might be resolved or the level of their intensity advanced. One sees both in the wake of COVID-19. (Larry Catá Backer, “The Metamorphosis of COVID-19: State, Society, Law, Analytics” Emancipating the Mind in the New Era: Bulletin of the Coalition for Peace & Ethics 15(2):261-352, 264-265 (View HERE))

One has evidence of the accelerator effect in virtually every aspect of human organization, and some of the consequences have been quite profound ("Hong Kong Between 'One Country' and 'Two Systems': Essays from the Year that Transformed the Hong Kong SAR (June 2019 – June 2020)--Preface Essay Summaries and Table of Contents).  Now one has some evidence of its effect on a long term trend in liberal democratic states--the growing gap between lowest waged earners and the chief executives of the more potent enterprises in the global order. The trend is not so much about the classical Marxist obsession with the centralization of the ownership of capital--indeed, Marxist Leninist states exemplify that concentration to the fullest especially where the state becomes the most significant capitalist in a society still evolving toward communism.  No. . . the  real and usually missed trend centers on the way in which the top of enterprise hierarchies are increasingly capturing the value added of enterprise labor for themselves. This is reflected in the increasing gap between the wage rates for the elite workers at the top of institutional hierarchies--whose work is viewed as unique and a function of individual talent-- and the workers at the bottom of internal production--the large mass of fungible humans whose labor is undifferentiated and consumed.  Fidel Castro ironically saw int in the 1980s but was going to listen to him especially when the insight was embedded in less relevant  objectives (see HERE). And the trajectory runs parallel to another--the way that global production chains also capture for the apex organizations a substantial proportion of the value added of production from the sourcing of raw materials to the sale of finished products to consumers.

This intuition now appears to have some additional supporting basis. The Institute for Policy Studies has recently released its Report: Pandemic Pay Plunder: Low-Wage Workers Lost Hours, Jobs, and Lives. Their Employers Bent the Rules — To Pump up CEO Paychecks. Written by Sarah Anderson and Sam Pizzigati, the Report, in the words of the press release of the IPS, seeks to document the way that

corporate boards are performing cartwheels to protect huge paychecks at the top of our corporate hierarchies. Over half of America’s largest low-wage employers, we found, bent the rules to boost CEO pay last year — even as essential workers took the biggest risks to keep the economy running. This kind of greed left working families much more vulnerable even before the COVID-19 crisis, with nearly 40 percent of Americans unable to afford a $400 emergency. During the pandemic itself, it spelled catastrophe for ordinary families. Meanwhile, corporate chief executives in the United States have continued to score the sorts of windfalls that have ballooned billionaire wealth by over $1 trillion since the pandemic began. Our corporate compensation practices have, in effect, delivered prosperity for the few and precarity for the many.

None of this should come as a surprise.  And, indeed, the pandemic, and assirted other manufactured diversions, tend to keep the masses focused on virtually anything but money--that is the mney that they donate to the elite workers who are capturing for themselves their value added to the economic activity form which the enterprises that but their labor profit.  Little changes; COVID merely accelerates.
The Report is worth reading, but I suspect that it will generate very little heat as elites manage the narrative of challenge to focus popular attention on other matters that may be less threatening to them and their incomes. The KEY FINDS follow below along with Appendix1: The 100 S&P 500 companies with the lowest median worker wages (2020 data).

The Report may be accessed HERE.