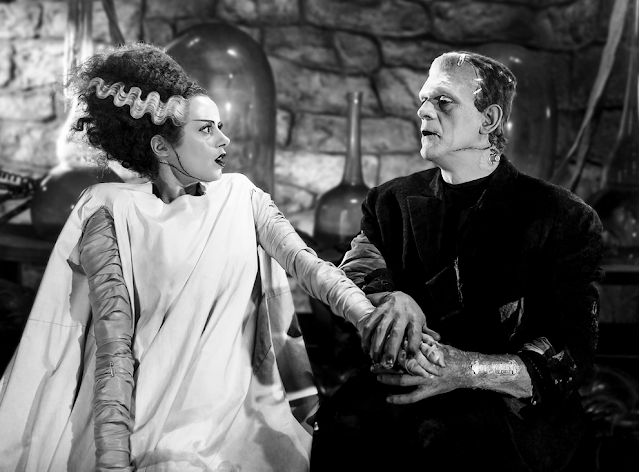 Pix: The Bride of Frankenstein (1935--Boris Karloff and Elsa Lanchester)

‘It was on a dreary night of November that I beheld the accomplishment of my toils. With an anxiety that almost amounted to agony, I collected the instruments of life around me, that I might infuse a spark of being into the lifeless thing that lay at my feet. It was already one in the morning; the rain pattered dismally against the panes, and my candle was nearly burnt out, when, by the glimmer of the half-extinguished light, I saw the dull yellow eye of the creature open; it breathed hard, and a convulsive motion agitated its limbs.’ (M. Shelley, Frankenstein or the Modern Prometheus (Lackington Hugh Harding Mavor & Jones, 1818), ch. 5)

It was with that quote that I began my essay, Pragmatism Without Principle?: How a Comprehensive Treaty on Business and Human Rights Ought to be Framed, Why It Can’t, and the Dangers of the Pragmatic Turn in Treaty Crafting which eventually appeared as a contribution that that marvelous collection of essays edited by David Bilchitz and Surya Deva, Building a Treaty on Business and Human Rights: Context and Contours (Cambridge University Press, 2017, pp. 105-130; pre publication version HERE).  I suggested there that

the fundamental difficulties of coherence in the project of human rights legalization at the international level.82 It also suggests, again, the difficulties of legalization as a basis for the regulatory governance of societal behaviours in the economic sphere. That difficulty is augmented precisely because all stakeholders have been united in the objective of achieving a treaty, but not on the principles that must be given effect by its provisions (and against which the choice among provision ought to be made).(Ibid).

Well; seven years into the process it is possible to believe (and indeed this is a faith based project more than anything else), that a measure of coherence has been achieved.  That achievement highlights the remarkable process of assembling a community of believers (and flushing the rest) around whom the process of engagement could be managed to produce (at least) the document that expressed (if in somewhat ambiguous and idealized form), the legalized aspirations of the belief community that has worked so hard to find expression for its political principles into a document that aspires to legal effect.
That it does not work as law (but perhaps as an ideological statement certainly) has been expressed  (for a detailed deconstruction, see Bulletin of the Coalition for Peace & Ethics,Volume 14 No. 2 (Special Issue) Commentary on the U.N. Inter-Governmental Working Group (Geneva) 2019).

Forthcoming: Open consultations on the implementation of resolution 26/9

At the final meeting of its sixth session, the Open-ended intergovernmental working group on transnational corporations and other business enterprises with respect to human rights (OEIGWG) took note with appreciation of the recommendations of the Chair-Rapporteur and looked forward to the third revised draft legally binding instrument, the informal consultations, and the programme of work for its seventh session, which will be held from 25 to 29 October 2021, as a follow up to the implementation of the mandate of HRC resolution 26/9.

In that regard and in line with the Chair-Rapporteur's recommendation 43. (e) as contained in the report on the 6th session of the Open-ended intergovernmental working group on transnational corporations and other business enterprises with respect to human rights (A/HRC/46/73), the Chair-Rapporteur will hold two open informal consultations with Governments, regional groups, intergovernmental organizations, United Nations mechanisms, civil society and other relevant stakeholders, as one of the basis for the preparation of the third revised draft legally binding instrument. The two planned consultations will take place in accordance with the following details:

The agenda for the open consultations

Kindly note that registration on Indico will enable the Secretariat to send the link to registered participants.

The two consultations will be a complement to the discussions held during the sixth session of the OEIGWG; the compilation of written statements; the two matrices compiling respectively (1) concrete textual suggestions, modifications, additional language and requests for deletions, as well as expression s of support, concerning the current provisions of the second revised draft legally binding instrument; and (2) general comments and requests of clarifications, in accordance with the Chair-Rapporteur's recommendation 43 (a)–(b); and other related activities undertaken by the Chairmanship in preparation of the seventh session of the OEIGWG.

The compilation of statements, as well as the two matrices mentioned above, can been found on the website of the OEIGWG at: OHCHR | Session6 Sixth session of the open-ended intergovernmental working group on transnational corporations

The participation of other relevant stakeholders in the consultations mentioned above will follow the procedure of the previous sessions of the OEIGWG, without prejudice to any additional information to be posted on the website of the Working Group.

For further enquiries, please send a message to igwg-tncs@ohchr.org.

All might consider participating in the open consultations to the extent that is permitted.  It is possible that such engagement will be noted or even have effect. But more importantly, it will deepen the process of self engagement with a project that eventually, when it emerges from its safe drafting space, will have to be confronted and supported, challenged, or otherwise engaged. The Agenda for the Inter-sessional open consultations follow below.  Mary Shelly's Frankenstein; or, the Modern Prometheus may be accessed HERE.

Preamble and Articles 1 to 7 of the revised draft LBI, with special focus on: