Frank S. Ravitch and Larry Catá Backer Discuss the Student Initiated Prayer and Moment of Silence Cases (Santa Fe Independent School Dist. v. Doe, 530 US 290 (2000); Wallace v. Jaffree, 472 US 38 (1985)); The Challenges of Interpretation and the Dangers of Reading Religion Out of Constitutional Context 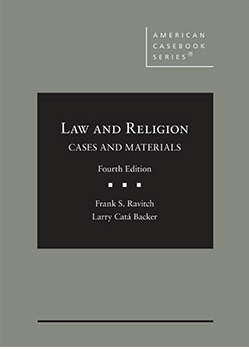 For our next conversation we consider the germinal cases on student initiated prayer (Santa Fe Independent School Dist. v. Doe, 530 US 290 (2000)) and the moment of silence case (Wallace v. Jaffree, 472 US 38 (1985)). These are rich opinions on several levels, each of which we explore. On one level the cases suggest the popular response and resistance to the Supreme Court's jurisprudential effort to better detach religion from its entanglement with school officials and institutions. The questions considered revolved around the place where the lines are drawn between private conduct (free speech protected) and public entanglement (Establishment Clause constraints). At another level the cases suggest the conceptual and applied challenges of interpretation--of text, of intention, and of original understanding. These suggest the application of the core issues central to hermeneutics and semiotics (each bringing a different though related conceptual toolkit) to understanding the underlying struggles of the judiciary to find a means of detaching their decisions from their personal preferences. These lenses then help rationalize the ambiguity and "margins of plausibility" that define the parameters of Establish Clause jurisprudence. At the same time the cases expose the consequences of that ambiguity--and the way it opens the door to the construction of ranges of plausible determinations from contextually specific situations. These notions are nicely exposed in the inconsistencies in the way that the Supreme Court reads intent into the actions of the government after their initial projects are challenged. To that end we contrast the way that amendment in the face of challenge was read to show negative intent in Wallace, against the way that such modification was read as evidence of good intent in Town of Greece v. Galloway (572 US 565 (2014) (legislative prayer), and the way such modification was read as evidence of "bad" intent in McCreary Cty v. ACLU of Kentucky (545 US 844 (2005)(Ten Commandments display). Lastly the cases suggest the difficulty of reading the Religion Clauses in a constitutional vacuum. To that end we debate the importance of the way the majority approached the importance of elections and their character, as well as their validity as an expression of popular will in the context of the application to free exercise and Establishment.