Frank Ravitch and Larry Catá Backer on Engle v. Vitale, 370 US 421 (1962), and Sch Dist Abington Twnshp v. Schempp, 374 US 203 (1963)-- Of School Prayer; Neutrality; the Triumph of Secular Purpose and Effects Tests; and the Temptations of Interpretation

For our first conversation we focused on Fulton v. City of Philadelphia, 593 U.S. -- (2021), which  was decided on 17 June 2021. The case was particularly interesting because at least in some quarters it was viewed as the opportunity to repudiate what is left of the still controversial decision of Employment Division, Department of Human Resources of Oregon v. Smith, 494 U.S. 872 (1990).  Our second discussion considered  Everson v. Board of Education of Ewing Tp., 330 U.S. 1 (1947), the germinal case of the modern era of federal constitutional jurisprudence of the Religion Clauses and the source of many of the concepts and principles at the heart of jurisprudential battles today. 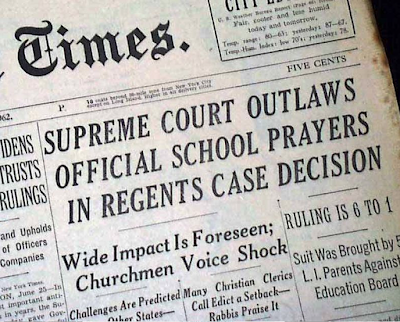 For our next conversation we consider the "big bang" school prayer cases: Engle v. Vitale, 370 US 421 (1962), and Sch Dist Abington Twnshp v. Schempp, 374 US 203 (1963). The cases produced the first efforts at a test or standard for applying the Establishment Clause.  It began carving out education as a special case for the application of Establishment Clause principles, and it began developing the discourse of neutrality that would eventually become a very large part of the jurisprudence. Here one encounters the touchstones of secular purpose and effects in a more developed form; here also one is introduced to the challenges of disciplining interpretation of these standards in a context n which there was substantial differences among groups that cared very much about the issues.