UN Resolution A/ES-11/L.4 (Suspension of the Rights of Membership of the Russian Federation in the Human Rights Council) 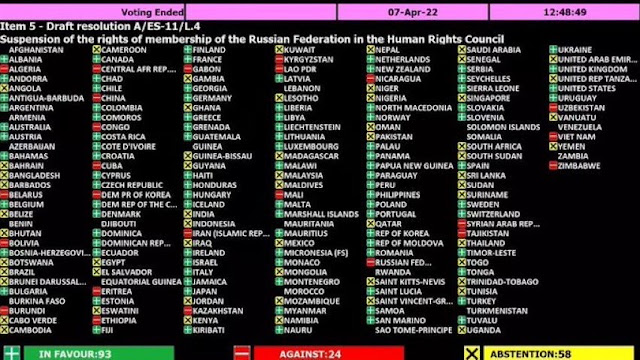 On 7 April 2022 the UN General Assembly approved Resolution A/ES-11/L.4 (Suspension of the Rights of Membership of the Russian Federation in the Human Rights Council).

"We reject the untruthful allegations against us based on staged events and widely circulated fakes," Kuzmin told the General Assembly before the vote, defending Russia's record as a Human Rights Council member.

"Such a hasty move at the General Assembly, which forces countries to choose sides, will aggravate the division among member states, intensify the confrontation between the parties concerned - it is like adding fuel to the fire," China's U.N. Ambassador Zhang Jun said before the vote. (United Nations suspends Russia from human rights body over Ukraine)

The Text of the Draft Res. A/ES-11/L.4 follows. The Russian delegation response is extraordinarily rich with irony. Yet what will linger is the quite astute observation of the Chinese delegation--states have been asked to choose sides. To China's chagrin that choice was put to the fracturing global order before it was prepared to maximize its own benefit from the action. And yet here we are. States have been asked to take sides. They have done so, at least in this first preliminary round.  The consequences of these choices will become better exposed in the coming months. What is beginning to appear on the near horizon, however, are the alignments of dependency that mark both the border and peripheries of emerging bi-polar systems.

Recalling its resolution 60/251 of 15 March 2006, in particular paragraph 8, which states that the General Assembly may suspend the rights of membership in the Human Rights Council of a member of the Council that commits gross and systematic violations of human rights,

Taking note of Human Rights Council resolution 49/1 of 4 March 2022, in particular the grave concern of the Council regarding reports of gross and systematic violations and abuses of human rights and violations of international humanitarian law committed by the Russian Federation during its aggression against Ukraine,

1. Decides to suspend the rights of membership in the Human Rights Council of the Russian Federation;

2. Also decides to review the matter, as appropriate;