John Ruggie, the Special Representative of the Secretary General for Business and Human Rights has been proceeding with the production of the final set of documents that elaborate the framework for the regulation of business and human rights that he has overseen since his appointment as SRSG.  For those following the progress of the development of the framework and its incarnation as Guidelines and supporting documents, the following material may be useful for study.

In March 2011, Special Representative Ruggie published his final report to the UN Human Rights Council, which included Guiding Principles for the implementation of the UN "Protect, Respect and Remedy" Framework that he had proposed to the Council in 2008 and that the Council had unanimously approved:

"Report of the Special Representative of the Secretary-General on the issue of human rights and transnational corporations and other business enterprises, John Ruggie - Guiding Principles on Business and Human Rights: Implementing the United Nations 'Protect, Respect and Remedy' Framework" [PDF], 21 March 2011

Addendum 2: Human rights and corporate law: trends and observations from a cross-national study conducted by the Special Representative [PDF], 23 May 2011

Addendum 3: Principles for responsible contracts: integrating the management of human rights into State-investor contract negotiations: guidance for negotiators [PDF], 25 May 2011

This page includes statements to the UN Human Rights Council regarding the Special Representative's 2011 report and the Guiding Principles. Please send any statements that do not appear here to Greg Regaignon, regaignon@business-humanrights.org

Association for Progressive Communications: Oral Statement to the Human Rights Council, 30 May 2011

ActionAid, Amnesty International, ESCR-Net, FIDH, Human Rights Watch, International Commission of Jurists, Rights & Accountability in Development & 48 other NGOs: Advancing the global business and human rights agenda: Follow-up to the work of the Special Representative of the Secretary-General [PDF], May 2011

What is emerging is a framework structured in pyramidal form.  At the top of the pyramid are the set of Guiding Principles, designed to express in the broadest general terms the overarching framework within which the obligations and rights of critical parties are specified.  These are then augmented by a set of more detailed glosses that add context and advice, principally to corporations, on the manner and form of compliance. These, in turn, are supplemented by a more detailed set of supporting documents that serve both as justification and as a set of potential best practice standards beyond the core of the principles expressed through the Guidelines. The resulting complex of documents spiral out from generality to specificity, from principal to practice, and from formal governance code to informal guide. 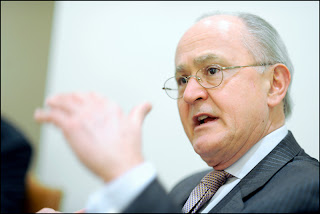 Professor Ruggie's presentation to the U.N. Human Rights Council is reproduced here and provides substantial and valuable insight into the process and final product: