The Chinese State organs continue the long term project of constructing state institutions with Chinese characteristics that remain true to the founding political ideology of the political order.  To that end the Chinese government has announced  the abolished the Laojiao (劳动教养), or "re-education through labor" system (often referred to as the "Chinese labor camp" system in the West). 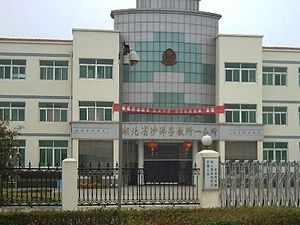 (A photograph of Shayang Re-education Through Labor camp in Hubei province, from the archives of the Laogai Museum)


This is an important development.  It comes at a time when a number of  Chinese netizens were scrutinizing that "extra-judicial" system.

There was a sense that the laojiao system was likely to be substantially reformed in 2012.

The discussion reinvigorated a debate about various proposed changes to the laojiao system that lawmakers have discussed at annual meetings of National People’s Congress in the past several years.

Ying Yong, president of Shanghai High People’s Court, is one of them.

He noted in a proposal submitted during this year’s NPC session, held in March in Beijing, that the system has contributed greatly to social order and improved economic development. Even so, the country finds itself amid different circumstances than were present 50 years ago and has established a legal system. Laojiao should therefore be modified, he said.

Because the penalties under laojiao can exceed even the six-month minimum penalty for criminal offenses, Ying said, that undermines the notion that laojiao is imposed on suspects whose deeds have been not serious enough to constitute crimes.

He said the system should have been modified after the Administrative Coercion Law went into effect in 2012. (Zhao Yinan, Lawyers calling for reform of laojiao system, China Daily, Aug. 16, 2012)

BEIJING, Jan. 7 (Xinhua) -- The Chinese government will advance reforms for its controversial re-education through labor system this year, according to a national political and legal work conference held on Monday.

The system allows police to detain people for up to four years without an open trial, leading experts to argue that it contradicts high-level laws, including China's constitution.

No further information on the reforms has been made available.

Last month, a court in southwest China's Chongqing municipality rejected an appeal from Ren Jianyu, a 25-year-old village official who was sentenced to two years in a re-education through labor camp in September 2011 for spreading "negative information" and inciting the subversion of state power.

Last August, a woman in central China's Hunan province was sentenced to 18 months in a labor camp after demanding tougher penalties for seven men who were convicted of abducting, raping and prostituting her 11-year-old daughter.

Tang Hui, a crusading mother who petitioned courts and local government officials for tougher penalties for her daughter's captors, was released within a week following complaints from academics, state media and the public.

According to the Bureau of Re-education Through Labor under the Ministry of Justice, 160,000 people were imprisoned in 350 re-education through labor centers nationwide as of the end of 2008.

Jiang Wei, a senior official in charge of judicial reforms, said last October that the necessity of the reforms had been recognized and a related plan was being formulated.

Because Laojiao can be understood as the civilian equivalent of the Shuanggui (Part discipline) system, it is possible that these moves may potend at least some revisions ot the current form or operation of the Shuanggui system, and perhaps, even its abolition.  What it will be replaced with is unclear. On the other hand, even though the techniques are similar, Shuanggui serves very different purposes and is targeted to a group of people with substantial political obligations as members of the Party in Power.  Laojiao, on the other hand, targets the masses, and in that sense duplicates and to some extent subverts the administrative order created through the governmental system created through the Chinese Constitution. It is unnecessary. Shuanggui deals with political, rather than administrative, breaches that touch on the disciplinary functions of the Party.  It is in this sense beyond the competence of the administrative authories represented by the government apparatus. This may produce some refinement in the Shuanggui system but not necessarily its elimination.
Posted by Larry Catá Backer at 1/07/2013 02:17:00 PM