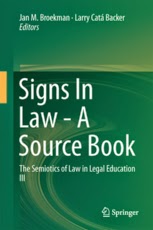 
This from the back cover:

This volume provides a critical roadmap through the major historical sources of legal semiotics as we know them today. The history of legal semiotics, now at least a century old, has never been written (a non-event itself pregnant with semiotic possibility).  As a consequence, its sources are seldom clearly exposed and, as word, object and meaning change, are sometimes lost. They reach from an English translation of the 1916 inaugural lecture of the first Chair in Legal Significs at the Amsterdam University, via mid 20th century studies on “property” or “contract,” to equally fascinating essays on contemporary semiotic problems produced by former students of the Roberta Kevelson Semiotics Roundtable Seminar at Penn State University 2012 and 2013. Together, the materials in this book weave the fabric of semiotics and significs, two names for the unfolding of semiotics in law and legal discourse at least until the second half of the 20th century, and both of which covered a lawyer’s focus on sign and meaning in law.  The latter is embedded within the cultural imperatives of the civilization that gave these terms meaning and made them an effective tool for the dissection of law, its reconstitution as an instrument to be used by the lawyer to advance the interests of her clients, and for judges as a means to restructure language as a narrative of law whose power could bend behavior to its strictures. Legal semiotics has become an indispensable part of the elite lawyer’s toolkit and a fundamental approach to analysis of legal texts. Two previous volumes published in 2011 and 2012 explored the conceptual, methodological and epistemological progress in the field of legal semiotics, the modern forms of semiotics study, and the mechanics of meaning making processes by lawyers. Yet the great lessons of semiotics requires a focus on the origins of the concepts and frameworks that would become contemporary legal semiotics, its origins as an object of the consciousness of meaning making—one whose roots, as lessons for the oracular conversations of law, are expanded in this volume.