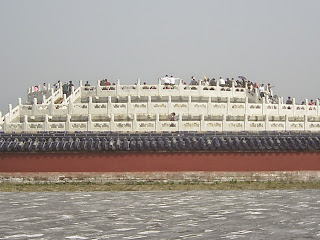 
I have posted the conference program of the 9th Annual Conference of the European China Law Studies Association, with its theme, “Making, Enforcing and Accessing the Law” (HERE).

My colleague Beth Farmer, Professor of Law and International Affairs, and McQuaide Blasko Faculty Scholar at the Penn State Law School delivered an excellent paper at the Conference's Panel on "Making, Enforcing and Accessing Law."

Her paper was entitled "Resolving Competition Related Disputes Under the AML." The POWERPOINT presentation may be accessed here.

A summary of the paper follows:

This paper was presented at the 2014 ECLS annual conference at The Chinese University of Hong Kong, Nov. 15 – 16, 2014, on the theme of “Making, Enforcing and Accessing the Law” and discusses recent developments in private antitrust litigation under the 2008 Anti-Monopoly Law. Briefly, government agency enforcement, other than merger regulation, has only recently increased after a series of regulations and guidelines were drafted and adopted, and the SPC promulgated its 2012 Judicial Interpretation. Private litigation, on the other hand, has been active since the first case was filed in 2009, and the current number of cases approaches several hundred. Beyond the numbers, the private causes of action had principally focused on abuse of dominance claims and were uniformly unsuccessful. More recently, private litigants have pursued monopoly agreement claims alleging resale price maintenance, with a notable plaintiff victory in the Johnson & Johnson case. A few private complaints have included allegations of administrative abuses and it may be predicted that recent amendments to the Administrative Litigation Law (or Administrative Procedure Law) may facilitate further activity. Finally, the paper identifies open issues for clarification, including indirect purchaser standing, damages, collective actions, extraterritorial application, transparency in substantive analysis, and follow-on actions to agency enforcement.