Ruminations 60: Why the Federal Court was Wrong to Release Ms. Davis the Kentucky County Clerk 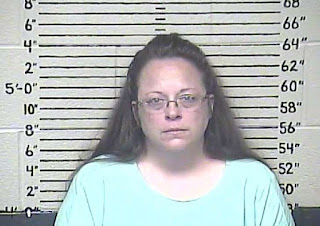 It has been reported that "Just hours before a big rally to call for Kim Davis' release, a federal judge has ordered that she be released from jail." (Eyder Peralta, Just Before Big Rally, Kim Davis Is Released From Jail, NPR, Sept. 8, 2015).

Kim Davis, the Kentucky county clerk who was jailed last week after she defied a court’s order that she issue marriage licenses to same-sex couples, was ordered released on Tuesday.

In a two-page order issued Tuesday, the judge who sent her to jail, David L. Bunning of Federal District Court, said he would release Ms. Davis because he was satisfied that her office was “fulfilling its obligation to issue marriage licenses to all legally eligible couples.”

Judge Bunning ordered that Ms. Davis “shall not interfere in any way, directly or indirectly, with the efforts of her deputy clerks to issue marriage licenses to all legally eligible couples.” He said any such action would be regarded as “a violation” of his released order.  (Alan Blinder, Kim Davis Freed From Jail in Kentucky Gay Marriage Dispute, The New York Times, Sept. 8, 2015).


In a prior post I suggested that in the case of religious dissent by an elected official, it is important to separate the person--entitled to respect for her beliefs--from the office, with respect to which the religious sensibilities of individuals cannot play any part (Ruminations 59: On the Follies of Using Criminal Contempt Against Religious Dissenters; Ought this to be a Question of Legal Capacity?).

In this post I suggest that this separation of person from office  requires the court faced with religious dissidents in elective office who use the power of their office to project their religious dissent, however framed, to either declare that official legally incapacitated to serve in office to, as the court did to Ms. Davis, to separate the individual from her office by detaining the individual.  The failure to do either--and to continue to do either in the face of efforts to leverage religious dissent in office--may substantially weaken the legitimacy of the office for the protection of which action was taken in the first place.


From a purely functional perspective, t think this was a sensible decision.  It was sensible because the office of the clerk has begun to work in fact without regard to Ms. Davis' religious views.  Though she retained her office, she was effectively constrained from interfering with its operation.  It was as if she wasn't there.  This functionalism in decision-making--the court got what the judge wanted--the county clerk's office to issue marriage licenses to all qualifying couples seeking them.  That, for many courts and many judges is sufficient in itself to secure the rights protected and to protect the integrity of the judicial process and the administrative and governmental apparatus.


The release order requires that Davis “shall not interfere in any way, directly or indirectly, with the efforts of her deputy clerks to issue marriage licenses to all legally eligible couples.” If she refuses — as she seemed to promise to do last week — she would again be held in contempt.

The lawyers for the deputies issuing licenses were also ordered to file a “Status Report” every 14 days to confirm their compliance with the order. They are forbidden from following Davis’ “no marriage licenses” policy should she try to enforce it again. (Zach Ford, Kim Davis Released From Jail, With Conditions, Think Progress, Sept. 8, 2015).

The judicial approach was thus purely pragmatic.  The order was designed that way. As long as licenses were being issued, the court was satisfied.  The consequences for the integrity of the office were essentially ignored, as the religious beliefs of the individual office holder had been sidestepped in issuing the contempt order.  But this single minded focus on the pragmatic side of the issue has exposed the weakness of that approach for the long run.

The danger here is that Ms. Davis and those who support her tend to view the issues from a formalist perspective (e.g., here). And therein lies the danger  for the court's decision to release Ms. Davis without resolving the issue of her relationship to her office.


Ms. Davis’s deputies began issuing marriage licenses to same-sex couples after she was jailed. In a signal of the possible courtroom battles to come, Ms. Davis’s lawyers have questioned whether those licenses are valid, but Rowan County officials have insisted they will be recognized. (Alan Blinder, Kim Davis Freed From Jail in Kentucky Gay Marriage Dispute, The New York Times, Sept. 8, 2015).

And here is the problem for the formalist: what the judge did had no formal effect on the position of the clerk or the authority of the holder thereof.  Because Ms. Davis retained the office, it was the court's actions rather than the clerk's that might be subject to invalidation.  Indeed, it would not be surprising if Ms. Davis' lawyers sought to find a way to attack those marriage certificates.  In the end, it is likely that these attacks would not succeed in their direct object.  But they might succeed in weakening the integrity either of the courts and judicial process of oversight, or they might weaken respect for the integrity of the apparatus of government.  Either way, a formal victory will produce a substantial defeat for the legitimacy of our system, torn asunder not by the sectarian differences that divide us, but by the willingness to play out those sectarian differences within the structures of the government that is supposed to unite us without regard to our differences (or despite them).

For these reasons, it might have been better for the court either to continue to follow its current course and keep Ms. Davis jailed--the best of a bad pragmatic and ancient choice.  Or the court might have paid more attention to the formal legal issues and moved to declare Ms. Davis unable to hold office, find a way to remove her and then recognize someone else as the acting clerk.  To the extent that might require the cooperation of state courts, the court should have followed through.
Posted by Larry Catá Backer at 9/08/2015 03:27:00 PM