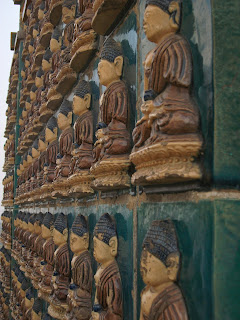 
This Blog Essay site devotes every February to a series of integrated but short essays on a single theme. For 2015 this site introduces a new theme: On a Constitutional Theory for China--From the General Program of the Chinese Communist Party to Political Theory.


[18] The Communist Party of China leads the people in promoting socialist ecological progress. It raises its ecological awareness of the need to respect, accommodate to and protect nature; follows the basic state policy of conserving resources and protecting the environment and the principle of giving high priority to conserving resources, protecting the environment and promoting its natural restoration; and pursues sound development that leads to increased production, affluence and a good ecosystem. The Party strives to build a resource-conserving, environmentally friendly society; and preserves China's geographical space and improves its industrial structure and mode of production and the Chinese way of life in the interest of conserving resources and protecting the environment. All this is aimed at creating a good working and living environment for the people and ensuring lasting and sustainable development of the Chinese nation.
[18] 中 国共产党领导人民建设社会主义生态文明。树立尊重自然、顺应自然、保护自然的生态文明理念，坚持节约资源和保护环境的基本国策，坚持节约优先、保护优先、 自然恢复为主的方针，坚持生产发展、生活富裕、生态良好的文明发展道路。着力建设资源节约型、环境友好型社会，形成节约资源和保护环境的空间格局、产业结 构、生产方式、生活方式，为人民创造良好生产生活环境，实现中华民族永续发展。


This is a more recent addition and evidence of the possibilities when the CCP asserts its leadership role to emancipate the mind in th service of socialist modernization. It grows naturally out of the CCP basic line and the scientific outlook on development. It grows from the consequences of advancing economic development and the need to reorder that progress in a way that permits sustained growth. Ecological progress is only possible in the face of economic success and thus represents an example of a response to a new historical stage in the progress of socialist modernization.  But that movement form stage to stage must be undertaken within the constraints of cultural development, socialist democracy and the objective of social harmony.   Each of these is evident in ¶ 18.

Second, ecological progress is given priority in policy, but only to the extent that such policy drives ecological progress "pursues sound development that leads to increased production, affluence and a good ecosystem." It is in this respect that one can understand the constraints the CCP's leadership role in raising awareness of the "need to respect, accommodate to and protect nature." Likewise it frames the understanding of the "basic state policy of conserving resources and protecting the environment." Lastly, it shapes the character of the "principle of giving high priority to conserving resources, protecting the environment and promoting its natural restoration." Taken together, the policy speaks to developing productive resources less wastefully and more efficiently over a long time horizon. That is the sense in which ecological progress must be understood. Ecological protection for its own sake is not contemplated. Ecological progress must be justified by its effect on enhancing economic progress and socialist modernization ("All this is aimed at creating a good working and living environment for the people and ensuring lasting and sustainable development of the Chinese nation").

Third, ¶ 18 specifies a number of particular policy choices for environmental sustainability, and a regulatory framework within which the appropriate ministries and legislative bodies may act under the leadership of the CCP. "The Party strives to build a resource-conserving, environmentally friendly society; and preserves China's geographical space and improves its industrial structure and mode of production and the Chinese way of life in the interest of conserving resources and protecting the environment." The objective is to strive to build--it is not to accomplish. The verb sounds in long term rather than short term goals. Striving does not require anything more than some forward movement and not accomplishment of the underlying goal. Nor does it require, once the goal is sustained, that such progress is preserved. One can expect then some measures but most looking to attainment in the future. The policy measures are quite specific: resource conservation, and societal awareness of environmental sustainability. Neither is an onerous objective. The first suggests a confirmation of long term policy to seek out and control resources outside of China. The second is bound up in both the scientific outlook on development and the CCP leadership line of building a socialist harmonious society.