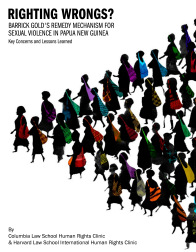 The Report is available at www.rightingwrongsporgera.com (and can be downloaded HERE). We thought it might be of interest to some of you to use in your classrooms when discussing remedies and non-judicial mechanisms.

The report examines a range of issues, including the adequacy of the remedies, the implications of legal waivers in such contexts, and security and accessibility concerns. The mechanism provided 120 rape survivors with some counseling and healthcare as well compensation (less than $6,000 USD for each survivor). Despite the gross power imbalance between the company and the women, in order to receive the remedy packages, the women also had to waive their legal rights to sue the company. Concerns about the process were heightened this year when eleven women who were able to obtain U.S. lawyers were, in a separate process, given approximately ten times greater remedies.

The report is designed to draw out both positive aspects associated with such remedial efforts as well as concerns such mechanisms raise when dealing with serious human rights violations. The report looks to draw broader lessons learned for companies and the international community about non-judicial company-created grievance mechanisms.