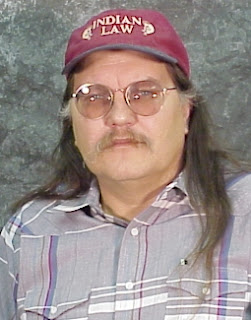 
It is my sad duty to report the death of my former colleague, G. WIlliam (Bill) Rice.  Professor Rice was an enrolled member of the United Keetoowah Band of Cherokee Indians in Oklahoma, and served for many years as Associate Professor of Law at the University of Tulsa College of Law. He also maintained his own law practice, and was a founding member of the Spirits of the Land Foundation.

My colleague, Melissa Tatum, Research Professor of Law at the University of Arizona, has been kind enough to write a memorial to the late Professor Rice.  Professor Tatum specializes in tribal jurisdiction and tribal courts, as well as in issues relating to cultural property and sacred places.


It was with a heavy heart that I received the news that my friend and colleague, Bill Rice, walked on this morning. I first met Bill in the fall of 1995, when we both joined the University of Tulsa College of Law. Although we were both new to the law faculty, we were at different stages in our careers. I was about as inexperienced as you can get at that point, with a keen interest in Indian law, but largely self-taught, as Indian law was not even offered as a class at the law school I attended (at least not when I was a student). Bill had a successful career as an attorney behind him, including successfully litigating a case on behalf of a tribe in the U.S. Supreme Court.

I was very lucky as a young Indian law professor to join a faculty with such a wealth of professors with expertise in the field. Instead of being the only Indian law professor, I was one of four, and I took full advantage of that opportunity. Bill and I spent many hours in each others' offices bouncing ideas off each other and brainstorming.

Bill’s career spanned several key decades for Indian law, and his influence was felt at all levels, from his tribal government work (over the course of his career, he served as Attorney General for several tribes, and as a judge for several others) to his work on the international level (he lectured and taught overseas, in addition to participating in several United Nations working groups) to his academic work (he contributed to two editions of the leading Indian Law treatise, authored the first Indian gaming textbook, and was the founding director of Tulsa’s LLM in American Indian and Indigenous Law).


It was particularly a pleasure to watch Bill with the students. His gruff, country boy demeanor hid (although not very well) a very soft and generous heart. He mentored an entire generation of Indian attorneys, and his kind and giving spirit will be missed.
His passing leaves a hole in many hearts, and our thoughts and prayers are with his family, and with all of those whose lives he touched, including mine.


He has held positions at Cornell Law School, University of North Dakota School of Law, University of Oklahoma, and at Antioch School of Law’s Indian Paralegal program. While at North Dakota, Rice was the founding Director of the Northern Plains Tribal Judicial Training Institute. He has participated in the United Nations’ Working Group on Indigenous Populations, Working Group on the Draft Declaration on the Rights of Indigenous Peoples, the Workshop on Indigenous Children and Youth, and the Human Rights Council’s Expert Mechanism on the Rights of Indigenous Peoples.


His book, Tribal Governmental Gaming Law (Carolina Academic Press, 2006) is the first law school level casebook to be published for use in Indian gaming law classes. He is a contributor to the two latest revisions of Felix Cohen’s classic Indian law treatise, the “Handbook of Federal Indian Law,” and has written extensively in the Indian law area. Regularly called upon to speak at scholarly and governmental meetings, his speaking engagements have included presentations to the United Nations’ Workshop on Indigenous Children and Youth, the University of Paris VII – Denis Diderot, The Federal Bar Association’s Indian Law Conference, the Oklahoma Supreme Court’s Sovereignty Symposium, and numerous appearances at functions sponsored by government agencies, major University Law Schools, and Indian Tribes.


Teaching and writing interests include Indian law with an emphasis on the implementation of the UN Declaration on the Rights of Indigenous Peoples and revitalization of the legal and political systems of Indian Tribes; Jurisprudence with an emphasis on the comparison of western and American Indian concepts of law; and Constitutional law. His regularly taught courses include a course on the law of Indian Gaming, Tribal Government, Native American and Indigenous Rights, and American Constitutional Law. He was the founding Director of the LL.M. Degree in American Indian and Indigenous Law, and currently serves as Co-Director of the Native American Law Center at the University of Tulsa College of Law.

A great mind and a great spirit. He will be sorely missed in Indian Country.

It is with a heavy heart that my friend and simply a good ol country boy has walked on. I first met and worked with Bill at the Sac and fox Nation. He was the Attorney General and I was the Director of Real Estate. We both testified together before the U.S. Senate Investigating Committee on Indian Affairs during the turbulent P.L. 638 program. He was a master at legal strategies and a superb legal scholar. But mostly he was my friend. Great spirit, take care of a great man.