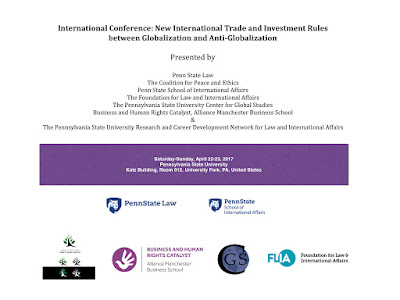 I am happy to announce an upcoming conference at Penn State: New International Trade and Rules Between Globalization and Anti-Globalization. Speakers at the conference will consider the following themes:

1. The United States and China appear to be pursuing distinct strategies toward the organization of international trade and investment. National and international organizations continue to work through the WTO, but regional and other multilateral frameworks appear to supplement or supplant the germinal structures of globalization. This panel considers the form and consequences of these quite significant movements to develop or move from the normative framework of trade of the last half century and to point to the new directions that the organization of trade and finance may be taking.

2. Among the most remarkable developments of the last century has been the rise of the societal sphere and of non-state governance systems. These systems have acquired official recognition through international instruments, the most important of which might be the 2011 U.N. Guiding Principles for Business and Human Rights. This panel explores the scope and development of these non state governance systems, their interactions with legal frameworks at the national and international level, and the nature of its own autonomous operation.

3. One of the important consequences of globalization in economic activity has been the change in the relationship between the state and production. More importantly, there has appeared to emerge new forms of organization of regulatory power within the processes of production itself. This panel will explore the scope and nature of these autonomous regulatory communities, their interactions with traditional centers of power, and their future importance.

4. The explosion of Chinese exports has become one of the most significant events in international trade and investment. China has also been pursuing stronger influence in the global market by proactively engaging in the negotiation of international trade and investment partnerships and agreements. These extend well beyond its One Belt One Road policy and embrace trade, development, infrastructure projects and capacity building with its partners.

Globalization has proven to be a double-edged sword. On the one hand, globalization strengthens commercial and financial interdependence and cooperation among different countries through robust markets and production undertaken through global supply chains. On the other hand, globalization has sometimes increased the gap between both rich and the poor individuals within states, and between developed and developing states. This growing gap follows from the uneven penetration of globalization within states and between them. Both individuals and states participate unequally in the processes and rewards of globalization as an economic, societal, cultural and political phenomenon. It should not surprise, then, that the acceleration and deepening of globalization has also accelerated and deepened resistance among individuals within even the most globalized states, and by states that feel increasingly left behind. In recent years, the rise of anti-globalization movements has had significant effects even within highly developed countries. These contestations of international exchanges, even in certain areas, such as science and the arts, that have a relatively well established foundation, has produced efforts to protect national cultures and values. But the contestations are even sharper in the context of globalizing economic orders and legal norms.

Nevertheless, globalization appears to continue to drive policy and to serve as the crux of contemporary societal development. Over the last decade there has been an intensification of efforts to construct conceptually coherent systems that are meant to facilitate interactions among states relating to the free movement of goods, enterprises, capital, and, to some extent, people across borders. Among these the Trans-Pacific Partnership (TPP) and the negotiation of the Transatlantic Trade and Investment Partnership (TTIP) and Trade in Service Agreement (TISA), driven by Western states, have offered the possibility of a substantially more integrated system of interactions. An emerging alternative has been developed by the People’s Republic of China. Its One Belt One Road (OBOR) Framework promises a different approach and perhaps one that serves developing states better. Both emerging multilateral systems have been challenged by rising popular nationalist sentiments and the possibility of protectionism and the re-emergence of national barriers. Moreover, the recent election in the United States has brought to power an administration that might consider a system of bilateral arrangements a better alternative to the systems represented by TTP-TTIP-TISA, or its OBOR alternatives.

This conference seeks to promote conversation around these themes, including but not limited to the following questions. What are the significant powers promoting or holding back international trade and investment? Will globalization eventually be embraced by the majority? Is it possible to underpin a set of constant norms and rules of international trade and investment? What direction will new international trade and investment Rules lead? To what extent have the endorsement TPP and the negotiation of TTIP and TISA reshaped the international order and impacted people’s lives? To what extent is the OBOR Framework an alternative to or supplement of TTP-TTIP? What is the relationship between bilateralism in trade and multilateral efforts such as TTP or OBOR? What are the effects of resistance to globalization and what are its consequences for the development of global trade? How has the internationalization of civil society and economic enterprises, as the twin pillars of the private sphere, affected the development and structures of globalization?