If Everyone Overplays their Hand Are There any Hands Worth Playing?: Congressional-Executive Commission on China; Statements by Chairs on the “Political Prosecutions” of Umbrella Movement Leaders 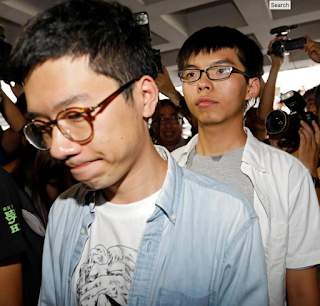 ("Student leaders Nathan Law and Joshua Wong walk into the High Court to face verdict on charges relating to the 2014 pro-democracy Umbrella Movement, also known as Occupy Central protests, in Hong Kong, China August 17, 2017." PIX: Tyrone Siu; Critics cry foul as Joshua Wong and other young Hong Kong democracy leaders get jail (REUTERS 17 August 2017))
The Congressional-Executive Commission on China was created by the U.S. Congress in 2000 "with the legislative mandate to monitor human rights and the development of the rule of law in China, and to submit an annual report to the President and the Congress. The Commission consists of nine Senators, nine Members of the House of Representatives, and five senior Administration officials appointed by the President." (CECC About). The CECC FAQs provide useful information about the CECC. See CECC Frequently Asked Questions. They have developed positions on a number of issues: Access to Justice; Civil Society;Commercial Rule of Law; Criminal Justice; Developments in Hong Kong and Macau ; The Environment ; Ethnic Minority Rights;Freedom of Expression; Freedom of Religion ; Freedom of Residence and Movement ; Human Trafficking ; Institutions of Democratic Governance ; North Korean Refugees in China; Population Planning ; Public Health ; Status of Women ; Tibet ; Worker Rights ; and Xinjiang.

Heading into the end of summer, the internal and external relations of the People's Republic of China and the United States, respectively, have entered a sensitive time. Externally, both states face a number of challenges, some of them creatures of their own creation, and now in some respects substantially out of their effective control.  More interestingly, both states now face a number internal challenges that may trigger decisions with wider consequences. In the United States, the civil war among elites, deploying shock troops at the fringes of the political spectrum reminds one of early Weimar Germany and with that reminder, of the possibilities for destabilization. China finds itself weeks from its Communist Party Congress.  These are always, even in the best of times, sensitive periods where the exercise of inter-party democratic centralism can produce significant effects on the trajectories of senior Party cadres and substantially affect the meaning and application of the Basic Line of the Communist Party.  It is no surprise, then, that the run up to the 19th Communist Party Congress might also produce stress.
It is in this environment, one where internal stresses may suggest the need for action, that key officials or institutions might be tempted to overplay their hands, that is, to threaten one's chance of success through action indicating an (over)excessive confidence in one's position.  One might to tempted to think along those lines as one follows the slow and painful long term consequences in and for Hong Kong of the so-called Umbrella Movement of several years ago.  "A Hong Kong appeals court jailed three leaders of the Chinese-ruled city's democracy movement for six to eight months on Thursday, dealing a blow to the youth-led push for universal suffrage and prompting accusations of political interference." (Venus Wu and James Pomfret, Critics cry foul as Joshua Wong and other young Hong Kong democracy leaders get jail (REUTERS 17 August 2017)).  That action, perhaps by a government eager to signal to higher authorities, produced a equally significant counter action in the United States, perhaps by officials also eager to signal, but in a very different direction. These signalling actions, in the face of the current internal situations of both states, are likely to bear fruit in unexpected ways. It is to the U.S. counter action that this post focuses: the Statements by Chairs on the “Political Prosecutions” of Umbrella Movement Leaders. See also here and here. 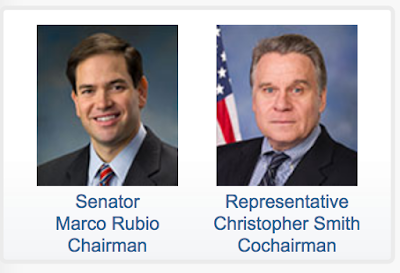 Statements by Chairs on the “Political Prosecutions” of Umbrella Movement Leaders

(Washington DC)—Senator Marco Rubio and Representative Chris Smith, the Chair and Cochair of the Congressional-Executive Commission on China (CECC) respectively, issued the following statements regarding the resentencing of Joshua Wong, Nathan Law, Alex Chow, and 13 other pro-democracy protesters in connection with their involvement with the “Umbrella Movement” demonstrations and a protest against a controversial government development project in 2014.

“Joshua Wong, Nathan Law, Alex Chow, and other Umbrella Movement protesters are pro-democracy champions worthy of admiration, not criminals deserving jail time,” said Senator Rubio. “The political prosecutions and resentencing of these young people is shameful and further evidence that Hong Kong’s cherished autonomy is precipitously eroding. Beijing’s heavy hand is on display for all to see as they attempt to crush the next generation of Hong Kong's pro-democracy movement and undermine the 'one country, two systems' arrangement.  U.S. policy must reflect these realities, which is why I am pressing for swift Senate passage of the Hong Kong Human Rights and Democracy Act.”

“These sentences are another severe blow to Hong Kong’s reputation as a city governed by the rule of law.  Beijing is actively trying to decimate the pro-democracy movement, apparently using Hong Kong’s courts and prosecutors to further its political agenda.  How can one fully trust a legal system that nullifies legitimate Legislative Council elections and resentences Umbrella Movement leaders who have already served their terms? The Hong Kong government may say these are ‘deterrent sentences,’ but to the rest of the world it looks like political prosecutions intended to curtail freedom of expression,”said Representative Smith. “The United States must show unwavering support for freedom and the rule of law, but if the Chinese government will no longer abide by the promises made in the Sino-British Joint Declaration, U.S. policy must adapt and reassess whether Hong Kong warrants special status under U.S. law.”

CECC Statements on Hong Kong:  The CECC has held public hearings and events and the Chairs have issued public statements on political and rule of lawdevelopments in Hong Kong, including the cases of the abducted booksellers.  The Chairs have also expressed concern about the growing influence of the Chinese central government in Hong Kong and infringements on the city’s promised “high degree of autonomy,” including through the disappearance, abduction, and detention in mainland China of five Hong Kong booksellers, and the unprecedented intervention of the Chinese government in Hong Kong’s legal system leading to the disqualification of democratically elected Legislative Council members. Angela Gui, daughter of disappeared Hong Kong bookseller Gui Minhai, testified at a CECC hearing in May 2016. The Chairs have also expressed concern about the Chinese central government’s interference in recent Chief Executive elections and the prosecution of pro-democracy leaders Joshua Wong, Nathan Law, and others associated with the 2014 pro-democracy protests.

CECC Most Recent Statements on Hong Kong:  The Chairs issued statements on the 20th Anniversary of the handover of Hong Kong and on a recent court decisions to remove four democratically elected Legislative Council Members.

Hong Kong Human Rights and Democracy Act:  Senator Rubio introduced the bipartisan Hong Kong Human Rights and Democracy Act  (S. 417) in February 2017 in order to reaffirm the United States’ historical commitment to freedom and democracy in Hong Kong at a time when its autonomy is increasingly under assault. An earlier version of this legislation was introduced in the 114th Congress by Representative Smith in the House of Representatives.