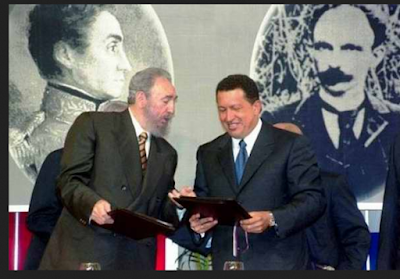 
Back when petroleum was expensive and the hopes and expectations of a socialist road for Latin American (and Caribbean) integration was much more optimistic, I considered the emerging frameworks of a regional trade model that specifically rejected the basic structural foundations of globalized trade and sought to develop a model based on state to state bartering transactions as the driving force of trade, one that privileged political and social objectives over economic (profit) objectives, and one that sought to use economic transactions for quite specific cultural reconstruction ends.  This Alianza Bolivariana para los Pueblos de Nuestra América was going to remake Latin America (e.g., From Colonies to Collective:  ALBA, Latin American Integration, and the Construction of Regional Political Power, Routledge Handbook on Diplomacy and Statecraft (B.J.C. McKercher, ed., London:  Taylor & Francis/Routledge, 2012); Cuba And The Construction Of Alternative Global Trade Systems: ALBA And Free Trade In The Americas, 31(3) University of Pennsylvania Journal of International Law 679-752 (2010) (with Augusto Molina Roman)).


But that model has been fragile and a decade of shocks has substantially weakened all but its ideological structures.  Fidel Castro and Hugo Chavez are dead.  The price of petroleum remains low (relatively speaking). Normalization of U.S.-Cuba relations has changed the economic playing field (potentially). Venezuela's own experiment in soft socialist revolution has turned violent and the nation has been plunged into a period of instability in which many are suffering. And the rest of the ALBA universe has failed to provide substantial overt aid either to ALBA itself or to its key state driver. (though it is impossible to say what sort of covert aid might be provided).

A key driver of ALBA was the Cuba-Venezuela axis.  That axis was founded on a state to state trade deal in which Cuba bartered medical and other social oriented programs (and people) for Venezuelan petroleum. It worked reasonably well for a while.  But that core program now appears to be imperiled. And with the effective end of that basis for cooperation one can only wonder whether what remains of ALBA (except as a rhetorical and political device for evidencing a solidarity of convenience among its members) will also wither away. One gets a sense of this from recent efforts at holding onto the regional and politically focused integration objectives of ALBA (Janier Álamo Zamorano, El sueño integracionista de José Martí, CubaTV (19/05/2017) ("Como nos enseñó Martí, como nos inculcó Fidel, sólo la alianza de todas las fuerzas progresistas permitirá establecer un plan de integración regional basado en la solidaridad, la reciprocidad, la justicia social, la preservación de la cultura y la paz.")).   In ALBA's place, it appears that China's One Belt One Road Initiative now takes center stage as the next generation model of global trade and regional integration on a Markets Marxist model.

A recent excellent report by Marc Frank for Reuters suggests some of the contours of the current state of affairs.  It is well worth reading and follows below:


HAVANA, Aug 15 (Reuters) - Cuban trade with socialist ally Venezuela has fallen 70 percent since 2014 due to the South American oil producer's inability to meet delivery contracts and purchase goods as it struggles with low oil prices and a resulting economic meltdown.

A cash crunch and lower oil supplies from Venezuela have forced the Communist-run Caribbean island to slash imports and reduce the use of fuel and electricity, helping tip its centrally planned economy into recession in 2016 for the first time in nearly a quarter century. (Full Story)

A strategic alliance formed by the two countries' former leaders, Fidel Castro and Hugo Chavez - who have since died - resulted in the Caribbean island importing all its oil from Venezuela in exchange for medical and other professional services, with the oil factored in as merchandise in trade reports.

Under the agreement, Cuba also began exporting pharmaceuticals and other products to Venezuela.

Venezuelan exports to Cuba, almost exclusively oil-related products and reflecting both a 40 percent decline in deliveries and low prices, fell to $1.6 billion last year, compared with $2.8 billion in 2015 and $5.1 billion before the crisis began.

The economy expanded 1.1 percent through June this year, the government reported, but it added that continuing financial difficulties meant austerity measures remained in force and could be broadened.