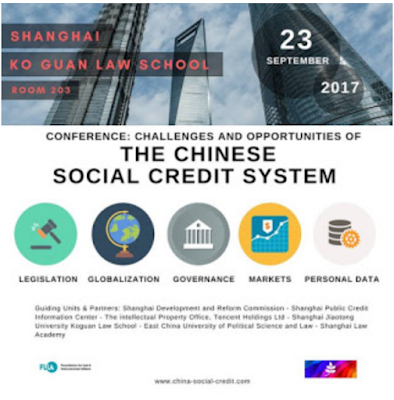 It was my great pleasure and honor to be tasked to provide closing remarks at what turned out to be an exciting and quite extraordinary conference held at the KoGuan Law School Shanghai Jiaotong University (上海交通大学)) 23 Sept. 2017 and organized by Shanghai Jiaotong University; East China University of Political Science and Law; Shanghai Law Academy (Research Center of Banking Law Practice); Tencent Holdings Ltd (Intellectual Property Office);and the Foundation for Law and International Affairs.September 23 at the Shanghai Jiaotong University.  In prior posts I included informaiton about the conference (HERE), and posted my own conference draft ("Measurement, Assessment and Reward: The Challenges of Building Institutionalized Social Credit and Rating Systems in China and in the West").

This post includes the text of my closing remarks: