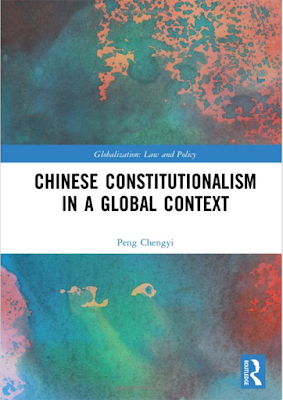 I am delighted to announce a new publication: Peng Chengyi, Chinese Constitutionalism in a Global Context (Routledge, Taylor & Francis Group; Hardback: 9781409454106; pub: 2018-08-06).  The work makes an excellent addition to the Globalization Law and Policy Series. Dr. Peng is an Assistant Research Fellow in the Department of World Political Theory, Institute of World Economics and Politics of the Chinese Academy of Social Sciences.

The book is well worth considering for its insightful approach to the core issues of Chinese constitutionalism within the context of global constitutional discourse. The Table of Contents and book description follows, along with the Preface.


Over the course of the last four decades as China’s ideological realm has been transformed, it has become significantly more complicated. This is well illustrated in the current discourse concerning China’s constitutional future. Among Chinese intellectuals the liberal constitutionalism paradigm is widely accepted. However, more recently, this perspective has been challenged by mainland New Confucians and Sinicized Marxists alike. The former advocate a constitutionalism that is based upon and loyal to the Confucian tradition; while the latter has sought to theorize the current Chinese constitutional order and reclaim its legitimacy. This book presents a discussion of these three approaches, analyzing their respective strengths and weaknesses, and looking to the likely outcome. The study provides a clear picture of the current ideological debates in China, while developing a platform for the three schools and their respective constituencies to engage in dialogue, pluralize the conceptions of constitutionalism in academia, and shed light on the political path of China in the 21st Century. The consequences of this Chinese contribution to the global constitutionalism debate are significant. Notions of the meaning of democratic organization, of the nature of the division of authority between administrative and political organs, of the nature and role of political citizenship, of the construction of rights are all implicated. It is argued that China’s constitutional system, when fully theorized and embedded within the global discourse might serve, as the German Basic Law did in its time, as a model for states seeking an alternative approach to the legitimate construction of state, political structures and institutions.

My interest in the research took shape in part from my participation in two conferences. The first is a conference of devout Confucian practitioners entitled “The Unfolding of Reform and China’s Future - Principles, Values, Motivations of Confucianism, and Contemporary Explorations (gaigekaifang yu zhongguodeqiantu – rujia de yili, jiazhi, dongli, ji dangdai tansuo改革开放与中国前途 -- 儒家的义理，价值，动力及当代探索)” held at Confucius’ hometown - Qufu, Shandong on April 25-6, 2009. Jiang Qing, the leading figure of the so-called “mainland Neo-Confucians,” gave the keynote address at this conference, “Reflections on ‘Confucian Religious Constitutionalism’ (guanyu rujiao xianzheng de sikao关于“儒教宪政”的思考),” in which he shared his latest thoughts on the issue of constitutionalism for China. Even though some “mainland new Confucians” such as Chen Ming immediately expressed doubts about Jiang Qing’s specific constitutional framework, Jiang Qing’s call for and justification of developing a form of constitutionalism based on China’s own cultural tradition did find resonance among members of the audience. The other conference I attended is “The 100th Anniversary of Constitution Setting-up in China and the Future of Chinese Constitutionalism” (zhongguo lixian yibai zhounian ji zhongguo xianzheng de weilai 中国立宪100周年及中国宪政的未來), held at City University of Hong Kong on October 17-18, 2008. At this conference, I discovered Larry C. Backer’s interesting and path-breaking theorization of Chinese constitutional development since Deng Xiaoping’s Reform and Opening Up. In contrast to the mainstream contempt of the Chinese constitution as a sham, Backer develops a legitimate framework for understanding the construction of Chinese constitutionalism. While his theory is not the mainstream, nor supported by the authority of China, it nevertheless provides a new perspective for China’s constitutional development in the future and poses a challenge both to the dominant Western Liberal Constitutionalism and the emerging Traditional Confucian Constitutionalism. As a result of attending these two conferences and consequently discovering these new developments in the discourse concerning China’s constitutional development, I think it would be enlightening and important to sort these three constitutional discourses out, explore their respective strengths and weaknesses, and shed light on the likely outcomes. The result is a two-year research project on this topic as my PhD dissertation focus. The current book at hand is mainly a result of that research, with some updated reflections on the issue in light of the new development since then.

The significance of the research is quite obvious. One century ago, the Chinese intellectuals were facing the same choices of western liberal path, traditional Confucian path and sinicized Marxism path. The ideological chaos was regarded as unprecedented in the long Chinese history. The ideological battle ends up with the victory of the sinicized Marxism in the mainland China. After near four decades of opening up and reform, the ideological realm in China, however, has been jumbled again. History seems to repeat itself in the sense that proposals of western liberal path and traditional Confucian path have been advocated again by some intellectuals. How the ideological game will evolve and end up certainly have significant implications for both China and the world, especially with China’s rapid rise in the West-dominated liberal world order, despite that the Western liberal order itself is under significant transformations due to the challenge of rising populism. This book will be a mapping of the ideological realm in China as well as a search of the answer to the billion-dollar question about China’s future path and its implications. Thus anyone concerned about China’s future and its impact on the world should have a careful reading of this book. In memory of the completion of it, I want to make a number of acknowledgements here. First of all, I want to thank my parents who have not only given me the physical body but also injected in me a clairvoyant soul. Their humbleness, simplicity, hard-working as well as unconditional love, typical to all those living at the bottom layer of the Chinese society, have always touched me to tears and inspired me with inexhaustible powers to pursue my dreams. Secondly, I want to thank the Project of Hope in China, which has supported over 2.5 million drop-out children to return to their beloved schools. Without the supports of the Project of the Hope, which include the sponsorship of the Peipei Foreign Language School (培培外国语学校) in Zhejiang Province in China, as well as the financial support of Gao Qi (高崎) from Shanghai, I would not have had the opportunities to study in China’s first “Stars of Hope” class in the beautiful harbor-city Wenzhou and receive my tertiary education in the beautiful Canada and the modern Hong Kong. Without all these supports, I would certainly not have arrived at my current stage today. Thirdly, I want to thank Prof. Philip Ivanhoe, for his guidance in writing the dissertation each step along the way and his meticulous editing of a previous version as well as careful comments on various arguments of the book. I would also like to thank Prof. Larry Backer for his consistent support as well as encouragement for turing the dissertation into a book, without which the book would have not been possible at the current stage. I am also thankful to Dr. Sungmoon Kim, Prof. Julia Tao and Prof. Hon-mun Chan for their supports as well as feedback on various sections of the work. Despite the learnings and inputs from them, I need to acknowledge that any errors in the book are my own and I alone am responsible for the contents of the work.