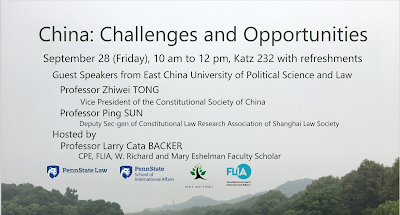 On 28 September 2018, the event, China: Challenges and Opportunities: A Conversation with Penn State and East China University of Political Science and Law Faculty (中国：挑战与机遇:  宾州州立大学与华东政法大学学者对话) was held at Penn State University.  My thanks to its sponsors, the Coalition for Peace and Ethics (CPE), the Foundation for Law and International Affairs (FLIA), the School of International Affairs and the Law School at Penn State.

The Concept Note can be read HERE. The Event centered on developments in jurisprudential theories that have application not just for the study of Chinese developments, but which also have substantial application for other systems.

This post includes proceedings of the Event and was prepared with Flora Sapio (Uni Naples and CPE). 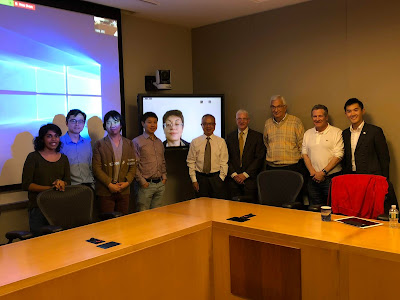 The Event was opened by Scott Gartner, the Director of Penn State's School of International Affairs.   He welcomed the participants. His remarked on the close connection between Penn State's SIA and Chinese institutions, and nicely outlined the challenges that face China in its external relations.