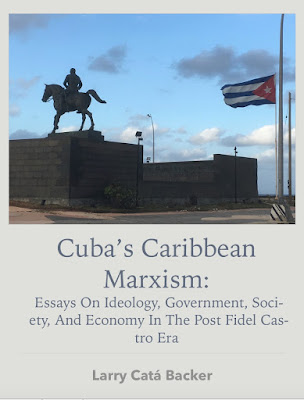 I wanted to take advantage of the end of the celebration of National Hispanic Heritage Month to provide an advance announcement of the forthcoming publication of my book: Cuba’s Caribbean Marxism:  Essays on Ideology, Government, Society, and Economy in the Post Fidel Castro Era (Little Sir Press, forthcoming 2018; ISBN 978-1-949943-00-9(pbk); 978-1-949943-01-6 (ebk)).

The book will be available in electronic versions first in a few weeks with the paperback edition to follow shortly thereafter.  Eventually an audio version will be available as well as the ability to purchase chapters at a very modest price.

The book will be published by Little Sir Press, and the hope is to make the book available as inexpensively as possible. I have been concerned for a while about the way that academic work has effectively been made unavailable to most people--especially those with limited means, and with no means of accessing public libraries.  Knowledge has become an elite affair, not because it is intellectually inaccessible, but because it has been made societally inaccessible my making it harder to access, and too expensive for most. This is especially of concern for me for its effects on traditionally marginalized communities--including the many communities that together make up the U.S. Hispanic community.

A short abstract follows.  In later posts will will make available more detailed descriptions of the work, and of each of the chapters.  For those of you with an interest in ideology, or in the quite dynamic changes to Marxism-Leninism as a political-economic and constitutional system, or for those interested in Cuba or Latin America, there may be something of interest for you here.

This book is about ideology in the contemporary world. Ideology serves as the foundation that makes it possible for a political community to develop principles through which it can organize itself by reference to a core baseline against which to understand the world around. This book is also more particularly about Cuba. Cuba serves as an ongoing living experiment in the possibilities of molding individuals and the society along the lines suggested by application of a quite explicit set of grounding principles that form an ideology. Fidelity to ideology within a national context makes it possible to create and operate government, society, politics, and economics that are “good” and against which reform can be assessed and applied. The essays that comprise the twelve chapters of this book are drawn from a decade and more of thinking about Cuban ideology and its application in the wake of the passing of Fidel Castro, the charismatic founder of what these essays identify as Caribbean Marxism. The first 7 chapters develop the conceptual framework for understanding Caribbean Marxism as a theory and the challenges that theory poses in the face of reform necessitated by changes in historical condition. Chapters 8 through 12 focus on the concrete manifestation of these abstract structures in several key areas–economic organization of the private sector, trade and investment, and lastly the project of constitutional reform.
Posted by Larry Catá Backer at 10/15/2018 11:28:00 PM