The Congressional-Executive Commission on China (CECC): Release of 2018 Annual Report; Making a Case for 'Crimes Against Humanity' Against China, and Text of Proposed “Xinjiang Uyghur Human Rights Act of 2018”. 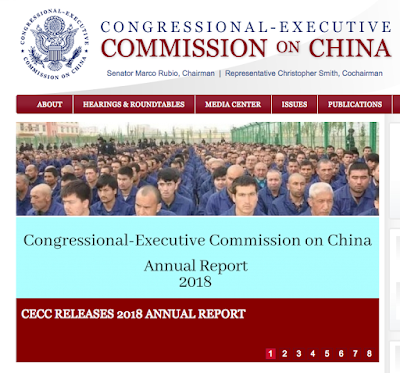 This month the CECC has released its Congressional-Executive Commission on China Annual Report 2018 (The Press Release HERE and following below). The 2018 Annual Report may be accessed HERE (pdf).

The CECC has also intensified its attention to a critical consideration of Chinese policies toward its autonomous regions, and its treatment of religion (in general) and religious minorities (specifically). CECC leaders coordinated the announcement of the release of the 2018 Report with three other actions that are particularly noteworthy:


1. The Chairs released a letter asking the FBI to report on how it addresses “unacceptable” intimidation and threats targeting Chinese, Uyghur, and Tibetan diaspora communities living in the United States (Letter to Federal Bureau of Investigation (FBI) Director Christopher Wray).

3. The Chairs released the text of a Xinjiang Uyghur Human Rights Act of 2018 (the text of which follows below).

The material is rich with possibility. Ironically, some of the measures advocated would bring the United States much closer to adopting (and hardening) the mechanisms of the United Nations Guiding Principles for Business and Human Rights in both its 1st Pillar (State Duty) and 2nd Pillar (Corporate Responsibility) aspects. But of course it is meant to do more than that. It would align the work of the United States to that of the UN High Commissioner for Human Rights Special Rapporteurs even as the United States formally pulls out of the Human Rights Council. More importantly, it would further expand the use of the "targeted action mechanisms" represented by the Global Magnitsky Act (see here) now extended in a way that would make the United States the global protector of a neutrality based approach to human rights that reflects the evolving American jurisprudence of its Constitution's protection of the "Free Exercise" of religion and internationalizes those jurisprudential approaches, standards and principles.

One last point:While the human rights orientation of the CECC interventions would appear to run counter to Administration policies and preferences, it would be a mistake to think that there is policy dissonance in fact. In the past the CECC has tended to chart a course that was autonomous of the policies and objectives of Presidential Administrations. Yet now there appears to be a measure of coordination between CECC and the Trump Administration that one might not have noticed before. It may be necessary to read this intervention by the CECC as (in part) continuing the arc of the agenda that CECC has been forging autonomously for several years) but also that this arc has now been harassed int he service of the current efforts to strike a new grand bargain with China.    To that end, these interventions ought to be read against both Vice President Pence's speech at the Hudson Institute (Underlining the Obvious: Remarks by Vice President Pence on the Administration’s Policy Toward China),  and President Trump's U.N. speech ("America First," "Belt and Road," "Mutually Advantageous Cooperation" and the Rise of the Global South: Preliminary Thoughts on Remarks by President Trump to the 73rd Session of the United Nations General Assembly (25 September 2018)).


More importantly, the focus on Muslim majority populations in China may also provide an important opportunity for the Administration to refine its domestic position with respect to the jurisprudential structures within which religion will be privileged int he United States by holding up this policy-action mirror to China. It would likely be a mistake to see in the CECC only a focus outward.

The CECC Press Release, Letters to the FBI and the International Olympic Committee and the text of the Xinjiang Uyghur Human Rights Act of 2018 follow.

The 2018 Annual Report provides detailed analysis on human rights conditions and rule of law developments in China, and offers recommendations on ways to integrate these issues into U.S.-China relations.

Among the major trends that the Report highlights are the unprecedented repression of ethnic minorities in the Xinjiang Uyghur Autonomous Region (XUAR); a dramatic increase in Communist Party Control over government, society, religion, and business; and the increasing use of technology and surveillance as a tool of repression.  The Report also highlights the elevated role of the United Front Work Department, a Party institution used to influence and neutralize possible challenges to its ideological and policy agenda, and the impact this has had on religious freedom and ethnic minority communities.

At the press conference releasing the report, the Chairs recognized members of the Uyghur diaspora community in attendance who had been personally and directly impacted by the current crackdown in the XUAR.

“The Commission’s 2018 report documents gross violations of human rights in ethnic  minority regions, religious freedom violations, harassment of rights defenders and lawyers, suppression of free speech, onerous restrictions on civil society and more—the markings of a fundamentally authoritarian state,” said Senator Rubio. “The crackdown in Xinjiang resulting in the internment of a million or more Uyghur and other Muslims may constitute crimes against humanity.  The Communist Party has dramatically increased its control over government, society and business and is ruthlessly employing technology to further its aims.  As American policymakers increasingly reexamine the misguided assumptions that have informed U.S.-China relations, we must be clear-eyed about the global implications of China’s domestic repression.”

“In the continued quest to retain power, the Chinese government and Communist Party has sought to coercively control civil society, ethnic identity, and religious belief and to decimate the ranks of human rights lawyers, pro-democracy advocates in Hong Kong and labor rights advocates in China,” said Representative Smith. “Even by the Chinese Communist Party’s low standards, this year has been audaciously repressive. This report shines a light on the Chinese government’s failures to abide by universal standards; shines a light on the cases of tortured and abused political prisoners; shines a light on a million Uyghurs detained in Orwellian “political reeducation” camp and on China’s still coercive population control policies.  It should be required reading for anyone interested in reevaluating U.S.-China policy.”
In conjunction with the 2018 Annual Report’s publication, the Chairs also announced new joint initiatives, including:

Letter to Federal Bureau of Investigation (FBI) Director Christopher Wray: The Chairs released a letter asking the FBI to report on how it addresses “unacceptable” intimidation and threats targeting Chinese, Uyghur, and Tibetan diaspora communities living in the United States.

Letter to Thomas Bach, International Olympic Committee (IOC) President, on 2022 Beijing Winter Olympics: The Chairs released a letter to IOC President Thomas Bach urging him “to take steps to reassign” the 2022 Winter Olympic Games in Beijing given “credible reports of the mass, arbitrary internment of one million or more Uyghurs and other predominately Muslim ethnic minorities” and other gross violations of universally recognized rights, “which may constitute crimes against humanity.”

Nomination of Uyghur scholar Ilham Tohti for 2019 Nobel Peace Prize: The Chairs announced their intention to nominate Uyghur scholar Ilham Tohti for the 2019 Nobel Peace Prize. Tohti, who is currently serving a life sentence on charges of “separatism,” founded the website Uyghur Online, which sought to promote dialogue, peace, and understanding between Han Chinese and Uyghurs.

Both Chairs commend the capable and professional work of the CECC’s research staff in producing the Commission’s 17th Annual Report. The full report can be accessed on the CECC’s website. 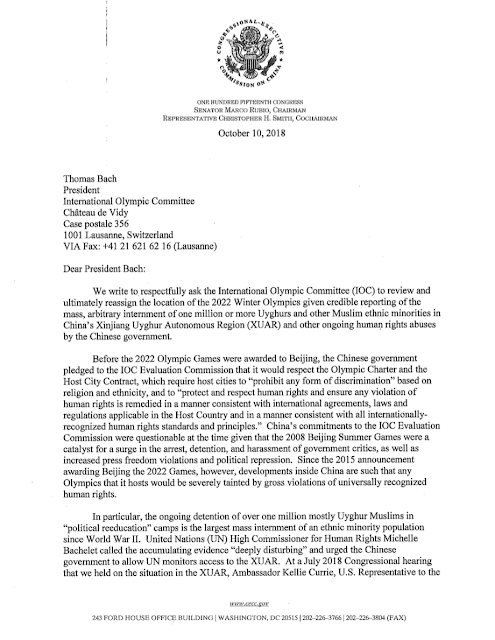 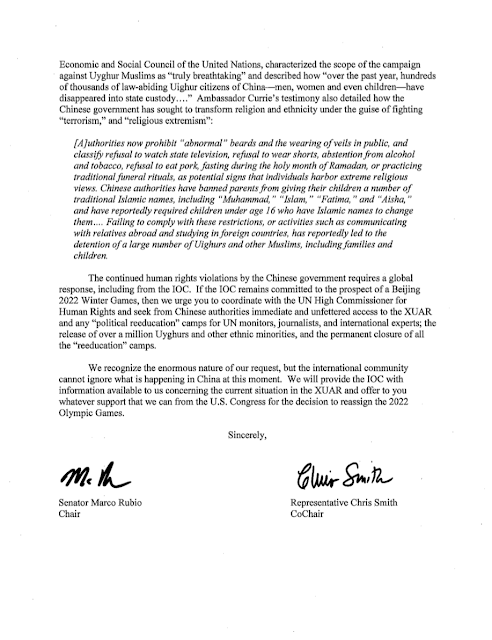 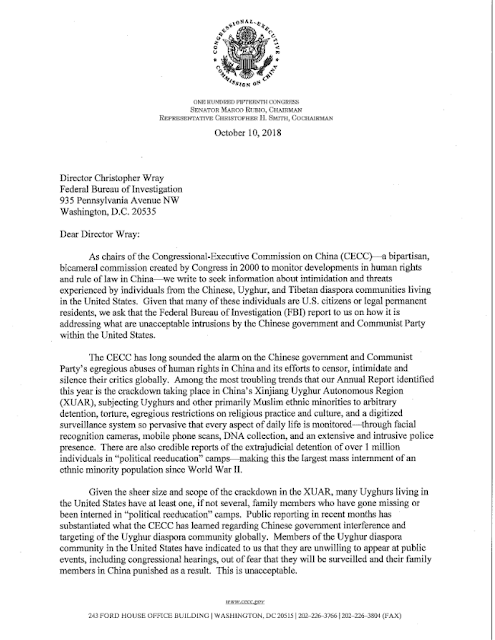 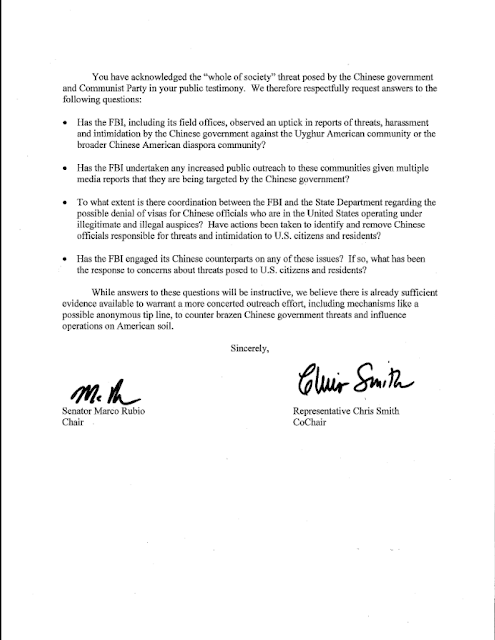