How Much is Your Body Shape Data Worth? AI and the Business of Data Harvesting to Understand Body Shape Diversity 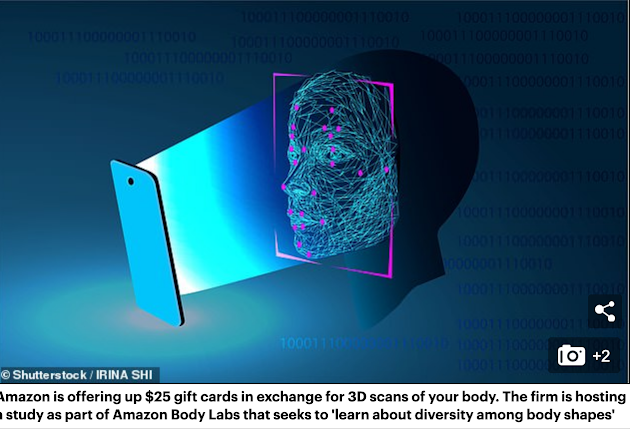 In a prior post (OECD Principles on Artificial Intelligence and Some Brief Reflections) I offered some brief reflections on the continuing move toward the management of Artificial Intelligence (AI) now broadly construed to mean the production chain for regulation that starts with data harvesting, proceeds through values based analytics and consequence based algorithms, and makes it possible for a machine to make a decision on the basis of that process.

I noted that the obsession with the leading role of the state left open a large void within which the private economic powers might be able to develop their own codes of ethics and operating premises with respect to the entire production chain of data driven governance ("The Algorithmic Governance Contract and the (Internal) law of Production Chains"). More importantly, perhaps, and especially within the governance fields of large transnational economic institutions, the focus on values based AI left largely untouched the connection between these values as AI as property. And not just AI as property--but the value as property of the key value enhancing elements of the AI production chain--data, proprietary forms of analytics; proprietary formulations of algorithms, and the AI decision making machine (hardware and software plus coding) itself.

Crucially, data collection and analysis also provides firms with feedback mechanisms that allow them to iteratively hone their extraction processes. By constantly surveilling us, for example, Amazon gets better at recommending us products, Facebook at monopolizing our attention, and Google at analyzing our preferences, desires, and fears. Sam Adler-Bell and Michelle Miller, “The Datafication of Employment” The Century Foundation (12-2018)

All of this is now quite clearly on display in a recent report that Amazon has now figured out the value of a very specific data set--a 3-D data scan of their bodies.  In return for a $25 gift certificate, "Participants who set up a 30-minute appointment will be asked to take a survey and agree to have 3D scans, photos and videos taken of them." (Amazon is giving away $25 gift cards to anyone who agrees to let the firm 3D scan their entire body, Daily Mail 24 May 2019). Here one encounters not the face of emerging markets in data extraction, but rather in the economics of data harvesting in which data providers stand in the same position as those at the very bottom of global production. Here one encounters the part of AI that focuses on property and with respect to which the pieties of ethical stewardship appear to have little to say in their principles.

But interesting as well is the connection between the AI production chain, here, nicely exposed at its data sources, and the regulatory potential of data extraction of this sort. Here one sees one way in which enterprises may interpret the values based stewardship of data in AI systems, but in a peculiar way. The key value here is diversity--that is to get a better sense of the diversity of human body shapes. The use of the word "diversity," now heavily values based and politically (as well as socially) sensitive. It is too early to tell but one ought to be wary of a data harvestor's facility in using invocation of popular values as a cover for exploitative extraction behaviors the full extent of which remains unclear. And, indeed, data can be used by Amazon, of course, to enhance its own business model.  But it can be sold--once processed, both as raw data and as analytic packages to others --including the state--for everything from eugenics programs (health and welfare programs, etc), to insurance and actuary enterprises, to businesses that dress consumers.  In Amazon's case, the possibility of synergy--using the data to help another Amazon product that uses AI to manage people's choices in the purchase of consumer goods. And that is only in the short term.

Amazon is giving away $25 gift cards to anyone who agrees to let the firm 3D scan their entire body
Participants will agree to have 3D scans, photos and videos taken of their bodies
Scans are taken while people are wearing everyday and 'form-fitting' clothes
Amazon says the study is being conducted to 'learn about diversity' in bodies
Many believe the data could be used for Amazon's virtual try-on products

By Annie Palmer For Dailymail.com

Amazon is offering up $25 gift cards in exchange for 3D scans of your body.

The internet giant is currently conducting a study at its New York office as part of Amazon Body Labs that seeks to 'learn about diversity among body shapes,' according to a listing, which was first spotted by Mashable.

Participants who set up a 30-minute appointment will be asked to take a survey and agree to have 3D scans, photos and videos taken of them.

The move comes as Amazon has faced privacy concerns around its collection of data from Echo devices, as well as the deployment of its controversial facial recognition software.

Scans will be taken in both their 'everyday clothing,' as well as 'form-fitting' garments, which for women might include a bikini or form-fitting shorts and a sports bra, the listing states.

Participants' height and weight measurements will also be taken during each session.

Amazon said any data collected from participants will 'be used exclusively for internal product research.'

The firm added that it won't use the data for marketing purposes, however, it noted that any responses are subject to Amazon's Privacy Notice, which details what kinds of data it collects and how it is managed.

After supplying a 3D scan of their body, participants are then given a $25 gift card. 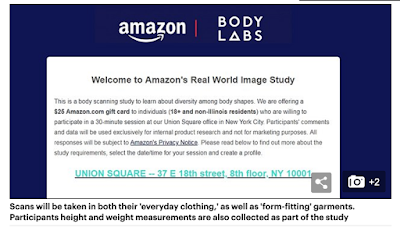 Body Labs previously provided 3D body models for shopping and video games, however, their technology has also been used in law enforcement, according to Mashable.

Amazon has also hosted other body-scan studies in the past.

Last year, the firm was looking for participants to allow the firm to track changes in their bodies over a 20-week period, according to the Wall Street Journal.

It's not completely clear what Amazon intends to do with the data it collects from this new study, but many have speculated it could be harnessed to improve Amazon's Echo Look.

The Echo Look is a 'style assistant' camera that was first launched by the firm last June. 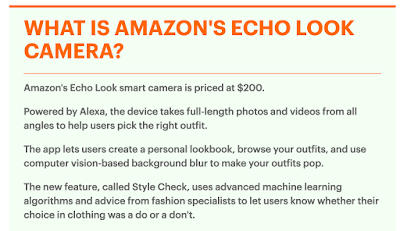 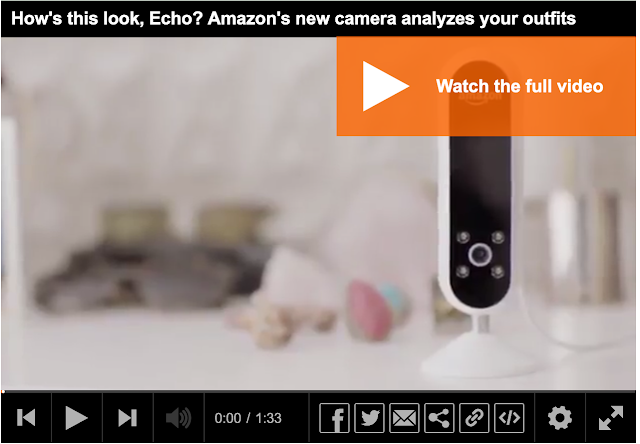