Just Posted--PPTs of Presentation: "The Algorithmic Governance Contract and the (Internal) law of Production Chains" for REIMAGINING CONTRACT IN A WORLD OF GLOBAL VALUE CHAINS Sciences Po, Paris, France, 9-10 May 2019 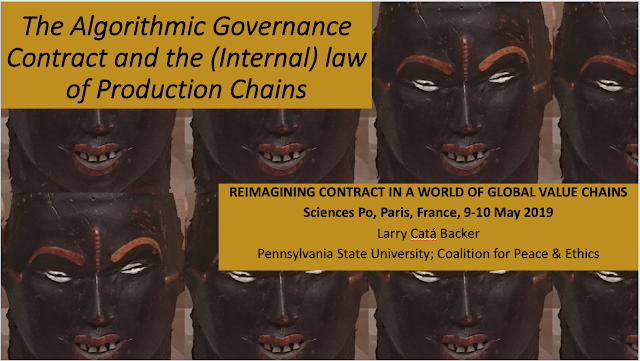 I am delighted to make available the PPTs of the presentation I will make at the upcoming event--Reimagining Contract in a World of Global Value Chains -- to be held at Science Po, Paris, 9-10 May, 2019. My thanks to the organizers, Klaas Hendrik Eller/Jaakko Salminen, along with the Global Value Chain group @ Sciences Po Law School (SAB Global Value Chains).


The presentation, entitled The Algorithmic Governance Contract and the (Internal) law of Production Chains, considers the challenges of private governance under emerging structures of data driven governance.  This trend has not shifted the long term shift of regulatory power from public to private institutions, and away from the state to something that for lack of a better term might be understood as the transnational (production chains, regional groupings, Belt and Road Initiative, etc.). Rather it appears to change the quality and form of the governance that is shifting as well as the forms through which states themselves might be tempted to govern. As well it poses a fundamental shift in both accountability structures and the hermeneutics of regulation from human to machine language that remains unexplored. For policymakers, lawyers, enterprises, and civil society organs, this change raises serious question about the forms and quality of governance, its manifestation, and the places where it can be practices, monitored and managed.

The PPTs follow along with a brief abstract of the presentation. The Conference theme also follows.


The Algorithmic Governance Contract and the (Internal) law of Production Chains.

Abstract: The development of notions of governance contracts in its current form is now nearly a generation old. These notions touch on the expression of governance within production chains overseen by an apex enterprise or controlling group and articulated through the use of the form of contract with the effect of legislation (or at least of administrative regulation). It gives expression to and realizes a number of regulatory trajectories that have been taking clearer shape over the last two decades. These include the migration of the premise of territory from a physical to an abstract space (e.g., the “multi-national enterprise, or the production chain as territory). It also includes the acceleration of second wave privatization (first wave privatization involves the privatization of units of economic production (firms)) understood as the privatization of regulation. This trend, in turn, can be understood as consisting of two distinct methodologies. The first encompasses what has come to be understood as regulatory governance, a delegation of regulatory authority through markets to economic units controlling production (including services). The second encompasses what had come to be understood as global administrative law, that is the bureaucratization of the economic enterprise and its re-constitution as a privatized administrative office subject to the ideologies and sensibilities of the 20th century administrative state (along with its constitutional (Recht- and Sozial- staats) premises).

Yet even as these trends have become more visible in the rise of theories and cultures of privatized and hybrid regulatory projects within global production chains, the administrative side of regulatory programs have received relatively less attention. Even as enterprises refine their legislative capacities, they have also begun to realize the potential that data and data driven analytics offers for administration of regulatory projects. In Marxist Leninist systems, these forms of administrative expression have become deeply embedded in policy—especially in China after 2014 and the announcement of the social credit project as fundamental state policy. In the West, these trajectories have been largely privatized and received with suspicion by political and academic elites. They are coming anyway. But they take two forms. The first is the use of data and data driven analytics as a tool for the enforcement of regulatory measures and their objects, as well as to automate response (reward or punishment) eliminating a large measure of administration discretion. The second, and potentially more transformative, use is in substituting data and data driven analytics for regulation itself. The result would be to transform the regulatory contract from an instrument of legislation, to a framework instrument, the precise content of which, along with its enforcement, would be operationalized elsewhere. That elsewhere, however, would fuse the legislative and administrative elements fo governance in new and little understood ways.

This presentation explores the development of regulatory contracts in the shadow of data and data driven analytics. It first examines briefly the current state of the art of regulatory contracts, focusing on recent cases in which the regulatory element of these instruments are being leveraged into fields of legal liability within the domestic legal orders of states. It then examines the emerging character of uses of data, and data driven analytics in the management of conduct within production chains. lt ends by suggesting potential emerging frameworks of private governance in the West and public governance in Marxist Leninist States through the device of governance contracts within and beyond markets.