Blacklists and Social Credit Regimes in China: Paper and PowerPoints 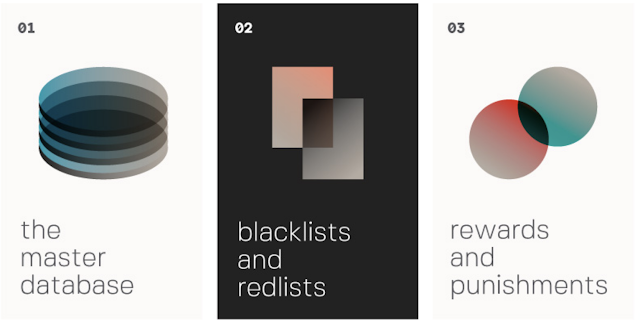 Black(white)(red)lists have been an instrument of regulatory management for a long time.

The city was filled with murder and there was no counting the executions or setting a limit on them. . . .Finally one of the younger men, Gaius Metellus, ventured to ask Sulla in the senate at what point this terrible state of affairs was to end. . . . “We are not asking you,” he said, “to pardon those whom you have decided to kill; all we ask is that you should free from suspense those whom you have decided not to kill.” Sulla replied that he was not sure  yet whom he would spare, and Metellus at once said: “Then let us know whom you intend to punish.” . . . Then immediately, and without consulting any magistrate, Sulla published a list of eighty men to be condemned. (Plutarch, The Fall of the Roman Republic, Sulla, ¶ 31).

In the West it has long been common for leaders of states (or those whose leadership guides the state) to establish proscription lists.  * * * Chinese history is also full of lists created by officials and others. They are all were used to similar effect—to identify individuals or societies for the purpose of reward or punishment.  That was accomplished either by listing or ranking; the former where the list itself contained the restriction or privilege; the latter where the list permitted others to use rank to determine consequence. * * *  Lists, however, in themselves are merely passive conclusions; they acquire potency only when circulated, and, in the wake of circulation, when they produce a timely social, political and economic consequences undertaken through and supported by the state. These consequences, themselves, must be keyed to societal values that resonate in ways that create incentives to support or condemn particular practices or behaviors that served as the basis for placement on the list. In other words, there must be a connection between  that facts that produce assessments on which list are created, and the consequences, related to that data for placement (or non-placement) on that list.

The value of lists, then, lies in their utility for managing effects. * * * But while a single list may be useful means of actualizing a score, super-scoring becomes possible only by the development and coordination of a larger aggregation of lists, each potent within its own narrow field, but together capable of producing a coherent means of managing any aspect of societal expression (and its underlying beliefs). It is in that context that it is possible to think about lists, and a developing list universe system, at the center of China’s Social Credit (CSC) system.  This essay considers the role of lists in the construction of CSC conceived as a vast super-scoring system that effectively displaces law and administrative regulation as the engine for ordering society through government. The essay first very briefly describes the CSC system.  It then considers two questions: (1) how does one build a super scoring system through the structures of CSC?; and (2) what role do lists play within that framework. It ends with a short consideration of what may be the principle challenges for political and general education that now arise in the context of these digital regulatory measures.