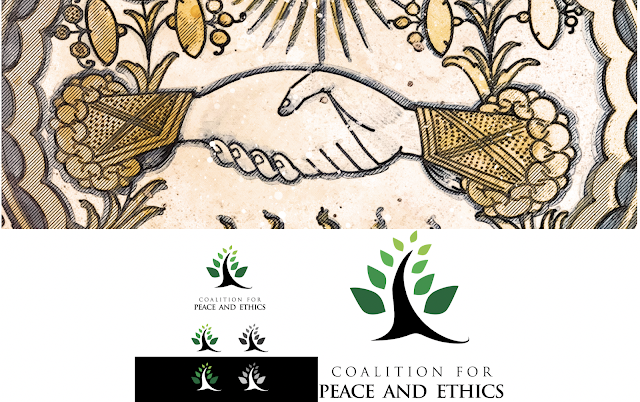 A well orchestrated 5th session will take place 14-18 Oct 2019. For that event a number of carefully curated materials have been made available for those with the resources and capacity to access them on the U.N. website. See the revised Draft here; Side events programme; Revised Draft programme of work; General information. In addition, the OEIWG was gracious enough to have organized an informal consultation on the updated draft programme of work for the fifth session, 9 October 2019 Room XXIV at Palais des Nations.

The Coalition for Peace and Ethics has released for general distribution the following statement on the start of the 5th Session of the IGWG: (en español aqui)

The Coalition for Peace and Ethics salutes IGWG and those at the center of its work.

We acknowledge the work of their allies.

We appreciate the tremendous work and good faith of all of the participants and respect the  objectives toward which these efforts are directed.

The Coalition for Peace and Ethics shares with those influence drivers many of the fundamental principles that have directed their efforts and encourage them to continue a strong adherence to their further development. 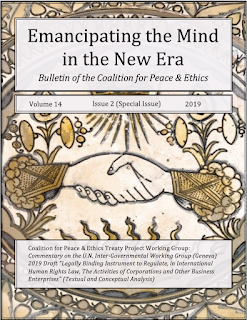 We further regret that the process of development of the draft has tended to marginalize both the sustained engagement of the objects of the Treaty's purpose, and made it difficult for non-governmental organizations without resources and capacity to effectively participate in the process of the elaboration of a draft Treaty, except, as audience and to some extent, as "focus group."

The Coalition for Peace and Ethics regrets that the process, for reasons that are inherent in the politics of business and human rights after the endorsement of the U.N. Guiding Principles for Business and Human Rights, has produced the sort of well managed factionalism through which both the "Zero Draft" and the current Draft Legally Binding Instrument" were elaborated.

The Coalition for Peace and Ethics welcomes the openness of the IGWG to receive comments on its work and further on its progress toward producing a draft Treaty that will actually be circulated as such.

Lastly, the Coalition for Peace and Ethics agrees international law might contribute, in some specific ways, to evolution of norms and  standards against which the human rights and sustainability consequences of the economic activities of states as well as of business enterprises might be assessed and managed.

On the basis thereof, the Coalition for Peace and Ethics:

1. Cautions the IGWG and its allies of the dangers of proceeding  with the development of the Draft and its future incarnations without deep and effective consultation with the large and varied communities of actors that have neither the resources nor the capacity nor that status to sit at the principal table where decisions about the Treaty drafting are being made.  To the extent that the Treaty project is viewed as another elite project, it runs the danger of losing both legitimacy and authority among the classes of individuals for the protection of which the work of the IGWG is directed.
2. Cautions the IGWG and its allies against the temptation of drafting the Legally Binding Instrument in a manner that is accessible to rights holders.  As drafted the Treaty may appear to some to be little more than a means through which control over the protection, mitigation, and remediation of rights is effectively delegated to organizations (including states, enterprises, and non governmental organizations) who would act for rights holders.  As written, the language and the structures are complex, remote, and incapable of easy understanding by those most in need of its protections.

3. Regrets that the Draft Legally Binding Instrument  continues what we believe to be its (no doubt popular) position with respect to the construction of a class of rights holders--"victims"--through which the obligation of the Treaty will be operationalized.

4. Cautions against the decisions, written into various key potions of the Draft, to abandon effective efforts toward the construction of coherent and coordinated standards.  The result will only increase the principal use of the any resulting Treaty as a play book for judiciary and law shopping among adhering states in ways that will make the obligations written into the Treaty even more remote from rights holders. The Treaty ought not to be constructed as a means of empowering lawyers; nor should it be framed as a means through which lawyers from developing states can effectively strip the courts of developing states of effective control of the legal development of rights within their domestic legal orders.  Neither of these dangers is adequately addressed in the draft Treaty.

5. Welcomes the efforts to introduce a legal regulation of human rights due diligence within the Treaty framework.  But it cautions against the porous nature of the current approach that will produce fracture rather than coherence that will in its effects undo the efforts to unify the practice of human rights due diligence among enterprises and states irrespective of location and without regard to national deviations in the normative basis of such due diligence.

6. Encourages the IGWG to take its own suggestion and reconsider the basis of the rights afforded to individuals away from a statutory basis and toward a harm basis.  It is to be regreted that the IGWG has again sought to revisit the approach of legal liability abandoned after 2005 and the Norms project.  Whatever its value at the time, the international community had spoken to some extent, and the plausibility of constructing a legally viable framework on the basis of standards of dubious legality and even less wide acceptance as law in many jurisdictions will tend to serve as a distraction at best, and a means of unsuccessfully ending this project at worst.

7. Suggests that, as written, the Draft Legally Binding Instrument  appears better suited as a framework instrument than as a legally binding instrument that is ready for transposition, as such, into the legal orders of adhering states.

8. Regrets the continued efforts to build into the Treaty framework some sort of distinction between transnational and other enterprises.  The effort suggests, no doubt without basis, efforts to sneak items of national advantage into a treaty that is meant to celebrate multi-lateral solidarity.  That alone is enough cause for regret.  The extent to which such differences no longer matter, the continued reference to transnational versus local enterprises creates substantial areas of ambiguity that will not help the Treaty project achieve its aims.

9. Encourages the IGWG with its future work on transforming this draft into a document that is more specific, more accessible, less elite driven, and more compatible with a view that all actors in the process of embedding human rights in economic activity are entitled to respect and inclusion in the process of building a treaty framework for its important goals.

10. Advises the IGWG to more vigorously center issues of sustainability, including issues of environmental, bio-diversity and climate change within the broader framework of human rights enhancing obligations imposed on both business and states. The failure to acknowledge and embed the human rights aspects of sustainability may, in effect, constitute a human rights wrong. The failure to address this may significantly undermine the value and authority of any Treaty that emerges from this process.

11. Warns the IGWG that the failure to consider the role and effectiveness of data driven governance standard setting and implementation modalities may seriously impede the operationalization of the Treaty and its framework. Data driven governance, quantitative ratings based social credit regimes ought to play an important part in the construction of a business and human rights legal framework.  It is essential for accountability not just with respect to enterprises but also with respect to states on which the primary legal obligation for respect of law and its enforcement continues to rest.

12. Regrets that the continued differentiation between "transnational" and other enterprises continues to find its way into critical portions of the Treaty draft.  CPE encourages the IGWG to consider elimination of this unnecessary distinction, if only to avoid the intimation that the Treaty is made to favor the national interests and economic protectionism of some states at the expense of others.

The Coalition for Peace and Ethics applauds the work of the many actors who have helped bring this project to this stage of development.  It encourages a broader engagement, especially among stakeholders who generally tend to be ignored by the powerful actors who have tended to treat this project as slightly more proprietary than is necessary.  Leadership and guidance is not ownership, and respect for that distinction may spell  the difference between a treaty that is widely accepted and one that is widely ignored.

With respect to these observations and comments, and for the purpose of aiding in the consideration of issues that might be usefully considered in moving the Treaty project forward, the Coalition has offered to the IGWG its Treaty Project Working Group's Commentary on the U.N. Inter-Governmental Working Group (Geneva) 2019 Draft 'Legally Binding Instrument to Regulate, in International Human Rights Law, The Activities of Corporations and Other Business Enterprises' (Textual and Conceptual Analysis).  Full Print Version HERE: 14-2_Treaty_Special_Issue_2019; online (ISSN 2689-0291) and in print format for download (ISSN 2689-0283 (print)). Either may be accessed by clicking THIS LINK HERE.