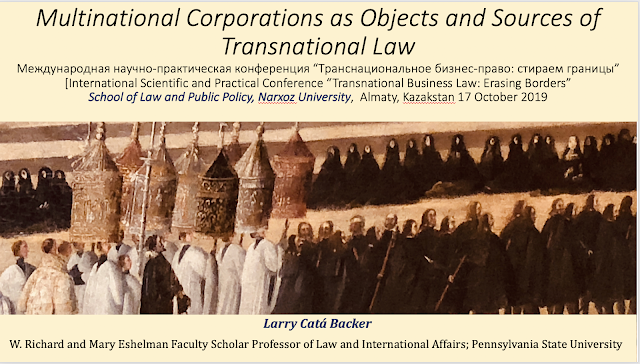 Transnational theory is comfortable speaking to polycentricity in regulation. It speaks to the possibility of coherence in functionally differentiated spheres in which multiple layers of regulation from multiple rule producers’ functions simultaneously on a stable object of regulation. The focus has usually been on the state as the great space within which or through which such polycentric governance can emerge and operate. But the MNE itself has emerged as a great polycentric space within which regulation is possible. Its aggregate parts engage with and are embedded within the polycentric governable spaces regulation. That internal regulatory space changes focus and character as one moves from a conceptualization of the multinational corporation as object, to the MNE as an aggregation of linkages (those linkages serves as the space within with regulation is possible). It acquires an even more distinct character when the MNE as object or linkages is subsumed within the regulatory space of global production chains (within which regulation is also possible). In each case, the MNE is partially and simultaneously bound by layers of regulatory governance; state and private law, the effectiveness of which is limited to that portion of the “idea” of the MNE to which it attaches. Understanding its form and structure—and its use—may drive truly transformative change. Framing the analytical approaches to multi-polycentricity—in source and object of law—is then a necessary first step in analysis.

For those interested, I have posted the PowerPoints of my presentation, Multinational Corporations as Objects and Sources of Transnational Law, delivered at the International Scientific and Practical Conference “Transnational Business Law: Erasing Borders” [Международная научно-практическая конференция “Транснациональное бизнес-право: стираем границы” ]hosted by the School of Law and Public Policy, Narxoz University, Almaty, Kazakhstan, 17 October 2019.

The article from which the presentation was drawn may be accessed here (pre-publication draft).
Posted by Larry Catá Backer at 10/18/2019 02:01:00 AM