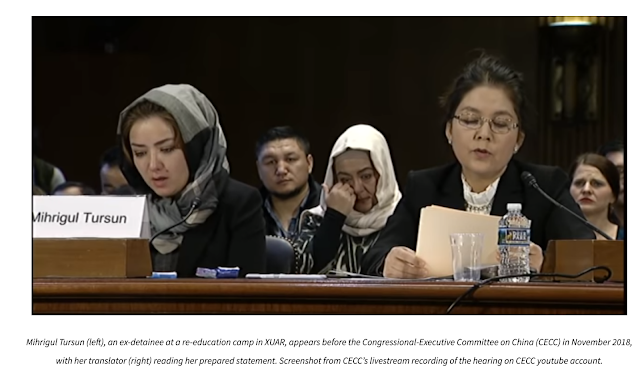 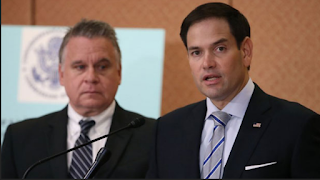 The CECC has made its position clear with respect to the situation in Xinjiang and has been an important force in  influencing opinion in the US. For a listing of its engagements see HERE. On 10 October 2019  CECC distributed a "Xinjiang: Chairs’ Statement on State and Commerce Department Actions."

U.S. Representative James McGovern (D-MA) and U.S. Senator Marco Rubio (R-FL), the Chair and Cochair, respectively, of the bipartisan and bicameral Congressional-Executive Commission on China (CECC), issued a joint statement following the Department of Commerce’s October 7th decision to place 28 Chinese governmental and commercial organizations on the Department’s “Entity List” and the State Department’s October 8th announcement of visa restrictions against Chinese officials responsible for the “detention or abuse of Uyghurs, Kazakhs, and other members of Muslim minority groups” in the Xinjiang Uyghur Autonomous Region (XUAR). The Commerce Department action constricts the export of items subject to the Export Administration Regulations (EAR), including U.S. made software and microchips, to entities complicit in the mass arbitrary detention and high-technology surveillance in the XUAR. The CECC has long pressed both the State and Commerce Departments to sanction Chinese officials and restrict U.S. exports to state security entities and to businesses profiting from the expansion of the XUAR’s surge in security spending.

“We support the actions taken by the Administration to restrict visas for certain Chinese officials in the XUAR and to place 28 Chinese governmental and commercial organizations on the Commerce Department’s ‘Entity List.’ For too long, Chinese authorities and businesses have escaped accountability for their complicity in systematic and egregious human rights abuses in the XUAR. The Administration should encourage other nations to take similar measures because the mass internment of over a million ethnic Uyghurs and other Turkic Muslims is one of the world’s worst human rights situations. We also call on the Administration to take further action by imposing Global Magnitsky sanctions, including closing access to the U.S. financial system, against Chen Quanguo, XUAR Communist Party Secretary and Politburo member, and other officials in the XUAR complicit in these gross violations of human rights.”

For October 2019, CECC will hold hearings on "Forced Labor, Mass Internment, and Social Control in Xinjiang." It is not clear where this will go in terms of shaping US policy.  But it certainly has to be added to the mix of a complicated relationship between these two states. The description of the hearings provided by CECC follows below.

Over the last year, Chinese authorities in the Xinjiang Uyghur Autonomous Region (XUAR) expanded a system of extrajudicial mass internment camps, arbitrarily detaining one or more million Uyghurs and other Turkic Muslim minorities. New research and reports from international media outlets indicate that officials in the XUAR have instituted a far-reaching system of forced labor, requiring current and former mass internment camp detainees, as well as non-detainees, to work in food and textile production and manufacturing. Uyghur human rights groups, scholars, and international journalists have also documented the widespread forcible displacement of the children of Uyghur and other ethnic minority parents who are either detained or engaged in forced labor.

The use of mass internment and forced labor, alongside other policies that appear to seek the eradication of traditional cultural and religious practices, contravenes the commitments made by China in signing the Universal Declaration of Human Rights (UDHR), including the rights of all peoples to non-discrimination, to free choice of employment, to enjoy just and favorable conditions of work including the right to remuneration, and to take part in cultural life.

On October 7 and 8, 2019, new U.S. government sanctions targeting Chinese officials, as well as governmental and commercial organizations for having contributed to the severe human rights abuses in the XUAR, were announced.

This hearing will look at forced labor, mass internment, and social control in the XUAR. Witnesses will provide testimony on forced labor and other egregious human rights abuses, examine how products made in the XUAR’s forced labor camps have entered global supply chains, and provide recommendations to the U.S. Administration and Congress.

The hearing will be livestreamed on the CECC’s YouTube page.

Adrian Zenz: Non-resident Senior Fellow in China Studies at the Victims of Communism Memorial Foundation and author of “Beyond the Camps: Beijing’s Grand Scheme of Forced Labor, Poverty Alleviation and Social Control in Xinjiang.”
Nury Turkel: Washington-based attorney and Chair of the Board for the Uyghur Human Rights Project, which he co-founded in 2004.
Michael Posner: Jerome Kohlberg Professor of Ethics and Finance and the Director of the Center for Business and Human Rights at NYU’s Stern School of Business and former Assistant Secretary of State for Democracy, Human Rights, and Labor.
Amy Lehr: Director of the Human Rights Initiative (HRI) at the Center for Strategic and International Studies (CSIS) and former legal adviser to UN Special Representative on business and human rights.