There has been much coverage of the latest round of activity by students and government responses around the current situation in Hong Kong. While many governments, including that of the United States, will likely react in their own ways to the final resolution of the Hong Kong situation (e.g., U.S.--"What the US Is and Isn't Doing About Hong Kong"; H.R.3289 - Hong Kong Human Rights and Democracy Act of 2019), it might be useful at this point to read carefully the statements of the core of the current Chinese leadership collective. 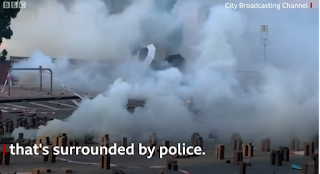 To that end I have provided below习近平：止暴制乱 恢复秩序是香港当前最紧迫的任务 [Xi Jinping: Stopping the storm and restoring order is Hong Kong's most urgent task at present] made available by Chinese state media organs on 14 November 2019. It is worth a careful read. Provided below is the official English and Chinese versions, along with a slightly different English translation of the original. Note as well the Chinese two thrust narrative strategy--first in controlling the interpretation and implications of action in Hong Kong, and second developing further the foreigner intervention rhetoric that has been evolving since June 2019. None of this is new but might be usefully read in light of changing conditions on the ground.

The official English translation, made available today 18 November by the Chinese Foreign Ministry, follows. The difficulty with the official translation is the way that it flattens out some of the language as it appears in the original Chinese--and thus, to some extent, also flattens the meaning and message meant to be conveyed in the original to Chinese speaking populations.

Xi Jinping: The Most Urgent Task for Hong Kong at Present Is to End Violence and Chaos and Restore Order

On November 14, 2019 local time, President Xi Jinping made clear the Chinese government's solemn position on the current situation in Hong Kong when attending the 11th BRICS Summit in Brasilia, Brazil.

Xi Jinping noted, the continuous radical, violent and criminal activities in Hong Kong have severely trampled on the rule of law and social order, severely undermined Hong Kong's stability and prosperity, and challenged the bottom line of "one country, two systems" policy. The most urgent task for Hong Kong at present is to end violence and chaos and restore order. We will continue to firmly support Chief Executive in governing Hong Kong Special Administrative Region in accordance with law, and support the Hong Kong police in strictly enforcing law, and support the Hong Kong judicial organs in bringing violent criminals to justice according to law. The Chinese government is determined to safeguard national sovereignty, security and development interests, implement the "one country, two systems" policy, and opposes any foreign interference in Hong Kong affairs.

Here is a slightly different version; notice the difference:


Xi Jinping: Stopping the storm and restoring order is Hong Kong's most urgent task at present.

Xi Jinping pointed out that the persistent violent criminal acts in Hong Kong have seriously trampled on the rule of law and social order, seriously undermined Hong Kong's prosperity and stability, and seriously challenged the bottom line of the "one country, two systems" principle. Stopping the storm and restoring order is Hong Kong's most urgent task at present. We will continue to firmly support the Chief Executive to lead the Government of the Hong Kong Special Administrative Region in accordance with the law, firmly support the Hong Kong Police in law enforcement, and firmly support the Hong Kong Judiciary in punishing violent criminals. The determination of the Chinese government to safeguard national sovereignty, security, and development interests is unshakable. The determination to implement the "one country, two systems" principle is unwavering, and the determination to oppose any outside forces' interference in Hong Kong affairs is unwavering.