“Located in a suburb of Shanghai city, Zhujiajiao is an ancient water town well-known throughout the country, with a history of more than 1700 years. Covering an area of 47 square kilometers, the little fan-shaped town glimmers like a bright pearl in the landscape of lakes and mountains.” Zhujiajiao Ancient Town, Travel Guide China.com.   The Chinese understand its beauty in a poetic as well as historical sense.  "The ancient streets paved with stone slabs, deep and quiet alleyways, arched stone bridges, little creaking boats all express the beauty of water in the ancient town of Zhujiajiao. The antiquity of the bridges, the rareness of the streets and the seclusion of the alleyways all present you a scene of "boats sailing on the water and people touring in painting." (SHCR, Zhujiajiao).

So began an interesting day that combined a number of interesting intersections as town and mind continued to be mapped within a dynamic culture. This was a day for boiled toad, water snails and sweet wine. These delights lubricated a series of intense and thoughtful conversations about the character of the Chinese Constitutional system. 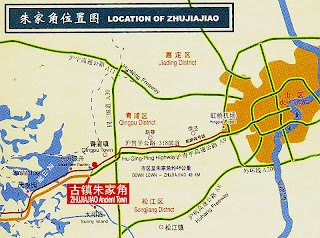 The conversation itself could be mapped as a series of surprises. The first surprise was that a Westerner was aware of or interested in shuanggui from a legal and constitutional perspective. The surprise was deepened when the expected position from a Westerner—that shuanggui was both extra legal and unconstitutional without a doubt—failed to materialize. My surprise, the willingness of my hosts to consider the practice extra-constitutional, was augmented by the elaboration of arguments from necessity that were both thoughtful and well considered. By the end we had a set of role reversals of sorts—the Westerner defending the practices as both constitutional and at least theoretically amenable to discharge within contemporary rule of law standards, and the Chinese worried about the deleterious effects of the practices on the rule of law and a willingness to see the practice as extraordinary temporary.