Democracy Part XXIV: Mass Democracy Not in My Backyard

In the West, influential individuals within the academy, government, business and the media appear to embrace expressions of mass democracy and mass sentiment only when it is convenient. 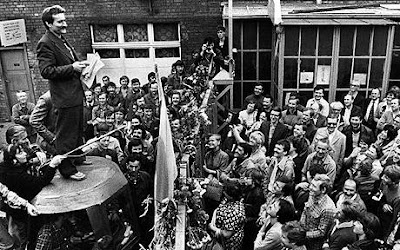 Such expressions are almost always convenient when they occur in the home states of rivals and competitors.  But mass democracy and mass expressions of political power are invariably deemed to include a criminal element the views of which are incoherent where these expressions occur within states which view themselves as fundamentally democratic in the conventional sense.  Indeed, in those states, mass movements are viewed, perversely, perhaps, as anti-democratic. Larry Catá Backer, Scenes From the Streets of Barcelona: Direct Democracy, Disenchantment and the Globalization of Resistance, Law at the End of the Day, June 19, 2011.  Thus, for example, the efforts to suppress mass demonstrations against economic anti-democratic movements that started in Europe in the summer of 2011, usually on the grounds of sanitation and public safety, might be contrasted to the encouragement of mass movements in the Middle East. But even in these cases, democratic mass movements tend to be subject to a multilateral will beyond that of the people. 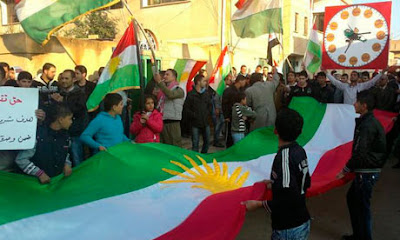 (Julian Borger, Syria crackdown continues prompting urgent Arab League talks, The Guardian, 6 Nov. 2011) ("Protests against the regime continued on the first day of the Islamic festival of Eid-al-Adha in places such as Alsnmin near Deraa. Photograph: Reuters"))

Arab League arranges emergency meeting to discuss Assad's failure to stick to peace plan after death of 13 on Islamic holy day . . . At the weekend the Arab League's secretary general, Nabil al-Arabi, warned that failure to implement the Arab peace talks, which involved the return of troops to barracks and the freeing of political prisoners, would have "catastrophic consequences for the situation in Syria and the region".

It is unclear what action the Arab League might take. Its decision to turn against Muammar Gaddafi in Libya ultimately proved fatal to the regime, as it cleared the way for a UN resolution mandating Nato's military intervention. However, Russia is much closer to the Syrian regime and has complained that it was misled over the extent of Nato's intended role in Libya, so Moscow has so far resisted concerted international action against Damascus.

The French foreign minister, Alain Juppé, said the latest deaths had made it clear there was "nothing more to expect from this regime and that despite its occasional announcements it will not commit to a programme of reforms".

Juppé told Europe 1 radio: "Different initiatives have been taken to try to bring Bashar al-Assad to dialogue. You can see what happened to the last one: Bashar al-Assad accepts the Arab League peace plan and the next day he massacres dozens more people in the streets."

The second and more troubling has been the tremendous efforts asserted by the European Union on the government of Greece to avoid a public referendum on the adoption of austerity measures demanded by the Eurozone institutions to avoid financial collapse. In this case, what is suggested is that popular sovereignty, even when expressed by conventional methods, must fall before the multilateral will. 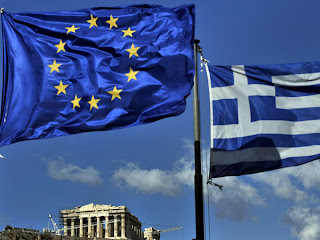 (From Opening Bell: Cautious optimism in markets ahead of Greek vote, Financial Post, June 21, 2011)
The sentiment was perhaps best expressed  by the novelist George Zarkadakis:

Greece is the cradle of democracy, but, as the world saw this past week, a financial crisis is no time to put important questions to the people. Prime Minister George Papandreou’s proposed referendum on the country’s loan deal with the European Union, called off quickly after intense international opposition, illustrated that perfectly. Plato and Aristotle would have approved of dropping the referendum. They didn’t like democracy of the direct kind. Neither trusted the people that much. . . .

The Greek financial crisis is a crisis of identity as much as anything else. Unless the people redefine themselves, this could become the perfect catastrophe: a country designed as a romantic theme park two centuries ago, propped up with loans ever since, and unable to adjust to the crude realities of 21st-century globalization.  (From George Zakardakis, Opinion: Modern Greece’s real problem? Ancient Greece, The Washington Post, Nov. 4, 2011). 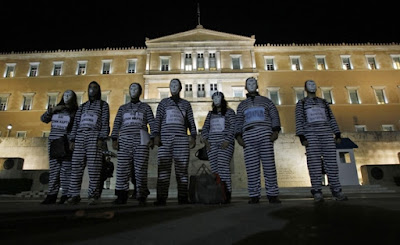 (From George Zakardakis, Opinion: Modern Greece’s real problem? Ancient Greece, The Washington Post, Nov. 4, 2011 ("Cutbacks demanded by international lenders have led to a public backlash, with tens of thousands of Greeks flooding into the main squares of cities across the country.")).

This is not to suggest that the new political arrangements are wrong.  It is only to remind one that even the most important ideological frameworks for contemporary times is contextually driven and subject to the constraints of the structural framework from which it arises.  In this case, it is clear that mass democracy can be used as a means to project ideology beyond a state, and might be used toi manage the expression of political accountability within states that see themselves as legitimately democratic.  But they may not be used without permission.
Posted by Larry Catá Backer at 11/06/2011 08:32:00 PM