Call for Papers: 2016 Conference of the Law and Society Association of Australia and New Zealand 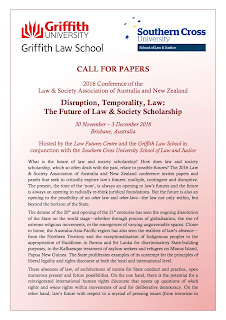 I am happy to pass along a call for papers for the 2016 Conference of the Law and Society Association of Australia and New Zealand.  The Conference is hosted by the Law Futures Centre, Griffith University Law School in conjunction with the Southern Cross University School of Law and Justice. The Conference will be held from 30 November to 3 December 2016 in Brisbane.

The Conference theme is Disruption, Temporality, Law: The Future of Law and Society Scholarship.  It offers a marvelous opportunity both to take stack and to advance the discipline. The Call for paper and Conference description follows.  It may also be accessed HERE.

CALL FOR PAPERS
2016 Conference of the Law & Society Association of Australia and New Zealand
Disruption, Temporality, Law: The Future of Law & Society Scholarship
30 November –3 December 2016
Brisbane, Australia
Hosted by the Law Futures Centre and the Griffith Law School in conjunction with the Southern Cross University School of Law and Justice

What is the future of law and society scholarship? How does law and society scholarship, which so often deals with the past, relate to possible futures? The 2016 Law & Society Association of Australia and New Zealand conference invites papers and panels that seek to critically explore law’s futures: multiple, contingent and disruptive. The present, the time of the ‘now’, is always an opening to law’s futures and the future is always an opening to radically re-think juridical foundations. But the future is also an opening to the possibility of an other law and other laws—the law not only within, but beyond the horizon of the State.

The demise of the 20th and opening of the 21st centuries has seen the ongoing dissolution of the State on the world stage—whether through process of globalisation, the rise of extreme religious movements, or the emergences of varying ungovernable spaces. Closer to home, the Australia-Asia-Pacific region has also seen the realities of law’s absence— from the Northern Territory and the exceptionalisation of Indigenous peoples to the appropriation of Buddhism in Burma and Sri Lanka for discriminatory State-building purposes, to the Kafkaesque treatment of asylum seekers and refugees on Manus Island, Papua New Guinea. The State proliferates examples of its contempt for the principles of liberal legality and rights discourse at both the local and international level.

These absences of law, of architectures of norms for State conduct and practice, open numerous present and future possibilities. On the one hand, there is the potential for a reinvigorated international human rights discourse that opens up questions of which rights and whose rights within movements of and for deliberative democracy. On the other hand, law’s future with respect to a myriad of pressing issues (from terrorism to

food security, climate change to human trafficking), may rest in other ways of thinking through law’s relation to the social—in particular, the relation to violence when that violence emanates from the State and its institutions, both public and private. Violence or disappearance need not always be explicit. Often its most pernicious consequences are, as Gayatri Spivak reminds us, the legacy of epistemological configurations that are temporal in nature—caught within ways of thinking of a particular time, or in relation to a particular thinking of time itself.

As such, we invite papers, panels or streams that consider the nature of the multiple pasts, present and futures of law and law and society scholarship in both its continuous and disruptive capacities. Such papers might consider:

- Future and past relations of law to the not-human (animal, nature, corporation, robot);

- The future(s) of transitional justice;

- The rise of religious fundamentalisms in relation to the State;

- 21st century transformations of legal services and the legal profession;

- The relations of law to space, movement and temporality;

- Chinese state power and the spatial reimagining of the South China Sea;

- Any other topic that fits within the tradition and/or future of law and society scholarship.

Please submit proposals for papers, panels or streams to LSAANZ2016@griffith.edu.au. Proposals should consist of a short abstract (max. 250 words), 3 keywords and a short biography (100 words). Panel proposals should include a title/theme for the panel, and abstracts, keywords and biographies for each presenter.