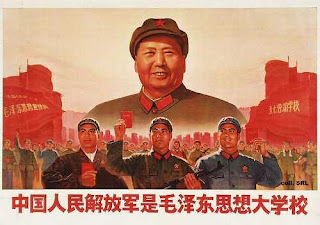 This year marks the 50th anniversary of the Great Proletarian Cultural Revolution in China. That episode remains sensitive in China, and like other great transformative events in human history, continues to reverberate in countless ways. It's cultural artifacts have acquired a global dimension--from Mao Zedong's Little Red Book (毛主席语录), to the mythologies of the Red Guards as an archetypal force that saw its pattern repeated across the globe (e.g. here, here, here).
Recently Gao Dawei on his blog 高大伟 在美国华盛顿人的博客 published a remarkable essay on the Cultural Revolution first anonymously and then under the author's name, Zhou Ruijin (English) (中国语文) (Text of the article copied from the China Elections and Governance website ). That essay, Reflections on the Cultural Revolution: A Ten Thousand Character Petition (皇甫欣平：文革反思万言书) By Huangfuxinping [Zhou Ruijin 周瑞金 ], harks back to an ancient Chinese practice of presenting such 10,000 character petitions "sometimes at great personal risk, to criticize current policies and suggest a change in thinking." . at . According to that website, the article was published under the pseudonym in China but was removed from many sites shortly after appearing.
The essay includes much to think about, not just in the Chinese context, but in any context in which one party, or elite group, has developed a structural basis for its leadership of the state and its governmental apparatus.  That applies as much in Marxist Leninist states (to which the essay is directed) as it does in theocratic states (the clerical elite) and Western states (the socio-economic-political elites).  To that end, Flora Sapio, Jean Mittelstaedt and I thought it might be worthwhile to add very brief reflections on this essay.