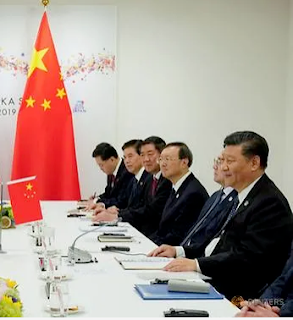 As noted in a prior post, the Coalition for Peace & Ethics Working Group on Empire has been following the events around the reconstruction of the global trading order through the lens of the bilateral negotiations between the United States and China.  In particular, while it has been considering the specifics of an eventually constructed agreement, the WGE has focused more attention on the construction of something perhaps even more durable--new theories of empire that will sustain the visions being developed now under the leadership of Presidents Xi and Trump. (See CPE EmpireSeries) 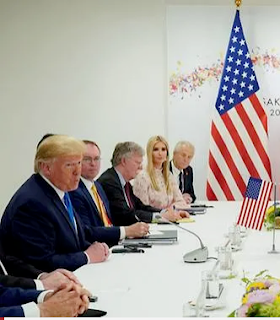 While the complex contradictions and battles for control of the narrative of trade in the West is dynamic and contingent, at least it is readily accessible, the Chinese positions are perhaps less accessible outside of the leadership cores of that nation. To the end of centering Chinese perspectives to better balance analysis of the quest of these two great nations to remake the world between them, the CPE-WGE has focused analysis on key pronouncements of the Chinese leadership (with a sensitivity to whether they were constructed for internal or external consumption). The object is not criticism but decoding (something beyond mere translation).

This post is the second of 2 posts in which the CPE-WGE considered Xi Jinping's important speech delivered at the recently concluded G20 Leaders' Summit in Japan provides another indication of the perspectives and objectives of China's leadership core with respect to the necessary ordering of global trade to its liking.  Understanding that perspective is essential if one is to better understand the parameters within which China is prepared to negotiate, and beyond that, those parameters with respect to which its partners must be willing to go it alone--either without China or in competition with it. The English and original text (中国语文) of the Speech, "Work together to create a high-quality world economy" [携手共进，合力打造高质量世界经济] may be accessed HERE.

Our first set of reflections, The Meaning is in the Title--Reflections on Xi Jinping Speech, "Work Together to Create a High-Quality World Economy, was prepared by Larry Catá Backer.

Our second set of reflections, G20 in the Shadow of Belt and Road-- Reflections on Xi Jinping Speech, "Work Together to Create a High-Quality World Economy, was prepared by Flora Sapio and follows below.

G20 in the Shadow of Belt and Road-- Reflections on Xi Jinping Speech, "Work Together to Create a High-Quality World Economy
Coalition for Peace & Ethics--Working Group on Empire
Flora Sapio

On June 27, in the hours before the beginning of the G20 Summit, an opinion piece entitled “Only win-win cooperation can create the future of the world” appeared on the People’s Daily. The article was signed with the nom de plume ‘yanzhi’ 言之- he who speaks, and was published on the eve of President Xi Jinping’s address at the G20 Leaders’ Summit - “Work Together to Create a High-Quality World Economy.”

The G20 is not considered as one of the multilateral cooperation mechanisms useful to achieve the goals of the Belt and Road. This, however, matters little. Aside from the United States, several of the countries that took part to the Summit are either partners in the Belt and Road Initiative, or members of the AIIB. This circumstance sheds a partially different light on the Summit. As the Working Group on Empire observed on June 30, the Summit provided an opportunity, for President Donald Trump and President Xi Jinping to ensure that “they each protect the highest principles and aspirations of their respective countries”.

Some of China’s principles and aspirations were summarized in Xi Jinping’s address. Much of the meaning of  Xi Jinping’s address is in the title of his speech. But, the G20 speech has more than just one layer of meaning. The G20 speech is to be read in conjunction with the 27 June opinion piece. The opinion piece is not a substitute for the G20 address, but helps situating Xi Jinping’s speech within a perspective that perhaps is the most useful – a perspective internal to the speech, and to China’s governance system.  The G20 and other similar fora are sometimes characterized as ‘multinational’ or ‘transnational’ events. These characterizations have the effects to relegate those fora to a level that is seldom found interesting or deserving of attention by those in jobs that do not require paying attention to what goes on beyond the nation-state. The People’s Daily may not be read by every one of the persons who live in China. But, the June 27 opinion piece made it clear that, at least to the Author of the opinion piece, the border between domestic governance and governance beyond the State is becoming thinner and thinner.

The June 27 opinion piece places the G20 Summit against the backdrop of the Belt and Road Initiative. This choice signals, as the anonymous commentator observes, that China’s participation to the G20 testifies to China’s ‘foundational role as a responsible great state’ (负责任大国的建设性作用). The opinion piece then discusses the importance of avoiding unilateralism, protectionism, and adopting measures to sustain global economic growth, and a multilarealism based on rules. Reading this opinion piece as a one-sided advocacy piece for the BIR would be misleading. The most effective advocacy for the BIR is the ability to produce facts, facts that are visible and tangible to those who would not normally concern themselves with the G20, or with globalization.

The production of those facts is not only projecting Chinese power outside of China. And it is not only making China’s development vulnerable to import tariffs. It is continuing to produce a form of governance that already exists beyond the State, in the absence of an agreed upon conceptualization. Notions of power projection and of vulnerability to import tariffs are anchored to the logic of the nation-state. It is not clear that the BIR attempts to overcome that logic, yet. Quite the contrary, the entire design of the Belt and Road Initiative rests upon ideas and instruments rooted in a Westphalian conception of the State. But, after all, those are the only ideas and instruments available to us. There is nothing else a State can use to extend its power abroad, than the ideas and instruments we already have.

Those ideas and instruments, however, can be put to new uses, uses that were perhaps not intended or anticipated by their creators. New interpretations and new uses of available ideas and instruments can be helpful to steer those governance processes that are already shared. All that it takes to be at the helm of globalization is the ability to identify the ideas and the instruments to justify the existence of governance processes that are already running as if domestic borders did not exist. But, that is no mean feat. Limits – be they the borders into which the domains of public administration and governance can be separated; the branches into which knowledge can be divided, or anything else – can provide a sense of security to many. Real-world convergence can be observed and it can be theorized. Much more difficult is finding a solid consensus about it. One that acknowledges convergence, accepts it, and finds a way to make it progress. In the meantime, Xi Jinping’s G20 address makes it clear how the responsibility that rests upon the shoulders of the core leadership is a heavy one. Those interested in the details about the theoretical foundations of that responsibility will find ample detail in Xi Jinping’s speech.