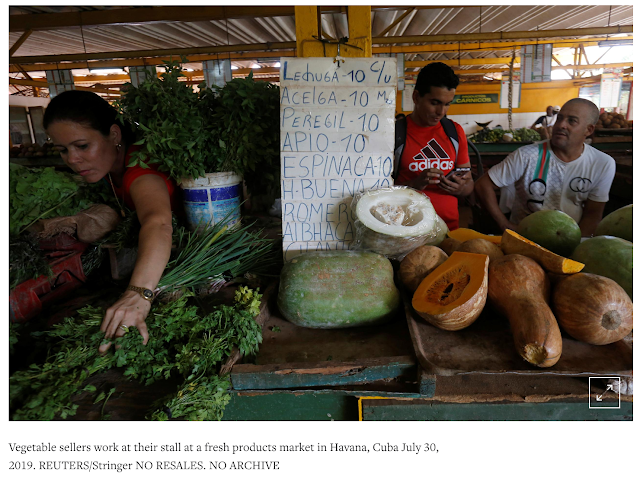 Reuters is reporting ("Cuba, battling economic crisis, imposes sweeping price controls") that the Cuban State has announced a series of sweeping controls on prices in the public and private sectors in the wake of the mounting economic crisis that is deepening in Cuba.  That crisis, in turn has been made much more acute by the crisis in Venezuela (a principal supporter of the Cuban economy) with respect to which neither Russia nor China has provided an effective substitute.  More importantly, perhaps, is the growing effects of the trade restrictions and targeted sanctions imposed by the Trump Administration in response, in part, to Cuba's support of the Maduro regime in Venezuela (e.g., (1) The Pivot Toward the Caribbean; and (2) Announcement of Changes in US Policy Toward Cuba and the Caribbean Region: Remarks of US Secretary of State Michael R. Pompeo; Speech of John Bolton (anuncia nuevas sanciones para Venezuela, Cuba y Nicaragua) 17 April 2019).

The reporting by Marc Frank for Reuters follows.  A few small points.

First, price controls will have more symbolic than real effect.  Even in the small private sector, the state maintains a substantial control on pricing even before the freeze.

Second, the object appears to have been, as suggested in the anonymous quotes, to suspend the market during this new "special period" and to rethink the nature of its complementary role in economic planning. For the moment that might involve redirecting such production to meet shortfalls at the retail level.

Third, the increased wages and pensions will have a negative effect on the economy. The problem right now is that already too much cash is chasing too few goods.  The result of these increases will be either inflation or an inflated pricing scheme for the black market or barter transactions.

Fourth, as a result, it will be difficult to both stimulate production (in the absence of state subsidies or orders) and combat inflation (while pouring more money into an economy where there are production shortfalls and no hard currency to meet demand with foreign goods).

Fifth, this planning will only work if Russia, China, and Venezuela (the key players, there are others) will step in with subsidies. These traditionally involve overpaying for Cuban services (directing the surplus to the state), or underpricing goods and services provided to Cuba. Much of this will likely remain opaque and hard to gauge.

Sixth, enforcement, as suggested by Marc Frank, will likely be difficult and itself expensive.

The tactful warnings of Pavel Vidal and Andrew Zimbalist (quoted in the reporting) will not be heeded.  But that is because the state ideology makes those approaches incompatible with the fundamental vision of the Cuban political-economic model (Cuba's Caribbean Marxism).


Resolutions published in the official gazette banned all retail and wholesale price increases except for products imported and distributed by the state where already-set profit margins cannot be increased.

“In effect they have suspended what there is of a market,” a Cuban economist said, asking not to be identified due to restrictions on talking to foreign journalists.

While state-run companies dominate the economy, reforms in recent years have led to a growing private sector of cooperatives, farmers, small businesses and self-employed individuals who, for example, work in the skilled trades or drive taxis, and in general operate on a market basis.

Resolution 302 of the Finances and Prices Ministry lists all actors in what is called the non-state sector, saying that they “cannot increase current prices and tariffs of products and services.”

Cuban President Miguel Diaz-Canel announced earlier this month that the government had adopted a series of emergency measures to fight economic stagnation and dwindling foreign currency earnings that began in 2015 as the economy of key ally Venezuela imploded, and which have been aggravated by a series of new U.S. sanctions.

The measures included increased wages and pensions for more than 2 million state employees, amounting to more than 8 billion pesos annually, or close to 13 percent of this year’s budget.

Cafeteria owner Manuel Rodriguez, like other small business owners, said he had no problem with the controls if the state and informal sector complied, which he doubted.

“I agree and would comply with regulating prices, but domestic products are scarce in stores and we must resort to imported ones that are more expensive,” Rodriguez said.

Economist Andrew Zimbalist, a Cuba expert at Smith College in the United States, said, “Such measures are usually okay for short periods of time, but if they stay in place they begin to create serious distortions in the economy.”

“The more they control prices in formal markets, the more inflation and instability there will be in informal markets and the less incentive the productive sector has,” he said.