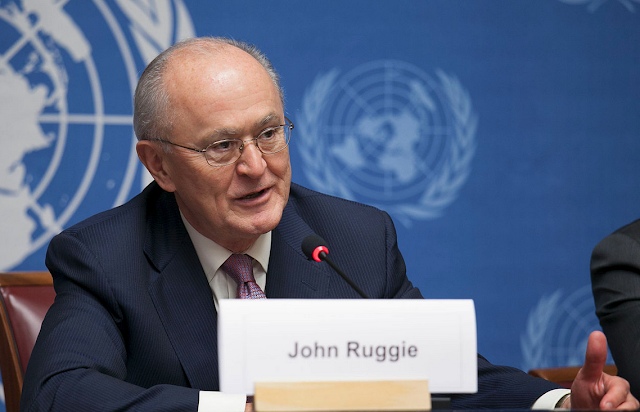 This now iconic picture of John Ruggie ((18 October 1944 – 16 September 2021)  Berthold Beitz Research Professor in Human Rights and International Affairs at Harvard's Kennedy School of Government, Affiliated Professor in International Legal Studies at Harvard Law School., and best remembered as the UN. Secretary-General's Special Representative for Business and Human Rights is perhaps the way that John might have wanted to be remembered.  It certainly is the way that many of us will freeze his image in our minds--thumbs up, empathically intense, and persuasively speaking at the highest levels of the United Nations in the service of what had once been dismissed as an unattainable goal--the development of a framework for managing the human rights impacts of economic activities by states and business, and the framework for the provision of remedies for those suffering human rights harms.

The Coalition for Peace & Ethics mourns his passing even as we celebrate a life well lived.  John was able to do something quite remarkable--he made revolutionary transformations seem not just perfectly ordinary.  He listened; he listened harder when what he was hearing took him outside his comfort zone.  He had an exquisite sense of the politically possible.  And he was able to reassure people; to make them feel comfortable and to trust his judgment even when it might have collided with their own presumptions.  I saw him work his magic often.  I enjoyed the humor and sense of irony that made our times together so delightful. And it was always a lesson learned to see how respectful John was, even of of who might not share his views. But mostly, for us at least here at the Coalition for Peace and Ethics, it was John's humanity that made possible the synergies of the efforts of countless people all of whose talents he was able to marshal in the accomplishments of the great tasks of changing the way in which important collectives now see and understand economic activity specifically, and the role of humanity on this planet more generally.

In retrospect, it was an almost seamless transition from the global compact and Millennium Development Goals to what became the three pillar framework of the UN Guiding Principles for Business and Human Rights and the Sustainability Development Goals.  But at the time  connecting those dots would have been nothing short of miraculous. Both tracks--the one focusing on the human rights effects of economic activity, the other eventually to provide a mechanism for reframing the way in which humanity related to the world around it as it fashions its collectives and seeks through them to provide people with better and more fulfilling lives (however that is measured)--eventually changed the direction and of and baseline for thinking about the human in economic activity, and the planet in human activity. Global collectives still fight (euphemistically engage in passionate debate about) what this means--and developing meaning and narratives around these baseline concepts and its foundational frameworks now occupy a lot of time--but all of that engagement is now undertaken within the meaning framework that John was instrumental in building and in getting critical actors to embrace (however grudgingly, for whatever ends, and for however short a time).  For that alone, John secured his place as one of the great leaders of the transition of thinking about economic activity and about humanity's role as a tenant on this planet.

John distrusted rigidity; he was wary of empty legalism; and he saw through the inhibiting pantomime of replicating past practices onto current realities.  He planned for the future, respectful of the past but unwilling to serve merely as the person who dressed the present in the increasingly ill fitting corsets of  (what for many were and for some still are) the comforting  remembrances of the past. That fearlessness, that principled pragmatism as he liked to call it (the term was meant to give comfort to those who were more fearful of losing their mooring in the past even as they understood the transformations emerging in the present and looking forward to a changed future landscape), opened the door to several key innovations. These innovations, so radical just a short time ago, now appear increasingly ordinary in the political, legal, societal and economic fields.  Among them was the decisive role of private law as the great engine for filling the governance gaps of transnational economic activity.  With that came the acceptability (still contested to be sure) of the principle of polycentricity in governance and the recognition that plural sources of law, norms and expectations would have to be given effect, navigated, and could be used as the basis for prevention, mitigation and remedial strategies at the heart of the UNGP framework.  Along with that came the acknowledge of the power of markets (rather than, in tandem with, or without the apparatus of public law) to order behavior and to construct and manage expectations of positive behavior  respecting human rights (and eventually sustainability). And lastly, and perhaps most remarkably, the recognition that states, non-state actors, and enterprises might each serve regulatory roles both in the construction of normative orders, and in its enforcement that would not be dependent entirely on states.

For all of this--for making respectable and ordinary what before 2005 would have seemed impossible, we salute John. He will be remembered.  His example will serve as a guide for those of us who will come after.  And lastly, his dedication to the preservation and enhancement of the dignity of individuals, of their collectives, and of the earth on which such activity is possible, ought to serve future generations as the baseline premise for continuing to develop the structures of human rights and sustainability respectful systems of collective human organization.   To his family and friends, our deepest condolences. Rest in peace.