This is another in what has become a long series of aphoristic (ἀφορισμός) essays, though now more in the style of epigrams (ἐπιγράφειν), meant to provoke rather than explain. The hope is that, built up on each other, the series will provide a matrix of thoughts that together might lead the reader in new directions. Though each can be read independently of the others, they are intended to be read together and against each other. This continues the explorations started in Ruminations 46--Epigrams on Governance Beyond the Human Condition (March 309, 2013). 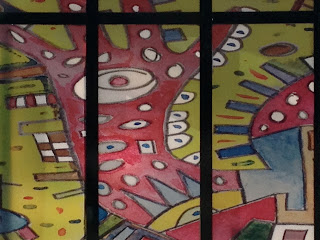 These center on the state vainglorious and the replication of the vainglory by those institutions and individuals who derive meaning only in the reflection of or through the application of the disciplinary methodologies of the state.


13. An old man defending his home against an unknown intruder is shot dead by police raiding his house in error. As police and military tactics and sensibilities converge and as the idea of a necessary passivity in the face of exercises of the police power is more strongly inculcated in the population then it follows that while people may mimic the use of lethal power in the homes against an inferior stranger with impunity they may as well be subject to the application of such lethal force against them in their own homes with impunity by any politically superior force.

14. We are told that years of charitable endeavors in Haiti has produced the expenditure of billions of dollars and the creation of situations in some ways far worse than the humanitarian crisis to which all this money and effort was meant to respond. And thus is revealed again the essence of the problem, the trap of the self affirming narcissism of charity.

15. In Egypt Pharoahs would spend a lifetime building tombs for themselves—sealed off elaborate physical spaces meant to replicate the world to come or at least to serve as its gateway, one for all the rest of the world to see and marvel, and one built with the forced labor of the people who by contributing to this effort somehow become invested in its glory. In the United States, those who become president spend a lifetime building a tomb for themselves as well. These Presidential libraries also replicate and represent worlds—but in this case worlds built with the tangible bricks of memory, cemented together to provide within the physical space of the library the incarnation of an eternal view of the past which with every visit by the people and every invocation of that past invests the tomb’s resident with glory.

16. Richard Falk, the UN special rapporteur on human rights in the Palestinian territories, suggested in a commentary published in Foreign Policy Journal that the Boston Marathon bombing attacks by two Muslim brothers from Chechnya were the result of the United States “global domination project” and Washington’s policy on Israel. “The American global domination project is bound to generate all kinds of resistance in the post-colonial world,” wrote Falk. Equally higher and higher officials in the United States, the United Kingdom and Canada were quick to criticize the remarks. Canadian Foreign Affairs Minister John Baird condemned Falk’s comments and called on the United Nations Human Rights Council to “immediately” remove Falk from his position. “Once again, United Nations official Richard Falk has spewed more mean-spirited, anti-Semitic rhetoric, this time blaming the attacks in Boston on President Obama and the State of Israel,” Baird said in a statement. Thus, a high official of the United Nations office of Human Rights has been criticized for In an age where things are understood as proceeding from elsewhere and where the normal state is passive and receptive, then it stands to reason that only those few actors who are invested with active will might be blamed for everything. A logical proposition grounded in a stunningly dismissive view of the dignity of most.

17. A University of Minnesota sophomore wrestler and aspiring musician was ruled ineligible to compete by the National Collegiate Athletic Association, a multi university institution ostensibly organized to protect amateur athletics at the university. The ineligibility stemmed not from the wrestler’s professional athletic activities but from impertinence—the wrestler refused to remove songs and music videos that feature him online, even though these ventures had not produced any income. Institutional arrogance is reprehensible. The collusion of universities and university stakeholders in the detrimental effects of these institutional absurdities is an altogether different, and to some extent more troubling, matter. Yet we think nothing of distinguishing between aggregating institutions like the NCAA and the universities that both make up all of its members and which use the organization as a cover for their collective policies. In this they are no different from nation-state who sometimes use the cover of international institutions to deflect criticism and blame for policy objectives they would rather not impose directly.

18. In 1971 the US ended the convertibility of the national currency into gold. Thereafter, the value of a currency would depend on popular belief of the value of that currency expressed through the mechanics of markets and the willingness of people to use the currency. Currency, then, becomes the ultimate semiotic expression—a physical manifestation, quite precise, of the collective belief of a community in the symbolic essence of the thing (bundles of value measured in a particular currency) that itself now represents communal belief in its value essence. The state, like our currencies, exit only because a community believes in the idea of it. That is the extent of magic within the sphere of human activity; it also suggests the power of fantasy in the construction of human reality. We make meaning by the assertion of collective will. And then we devote millennia working collectively to build on this shared meaning--one that is incarnated only through the relational mutuality of belief—an all too real administrative apparatus through which the collective layers an infinite covering of application that forms the hard shell of law, custom and morals, around the illusion of collective belief. The control of belief, then, becomes the highest political and economic objective of states and economic enterprises. Religion again becomes the highest ordering system for politics and economics.
Posted by Larry Catá Backer at 4/25/2013 03:32:00 PM