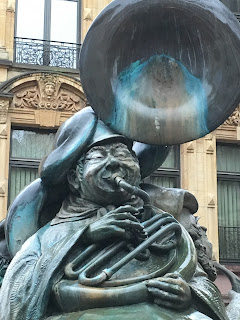 I have previously posted about the marvelous ASIL Business and Human Rights Roundtable, 'International Human Rights Law and Business: Evaluating the Impact of UNGPs’, which took place at The George Washington University on March 29, 2016, sponsored by the ASIL Human Rights Interest Group (see here).

At the Roundtable I presented some thoughts on drafting a treaty on business and human rights. My object was to examine the case for a comprehensive business and human rights treaty and to consider how one might go about drafting such a treaty now. I was particularly interested in recognition of the fundamental ideologies underlying the move toward a treaty, and the substantive provisions they suggest to produce a treaty core framework that preserves or advances those ideologies. This exercise should produce a base line, a coherence between principle, ideal and substantive provisions, against which actual treaty negotiations might be measured--and evaluated.

The PowerPoints of my presentation follow along with the abstract to the paper. The current draft may be accessed HERE. Comments and engagement most welcome! 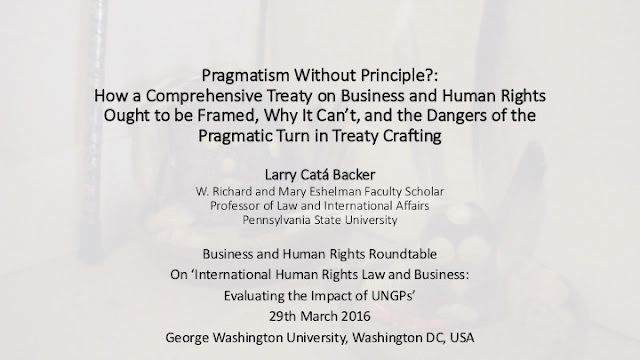 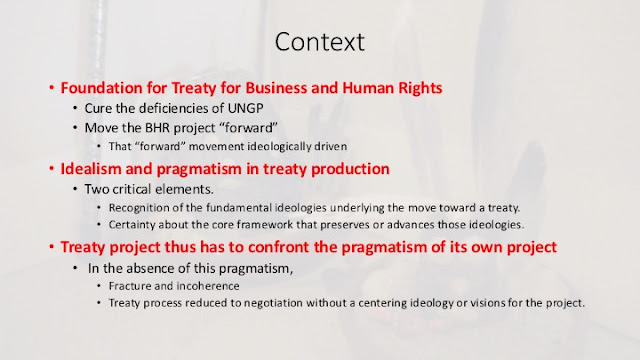 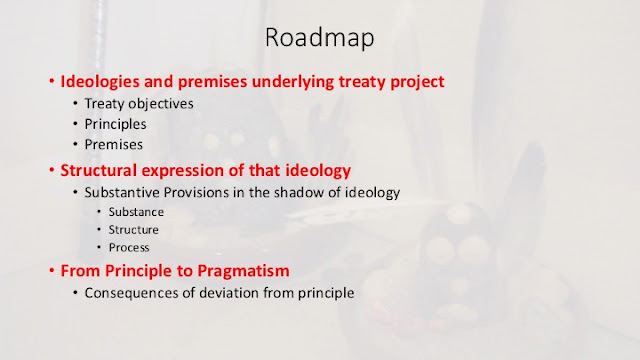 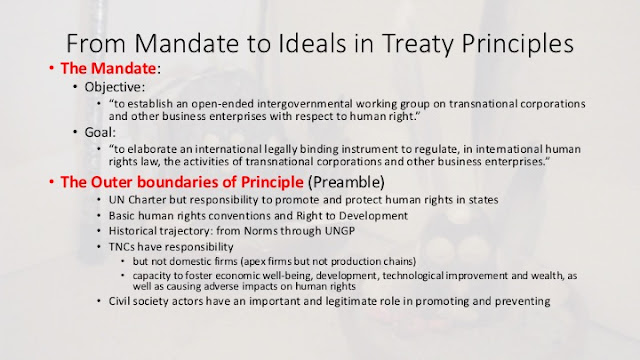 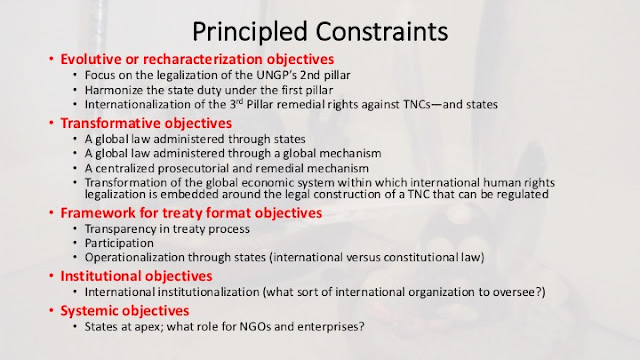 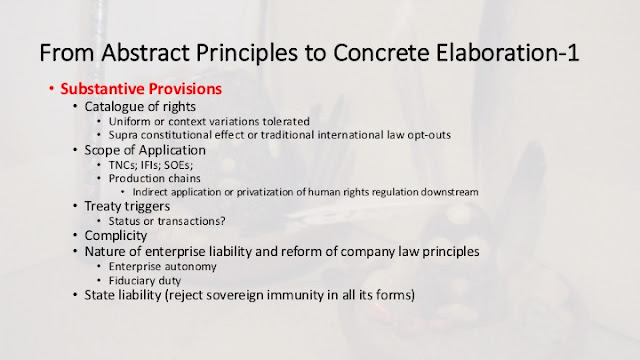 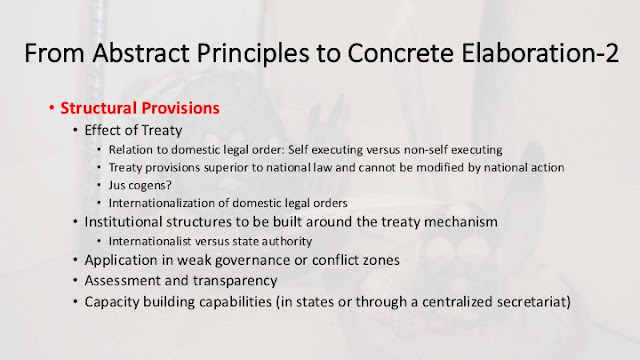 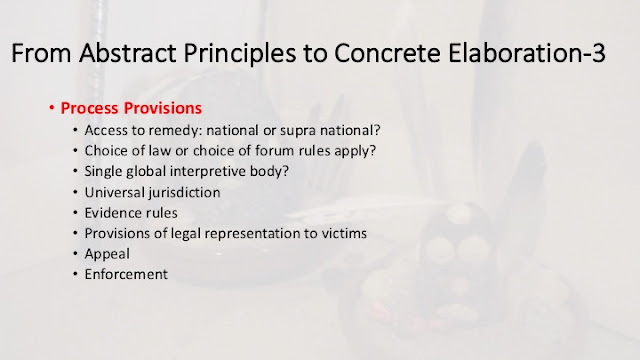 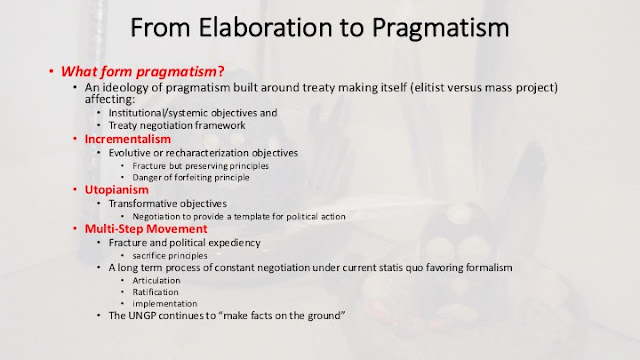 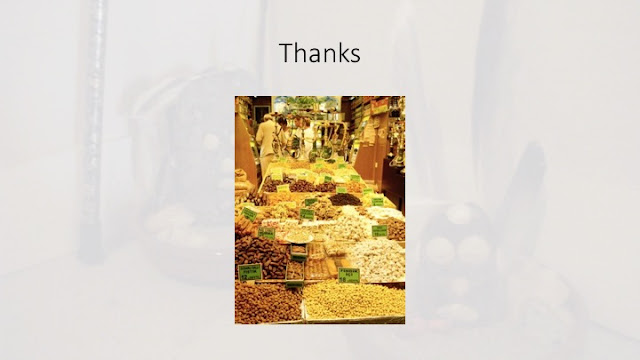 
Pragmatism Without Principle?: How a Comprehensive Treaty onBusiness and Human Rights Ought to be Framed, Why It Can’t, and the Dangers of the Pragmatic Turn in Treaty Crafting
Larry Catá Backer[1]

Abstract:
John Ruggie is both famous and notorious for advancing the notion of principled pragmatism as a basis for framing the three pillar “Protect-Respect-Remedy” framework and ultimately the Guiding Principles for Business and Human Rights endorsed in 2011. Principled pragmatism served as a lubricant to move discussion from the operationalization of the U.N. Guiding Principles for Business and Human Rights (UNGP) to the establishment, in June 2014, of an “open-ended intergovernmental working group to elaborate an international legally binding instrument to regulate, in international human rights law, the activities of transnational corporations and other business enterprises.”  The object of this effort was to cure the deficiencies of the UNGP, and apply principle unencumbered by pragmatism, to produce law to manage enterprises through states. But that application of principle does not occur in a vacuum unconstrained by history or the foundational principles that now serve to structure domestic and international law systems. This contribution considers the consequences of this effort.  After an introduction setting context,

Part II considers the framework for a comprehensive in its ideal form.  To that end, the starting point will be the objectives of the treaty exercise within the structures of the mandate through which it is considered. The Mandate delineates both the principles around which the treaty is to be written and the pragmatic constraints which limit the expression of principle in the substantive provisions of the treaty.  It then considers the range of ideological choices necessary to move from objective through ideology to its expression in pragmatic form. This suggests the range of pragmatic choices exposed by the principles underlying the move toward a treaty for business and human rights, its premises, provisions and approaches in light of those objectives and their underlying ideologies.

The essay ends with a consideration of the pragmatic limits to an idealized treaty.  It offers three distinct forms of principles fro pragmatic treaty construction--incrementalist, utopian and multi-step pragmatism. Pragmatism requires a reconciliation of principle with operationalization choices; here is pragmatism applied to principles.  It also demands an analysis in which one distinguishes between pragmatism relating to principle from that of pragmatism relating to attainment of objectives. This contribution, then, goes to the operational heart of the treaty process itself where the best intentions and deepest substantive principles of its proponents are confronted with both implementation choices (pragmatism of principles) and compromises of those animating principles themselves (principled pragmatism). This produces an irony that is briefly explored in the conclusion, an attempt at developing a coherent set of principles in the style of John Ruggie’s principled pragmatism but this time bent to the service of the treaty project.