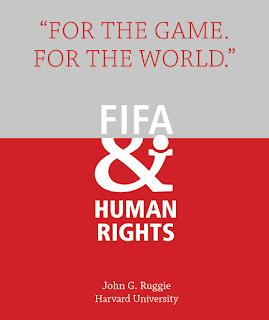 Does FIFA have autonomous responsibility to respect human rights in its activities?  Does FIFA have a responsibility to engage in substantial human rights due diligence respecting the operations of all entities (and states) with which it deals in connection with its activities? If banks are increasingly understood to have a responsibility to respect human rights in the context of its lending activities ought sports leagues to bear that same responsibility, and if so to what extent?  These are the questions that now face the architect of the U.N. Guiding Principles for Business and Human Rights as John Ruggie is tasked to formulate "human rights requirements for World Cup hosts and sponsors of the scandal-tarnished governing body."  (Associated Press, Human Rights Requirements for World Cup Hosts, FIFA Sponsors,  The New York Times, Dec. 15, 2015).  By March 2016, he "will provide a report in March showing how business and human rights principles he conceived for the United Nations can speedily become part of FIFA's statues." (Ibid). (FIFA's Responsibility to Respect Human Rights--John Ruggie to Report in March 2016 on Incorporation of the UN Guiding Principles for Business and Human Rights to Sports League)


I suggested that the UN Guiding Principles, and its responsibility to respect human rights ought to extend to sports leagues and non-governmental organizations operating as an enterprise--irrespective of their profit motive or the character of their activity. It was the institutional architecture of their aggregated activity that ought to trigger the responsibility (see also here, here, and here).

Professor Ruggie, working with SHIFT, has now produced his Report, “For the Game. For the World.” FIFA and Human Rights. It may be accessed here.

The Press Release from SHIFT follows along with the Abstract of the Report. My commentary will be posted shortly.

Thursday 14th of April 2016 08:40:37 AM
Shift supported the independent review and helped develop its recommendations


April 14, 2016 -- An independent report issued today by former Special Representative of the UN Secretary-General and Shift Chair John Ruggie recommends how FIFA -- the global governing body of football -- needs to manage the far-reaching human rights risks associated with its activities and relationships. Risks include the displacement of communities to make way for stadiums, risks to workers building tournament infrastructure or manufacturing FIFA-branded goods, and systemic challenges such as gender discrimination throughout association football.

Ruggie agreed to review FIFA’s existing policies and processes to manage human rights risks at FIFA’s request, following its mid-2015 announcement that bids for the 2026 Men’s World Cup will have to meet human rights criteria. He undertook the task on the basis that it would result in a public report, subject to his editorial control. The report sets out 25 recommendations for action.

“FIFA governs and supports a global network of over 200 national football associations and is connected through its tournaments to thousands of businesses. As for any international sports organization today, this kind of global footprint brings with it significant risks to people’s basic dignity and welfare. And that reality demands a robust and proactive response. FIFA is not solely responsible for solving these problems where the actions of others are the primary cause. But it must use its influence to address these human rights risks as determinedly as it does to pursue its commercial interests,” said Ruggie.

Ruggie’s recommendations for FIFA are based on the UN Guiding Principles on Business and Human Rights, the global standard on business and human rights of which he is the author. In its revised Statutes, adopted in February 2016, FIFA introduced a new provision committing it to respect all internationally recognized human rights.

“The key now is implementation. For my report to have the necessary impact, FIFA’s top leaders need to follow through on its recommendations. That means resourcing the administration adequately for the task and integrating the results of their work into political decision-making. I met with FIFA’s new President Gianni Infantino yesterday and valued the opportunity to discuss my findings and necessary changes at FIFA. It is my sincere hope that he will make this work a priority under his leadership,” said Ruggie. “FIFA’s reputation depends on it.”

Ruggie and Shift's Managing Director Rachel Davis will speak about the report next week at the 2016 Asia Regional Forum on Business and Human Rights, convened by the UN Office of the High Commissioner for Human Rights, on April 19-20 in Doha, Qatar.

In December 2015, FIFA asked me to develop recommendations on what it means for FIFA to embed respect for human rights across its global operations. The authoritative standard for doing so is the United Nations Guiding Principles on Business and Human Rights (“UNGPs”), endorsed by the UN in June 2011, of which I was the author. This report first lays out the relevant human rights context for FIFA, and then presents 25 detailed recommendations for action. They fall broadly under three areas of necessary change:

--From Constitution to Culture: FIFA needs to translate its commitment to respect human rights, included in its new Statutes, into its daily actions and decisions. This includes:


-Setting clear expectations for the work of all parts of the administration and equipping and resourcing staff to deliver;
-Ensuring that these efforts are fully reflected in and supported by decision-making on the part of FIFA’s leadership and governing bodies.

--From Reactive to Proactive: FIFA needs stronger internal systems to address the increasingly predictable human rights risks associated with its business. This includes:


-Evaluating the severity of risks to people across both its activities and its relationships;
-Building and using its leverage to address these risks as determinedly as it does to pursue its commercial interests.

--From Insular to Accountable: FIFA needs to provide greater transparency in managing human rights risks and improve access to remedy. This includes:

-Routinely discussing key issues with external stakeholders, including those whose human rights are at risk, and disclosing its efforts and progress in addressing challenges;
-Ensuring that access to remedy for human rights harm associated with FIFA is available not only on paper but also in practice.


Professor Ruggie was supported in the authorship of this report by non-profit Shift.

See the press release about the publication of this report