Upcoming Conference at Vanderbilt: Sovereign Conduct on the Margins of the Law, a Symposium 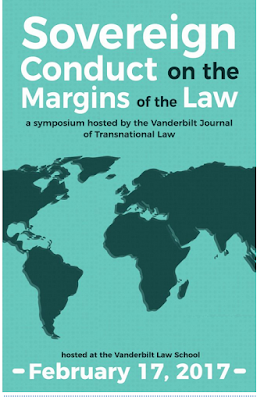 Issues surrounding sovereignty have received increasing attention over the last few years, most recently in Congress’s decision regarding Saudi Arabian immunity. The Vanderbilt Journal of Transnational Law is hosting four panels that will explore the various facets of these issues, such as: the involvement of sovereigns in cyber-crime; terrorism financing, the immunity aspects of state owned enterprises; and the problems surrounding sovereign debt crises. Participants in these panels will include practitioners and academics with expertise in each of these topics. This symposium will be held at the Vanderbilt Law School on Friday February 17, 2017 with CLE registration starting at 7:30.

The description of Conference panels and panelists follows. In a later post I will provide a summary of the proceedings.


The first panel will focus on the immunity issues surrounding sovereign wealth funds and state owned
enterprises. The participants in this panel include:

Prof. Larry Cata Backer, Professor at Pennsylvania State University Law School. His research focuses on the understanding of constitutional and enterprise law. His most recent work touches on the regulation of multinational corporations, sovereign wealth funds, transnational constitutionalism, and the convergence of public and private law. He also researches issues of governments as private actors in global markets, the development of law and social norm systems to regulate business and human rights.

Prof. Pammela Saunders, Professor at Drexel University Law School. Her scholarly interests are focused on issues related to the regulation of institutions and actors across national borders. Her current research explores the effectiveness of different strategies to regulate transnational corporations and to promote corporate social responsibility.


The second panel will be an interdisciplinary panel on the involvement of sovereigns in cybercrime to
perpetrate tax evasion and money laundering. The participants in this panel will include:

Mr. Eric Blinderman, Chief Executive Officer at Therium, Inc. and a seasoned international and commercial litigator during his tenure at Prosauer Rose LLP.

Ms. Tiffany McLee, Intelligence Analyst at the National Cyber-Forensics Training & Alliance (NCFTA) specializing in cyber threats affecting the financial services industry. Previously, she was a senior Anti-Money Laundering investigator for a financial institution. In this role, she was responsible for performing analysis and investigation of complex financial transactions to identify potential money laundering, terrorist financing, and other financial crimes.

Mr. Donald Good previously worked for 20 years at the FBI, most recently as the Deputy Assistant Director of the FBI’s Cyber Intelligence Outreach and Support Branch. Currently he is employed at Navigant.

Dr. Magnus Hörnqvist, Professor at Stockholm University. His research focuses on investigating the central issues in modern critical social theory, the obscene excitement in the ‘war on terror’ and the placid pleasures of prison reformers and spectators. Dr. Hörnqvist recently wrote on this topic in his article “Sovereign encounters with organized crime and money laundering in the realm of accountants.”

The third panel will focus on the Argentinian debt crisis and other similar issues. The participants will
include:

Prof. Anna Gelpern, Professor at Georgetown Law. She has published articles on financial integration, debt contracts, and development and has co-authored a textbook on International Finance. In addition, she has contributed to international initiatives on financial reform and sovereign borrowing, most recently as an expert for the United Nations Conference on Trade and Development.

Prof. Mark Weidemaier, Professor at University of North Carolina at Chapel Hill Law School. His research interests involve the intersection between contracts and dispute resolution in domestic and international settings, as well as issues related to the structure and enforcement of government debt.

Prof. Veronica Santarosa, Professor at the University of Michigan Law School. Her research interests include law and economics, financial economic history, and law and development. Her current projects empirically and theoretically examine how legal innovations and political institutions affect firms and financial markets now and throughout history.

Prof. Tim Samples, Professor at the University of Georgia’s Terry College of Business. His research focuses on legal issues affecting international investment, particularly in the areas of sovereign finance and energy.

Prof. Rodrigo Olivares-Caminal, Professor at the Queen Mary University of London. His research focuses on international finance and insolvency law. He has acted as a Sovereign Debt Expert for the United Nations Conference on Trade and Development (UNCTAD), Senior Insolvency Expert for the World Bank / IFC and as a consultant to several multilateral institutions in Washington DC and Europe, Central Banks and Sovereign States as well as in several international transactions with law firms.


The fourth panel will be a discussion regarding banking regulations and terrorism financing. Vanderbilt Law School Professor Michael Newton will participate in this discussion alongside:

Prof. Richard Gordon, Professor and Director of the Financial Integrity Institute at Case Western Reserve University School of Law. Before teaching, he was senior counsel and a senior financial sector expert at the International Monetary Fund (IMF). In that role he served on the select IMF Task Force on Terrorism Finance and co-led the IMF and World Bank’s involvement in anti-money laundering and terrorism financing.