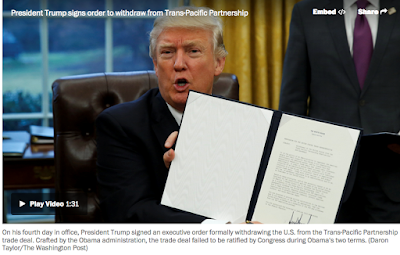 It is now no longer news that the 45th President has withdrawn the United States from the Trans Pacific Partnership. This was not a surprise and people have been commenting on this since November 2016 when the 45th President, then President Elect made his intentions known (e.g., here).

"What we want is fair trade,” Trump said during his meeting with executives. “And we're gonna treat countries fairly, but they have to treat us fairly.” (Yian Q. Mui, President Trump signs order to withdraw from Trans-Pacific Partnership, The Washington Post, Jan. 2017).  It signaled the emerging consensus among elites in the United States that it is time to abandon the framework their ancestors developed in the aftermath of the Second World War and move on to something else. That something else appears to be centered on bi-lateralism the central role of American self-interest, and the promotion  of American industry, the protection of its workers, and the augmentation of worker wages (see, e.g., here, and below). and For my own views (here).


This post includes the text of the Presidential Memorandum to the U.S. Trade Representative to that effect.

SUBJECT: Withdrawal of the United States from the
Trans-Pacific Partnership Negotiations
and Agreement

It is the policy of my Administration to represent the American people and their financial well-being in all negotations, particularly the American worker, and to create fair and economically beneficial trade deals that serve their interests. Additionally, in order to ensure these outcomes, it is the intention of my Administration to deal directly with individual countries on a one-on-one (or bilateral) basis in negotiating future trade deals. Trade with other nations is, and always will be, of paramount importance to my Administration and to me, as President of the United States.

You are directed to provide written notification to the Parties and to the Depository of the TPP, as appropriate, that the United States withdraws as a signatory of the TPP and withdraws from the TPP negotiating process.

You are authorized and directed to publish this memorandum in the Federal Register.