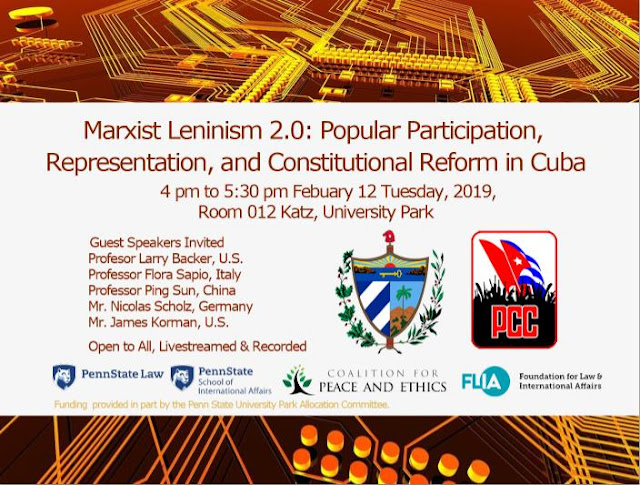 These are quite dynamic times for democracy--as theory, institution, and system.  What had once been a term whose contours and applications appeared  to converge around global certainties has encountered, in this new era of national and international relations, challenges from a number of quite distinct sources.  Though much attention has been paid to the specific challenges within the structures of Western liberal democracies, Marxist Leninist political  communities have also encountered the challenges of democracy within their own political systems.

It is with that in mind that we have organized an event hosted at Penn State University on 12 February 2019 that may be of interest to those who study democracy in action and the theories around which those actions are grounded.

The event, Popular Participation, Representation, and Constitutional Reform in Cuba,  brings together scholars from Europe, the United States, and China to consider recent developments in Cuban democratic theory and practice from a national and comparative perspective. Speakers will present the results of their study of popular participation in Cuban constitutional reform: The Democratic Constitution of Illiberal States—An Empirical Approach to Theorizing Popular Participation, Representation and Constitutional Reform in Cuba. The core object of participants will be to seek to extract the fundamental theory and characteristics that emerges from the exercise in constitutional reform that began in Cuba in 2016 and ends with a national plebiscite in February 2019. The possibilities of democratic consultation in an illiberal  democracy suggests consequences not just for Marxist Leninist states but also for liberal democratic systems.

The Concept Note Follows. This event, together with China's Socialist Democracy described earlier (see here), are the two parts of a one day international conference: Marxist-Leninism 2.0: Theory and Practice of Emerging Socialist Democracy in China and Cuba, about which more information here.

Popular participation and representation are the great antipodes of contemporary democratic theory. The former embodies the principle that political power resides in the individual; the latter that in the exercise of political authority such power must be delegated and exercised in a fiduciary capacity for the community of individuals. Yet representative delegation dilutes popular authority and requires regimes of accountability beyond elections; but popular control produces majoritarian tyranny if unconstrained.

In the construction of mediating institutions—governments and vanguard institutions mostly—political communities have drawn on a variety of theories that have sought to reconcile these core principles in the construction of government that is accepted as legitimate and thus whose authority over the polity may be asserted even without individual consent. Liberal democracies have moved from the concept of the embodiment of political self-constitution as incarnated in the body of a person (the Greek monos arkhein) to its incarnation within the body (res) of the people (publicus). But that incarnation, as well, has been situated within vanguard organizations—aristos kratia—the characteristics of which have undergone tremendous ideological transformation since the time of the Roman Republic—with its most powerful current expressions as liberal republican, Marxist Leninist vanguardist, transnational multilateralist organization.

This panel brings together scholars and commentators from Europe, China and the United States  to consider the issues of the emergence of the markers of democratic self-constitution in illiberal states.  To that end Panelists will focus on the current process of constitutional revision in Cuba, a traditional Marxist-Leninist State in the process of self-transformation. For the last several years Cuba has been in the midst of a quite public national effort at reform. To that end it has revised its core political and economic principles through a complex process under the leadership of its Communist Party (PCC).  Those reforms to the organizing political and economic theory of the state then produced a move to reform the national constitution to reflect these reforms.  In both cases, the PCC and the state apparatus attempted to invoke the core mechanics of popular participation even as it sought to manage that participation under the leadership of the PCC and popular representatives in national institutions.

What makes this process particularly interesting, with ramifications both for liberal democratic systems and multilateralist supra-national organizations with deep commitment to democratic principles, is the way in which the process of popular participation used multiple spaces. In particular, the emergence of social media platforms as novel ‘constitutive spaces’ pose a conundrum for constitutional theory.  Through the use of qualitative and quantitative measures this paper seeks to better understand both the changing character of popular participation in representative institutions, and its consequences for democratic theory.

Panelists will first present the preliminary results of their study,  The Democratic Constitution of Illiberal States—An Empirical Approach to Theorizing Popular Participation, Representation and Constitutional Reform in Cuba.  After an introduction to the study and its methodology, the panelists will discuss the findings based on analysis from government web sites, the official reports, and social media sites to examine the contours of participation, its constitution, and its limitations. Four data sets were used to seek to produce a more nuanced and complex ecology of participation.  The data sets included popular unofficial commentary on government web sites providing information about the constitutional process, commentary produced on a web site organized by elite civil society members. The third drew from comments on a facebook discussion site.  The fourth drew from official summaries of the results of formal public popular consultation organized by the PCC and state officials.  The last drew on the summaries of the intervention of Cuban legislators as they discussed the popular commentary and revised the draft proposed constitution. From these panelists will seek to draw a clearer understanding of the nature of popular participation, and consider consequences and applications both within Cuba and beyond.  Other commentators will then respond and comment on this work and suggest its implications for other states.