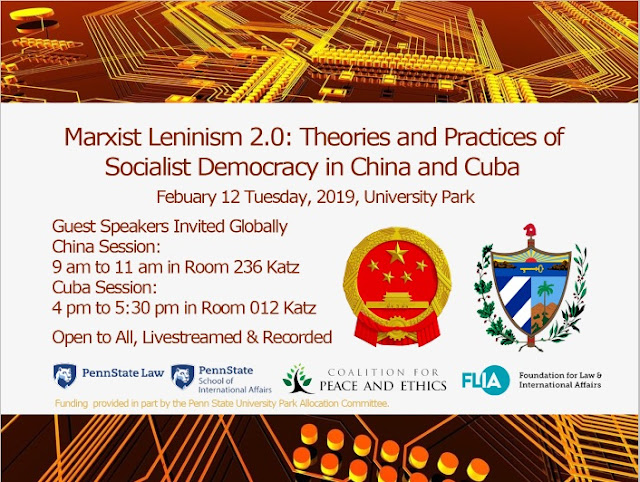 I have been circulating information about the two parts of a conference I am helping to organize at Penn State University this coming 12 February 2019. Marxist Leninism 2.0: Theories and Practices of Socialist Democracy in China and Cuba brings together participants from China, Europe, and the United States to consider the way that democratic theory is being theorized and practiced in so-called illiberal states, that is states whose political organization is not grounded in the core principles of liberal democracy. The core insight is that as liberal democracy confronts the contradictions of 20th century democratic theory and moves toward a liberal democratic theory 2.0, it may be possible to begin to understand the outlines of a similar evolutive process in Marxist Lenisit states--a move toward a Marxist-Leninism 2.0 democratic theory.

These are turbulent times for democratic theory. In the West, intellectuals worry about the continued viability of democratic republican systems in their current form. These worries have been augmented as the strategic behaviors of important actors have begun to push against the borders of democratic structures as well as by a perceived popular malaise expressed through the ordinary channels of democratic participation. The stresses affect democratic governance in a variety of ways. Populism is one label that Western influence leaders use to identify stresses on the processes of mass participation in government, principally through elections. Deep state is what others reference as the portion of the government of states that appear insulated from mass politics. Legalism is what is referenced as the diversion of political discourse within domestic legal orders and their resolution by judicial rather than political bodies. The response to these stresses remains tentative and in the earliest stages of development. The political order is being remade according to rules that are still emerging and not clear, or as yet easy to understand. At its core, these discussions touch on the continued development of stable structures that maintain robust and legitimate relations between individuals and the government that serves them, while elaborating systems of accountability and monitoring to suit the times.

And yet it is clear that what will emerge from these sometimes tumultuous conversations will produce new approaches both to the theory and practice of democratic governance in the West. These new approaches will vary to suit the new era of Western development in its many forms, but will remain faithful to the core premises of devolution of government authority from the people to representatives, popular accountability, through elections, and popular engagement through new mechanisms of mass participation in governance. This Liberal Democracy 2.0 will likely balance the competing principles of popular participation and representative government with reference to changing normative conceptions of the individual in relation to the state, now perhaps mediated more expressly by concepts of status and identity.

Has the response to these challenges resulted in the development of as Marxist Leninism 2.0 system of Socialist Democracy? That is the question that a diverse group of individuals drawn from Europe, China and the United States will consider.

The Conference is organized in two panels. The first will consider the issues of emerging Socialist Democracy and its expression in the development of the character of the leadership of the Chinese Communist Party (CPC) and of the role and operation of the state apparatus and related organizations. China has focused with increasing intensity of the core ideological and practical issues of developing socialist democracy with Chinese characteristics. Socialist democracy has become an umbrella concept that intermesh a number of important structures that constitute the framework within which democracy with both socialist and Chinese characteristics is defined and implemented. But socialist democracy also integrates what is referenced as “socialist consultative democracy.”

The First panel will consider issues related to the building of contemporary Chinese Socialist Democracy in the shadow of global debates and of the core national challenges as China moves to the next stage of its development. Panelists will examine the issue from a variety of perspectives. These include the examination of the development of democratic theory, in general, and the emergence of deep structures of Socialist Democracy in China in the New Era. To that end, we will briefly touch on the conjoining of two theoretical trajectories that, in the West, are rarely conjoined. To that end, panelists will explore the extent to which conventional exogenous democratic theory has opened the possibilities to theories of endogenous democracy. Panelists will also consider issues of accountability within developing conceptions of Socialist Democracy. To that end they will explore the emerging contours of Chinese consultative democracy. Aspects will include the role of the United Front and of the Chinese People’s Political Consultative Conference (CPPCC). Others will explore topics related to emergence of New Era constitutionalism from out of the 19th CPC Congress and expressed in the contemporary transformations of CPC and State Constitutions.

The second panel will consider the quite distinctive approach to emerging notions of democratic theory and practice in Cuba. To that end, panelists will examine the current multi-year reform of the core political and economic model of governance by the Cuban Communist Party (PCC) and the related reform of the Cuban state constitution to align with these evolving core premises. For the last several years Cuba has been in the midst of a quite public national effort at reform. The PCC and the state apparatus attempted to invoke the core mechanics of popular participation even as it sought to manage that participation under the leadership of the PCC and popular representatives in national institutions.