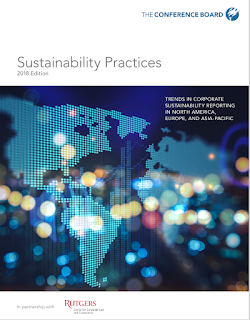 Sustainability reporting is one of the new frontiers of corporate social responsibility within an accountability based culture structured around sub-cultures of risk management and compliance (social and legal).  Its character as a frontier challenge for business responding to changing structures of legal and social risk is a function of a number of factors, many of which are both well known and under-explored. All are politically and ideologically contentious.

The Report is worth reading and considering carefully for what it tells us about sustainability "from the bottom up." The executive Summary and my brief comments follows below. 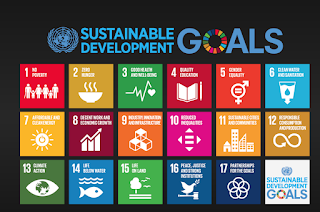 First, sustainability is itself a term in search of a consensus definition.  Sustainability, for the moment appears to be whatever it is the reporting enterprise (or the opposing non governmental organization, or for that matter the state) it is.

Second, there is a lively "marketplace" for approaches to defining sustainability.  The one with the most likely potential for dominance (eventually) may be the UN Sustainable Development Goals project.  But that is not a sure thing.

Fourth, sustainability principles are unconnected to any sort of accountability or compliance measures. Indeed, one of the great tasks that remains unfulfilled either in the context of sustainability or human rights reporting is the inability to develop accountability measures that are little more than ever more elaborate exercises in story-telling.

Fifth, efforts to develop sustainability accountability measures also are heavily embedded in a competitive market environment in which public and private bodies are racing to get "product" out into the market and to acquire a dominant position.

Sixth,  incoherence in this context is not necessarily a bad thing given the early stage of development of this area.  However This is not a bad thing in the short term but it has a profound effect on transparency, reducing its value as companies retreat to narrative reporting.

Seventh, the resulting incoherence in both principles and accountability measures, even among reporting companies, makes comparison within an enterprise and between enterprises virtually impossible except at a very broad level of generality. 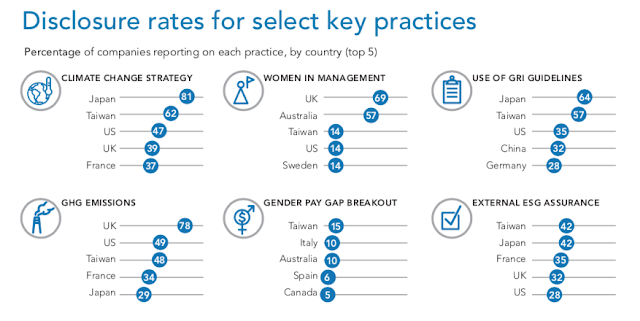 Corporate sustainability reporting—the disclosure of the economic, environmental, and social impacts of a company—has evolved tremendously over the last two decades, growing from a niche practice to one increasingly expected of companies. The main- streaming of sustainability reporting has been driven, in part, by increased pressure from shareholders and other stakeholders who see value in understanding how a company manages its nonfinancial impacts. This message was made clear by BlackRock’s CEO Larry Fink in his 2018 letter to company CEOs. Reporting is also being helped along

by pointed regulations in various regions. Whether the combination of regulatory requirements and shareholder pressure will improve actual sustainability performance, not just compliance, remains to be seen.

Sustainability reporting is still not a uniform practice across the globe and remains sporadic in countries where nonfinancial reporting regulation and stakeholder pressures are absent Even in Europe, where nonfinancial reporting has had a longer history compared to other regions, there are significant differences in levels of transparency across countries. For example, there is as wide a gap in the levels of disclosure between companies in the United Kingdom and Poland, as there is between companies in

Japan and Pakistan. The lack of comparable nonfinancial reporting regulations across jurisdictions has in part made sustainability reporting a globally uneven practice. In a few countries, mandatory nonfinancial reporting requirements have led to significant increases in disclosure rates. In the absence of mandated disclosure, in some countries industry-led initiatives and stakeholder pressure have also been major drivers of disclosure. But sustainability reporting rates are conspicuously low in countries where stakeholder pressures and regulation are both largely absent.

Mandatory and voluntary sustainability reporting instruments will continue to shape reporting practices, with an increased focus on materiality Some mandatory reporting instruments are being introduced at a regional level (e.g., the EU Directive on nonfinancial reporting), others at the national level (e.g., gender pay gap reporting in the UK), and some are market driven (e.g., Singapore Exchange Sustainability Reporting Guide, California Public Employees’ Retirement System (CalPERS) petition to require public companies to disclose environmental, social, and governance (ESG) aspects). Some companies disclose more than they are required to, spurred in large part by pressure from investors and a recognition that transparency can help strengthen relationships with stakeholders, such as employees, customers, and suppliers. Voluntary reporting frameworks, such as the GRI Standards, play an important role in helping companies navigate nonfinancial disclosure.

These voluntary reporting instruments are also evolving to encourage companies to focus their reporting on material issues—those that companies and their stakeholders deem most important or relevant to their business. Materiality is a key focus, for example, of the Task Force on Climate-related Financial Disclosures (TCFD), which encourages firms to align climate-related risk disclosures with investors’ needs. While a minority of companies currently disclose the material risks that climate change poses to their business, for example, increased pressure from investors and regulators is likely to change that.

Nonfinancial disclosure alone does not necessarily translate into better sustainability performance as companies tick the boxes without tipping the scales This finding raises the fundamental question of why companies report and whether regulations are translating into improvements in sustainability performance. For example, 99 percent of sample companies in Japan report the percentage of women on the board, yet women account for only 3 percent of directors among Japanese companies. Similarly, 70 percent of companies in Taiwan report board diversity figures, yet women account for a meager 7 percent of directors. By contrast, just under half of companies in France report the share of women on their boards, and women hold a median of 40 percent of board seats among these companies. Not all sustainability reporting requirements are effective at driving performance improvements. Existing reporting requirements are more effective when they include due diligence mechanisms to achieve not only greater disclosure but also performance improvements. Lastly, companies can benefit much more by embracing not only the letter but the spirit of the reporting instruments, mandatory or voluntary, which ultimately are intended to drive improvements in sustainability performance.