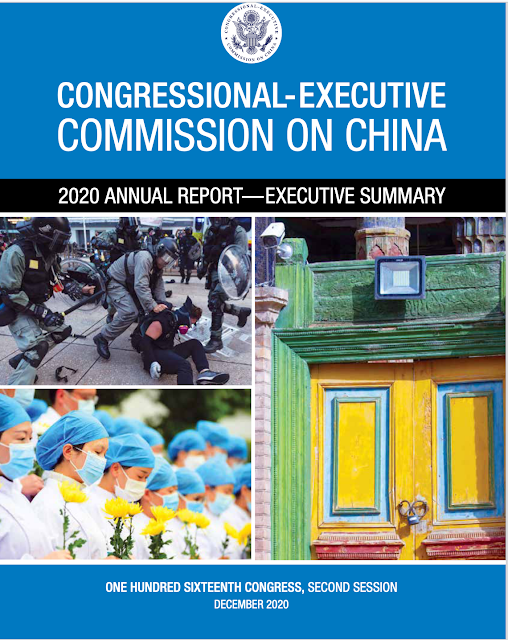 I have been following the work of the Congressional-executive Commission on China (CECC) for some time.  It represents an important source of emerging priorities for policy making, and certainly an important space where constraints on such policy making is developed, for the President in the exercise of his (and eventually her) executive authority over foreign policy.

The trajectories of the CECC, and the framework for the political constraints it will present the incoming Biden Administration appear at the very start of the Report

Over the last year, the Congressional-Executive Commission on China (Commission) found that the Chinese government and Communist Party have taken unprecedented steps to extend their repressive policies through censorship, intimidation, and the detention of people in China for exercising their fundamental human rights. Nowhere is this more evident than in the Xinjiang Uyghur Autonomous Region (XUAR) where new evidence emerged that crimes against humanity—and possibly genocide—are occur-ring, and in Hong Kong, where the “one country, two systems” framework has been effectively dismantled. (2020 Report Executive Summary, p. 3).

But it does more than that here.  It suggests that the practice of the US Congress to engage more directly and more often in shaping and constraining US policy space with China through lawmaking.  The The Uyghur Forced Labor Prevention Act (H.R. 6210 / S. 3471); the Uyghur Human Rights Policy Act (P.L. 116-145); the  Tibetan Policy and Support Act; and the Hong Kong Human Rights and Democracy Act  (P.L. 116-76), all point to the new forms of the partnership between legislature and executive branches ow at least formally controlled by a single political party.  Note as well the emerging forms of policy moving forward contained in the "General Recommendations to Congress and the Administration." These suggest a more coordinated and networked approach of response that indicates the return of the United States to global institutions (e.g., World Bank accountability drivers; working through international organizations, and the development of "creative human rights programs" (p. 28).

Of course it does not factor in the important role of the vanguard elements of social power, a source of policy affecting elements that have been recognized in a more transparent way by the Chinese core leadership (e.g., Xi asks Starbucks' Schultz to help repair US-China ties (15 Jan 2021).

The full test of the Press Release announcing the publication of the CECC 2020 Report follows with links to the Report.

(WASHINGTON, DC)—U.S. Representative James P. McGovern (D-MA) and U.S. Senator Marco Rubio (R-FL), Chair and Cochair of the bipartisan and bicameral Congressional-Executive Commission on China (CECC), issued today the Commission’s 2020 Annual Report on human rights and the rule of law in China. The full report and an executive summary are available for download on the CECC’s website.  A video statement by CECC Chairman McGovern about the 2020 Annual Report is available here.

“Year after year, the CECC’s annual report serves as a public record of the Chinese Communist Party’s (CCP) abuses of the people it governs and a call to action to address the CCP’s egregious assaults on human dignity. Our legislation in support of Hong Kong, Tibet, and Xinjiang moved U.S. policy in important ways, but, going forward, we must address the party’s suffocating surveillance state and suppression of the Chinese people. This report, once again, shows us the terrible human cost of the party’s unchecked powers abuses and why we must find ways to stand with the Chinese people,” said CECC Cochairman Rubio.

“We need a roadmap forward to take a stand against China’s outrageous restrictions on fundamental rights and to ensure that Americans are not complicit. That must include making sure that products made by forced labor from persecuted Muslim minorities aren’t sold on American shelves and that America is a safe harbor for brave Hong Kong democracy advocates fleeing repression. This report details the importance of those and other critical measures—providing the information we need to work with defenders of freedom around the world to hold the Chinese government accountable,” said Senator Jeff Merkley (D-OR).

“Regrettably, but sadly unsurprisingly, the Chinese Communist government continued its ferocious assault on human rights this past year. It enables genocide, forced organ harvesting, slave labor, and torture.  It has created a pervasive system of algorithmic surveillance that should set off warning bells in the free world. The ongoing repression experienced by Uyghur Muslims, Christians, Tibetans, Falun Gong practitioners, human rights lawyers, and the citizens of Hong Kong must be central concerns of the incoming Biden Administration. I commend the essential role played by the CECC in documenting rights abuses and in building a bipartisan consensus that human rights are integral to U.S.-China relations, and that the flouting of international standards affects all U.S. interests and cannot be ignored,” said Representative Chris Smith (R-NJ).

“Holding China accountable for its substantial human rights abuses, violations of religious freedom, and suppression of political freedoms both within its borders and around the world is of paramount importance. I am honored to have worked with my colleagues on the CECC to publish this important report and will continue to work to advance human rights in the PRC and around the world,” said Senator Steve Daines (R-MT).

“China continues to commit egregious human rights abuses--against religious minorities; against the free exercise of speech, press, and assembly; against Hong Kong, the Xinjiang Uyghur Autonomous Region, and Tibet; and against countless others. I’m proud the Commission has raised awareness of these horrific actions and has advanced concrete steps we can take to counter China's abusive behaviors,” said Representative Ben McAdams (D-UT).

“Make no mistake, the Chinese Communist Party is committing crimes against humanity and this report sheds light on the regime’s systemic human rights violations against its own people. The inhumane abuses committed by the CCP include mass internment of Uyghurs, coercive population control methods, and religious persecution of all faiths. I encourage everyone to read this report and understand the state-directed brutality Chinese citizens are forced to endure. We must hold China accountable,” said Representative Vicky Hartzler (R-MO).

The CECC found that over the last year, the Chinese government and Communist Party have taken unprecedented steps to extend repression through censorship, intimidation, and the arbitrary detention and torture of individuals exercising their fundamental human rights, most brutally in the Xinjiang Uyghur Autonomous Region, Tibet, and Hong Kong. The report covers violations of the Chinese government’s international human rights obligations, and also covers among its nineteen chapters, abuses of the freedoms of religion and expression, forced labor, mass surveillance, forced televised confessions, restrictions on civil society, the targeting of human rights defenders and their families, and abuses of the legal system that affect all of China’s citizens.

The report also includes special emphasis this year on violations of human rights under COVID 19 and the Chinese government’s efforts to intimidate, censor, and silence U.S. citizens and others critical of the PRC’s human rights record, including at the United Nations and in other multinational fora.

The report continues to highlight political and religious prisoner cases. A list of 16 representative cases highlighted in this year’s report can be found here. The CECC’s Political Prisoner Database includes more detailed information on these cases and thousands of individuals currently known or believed to be detained in China.

Chair McGovern and Cochair Rubio commend the capable and professional work of the CECC’s research staff in producing the Commission’s 19th Annual Report. The full 2020 Annual Report can be accessed on the CECC’s website.