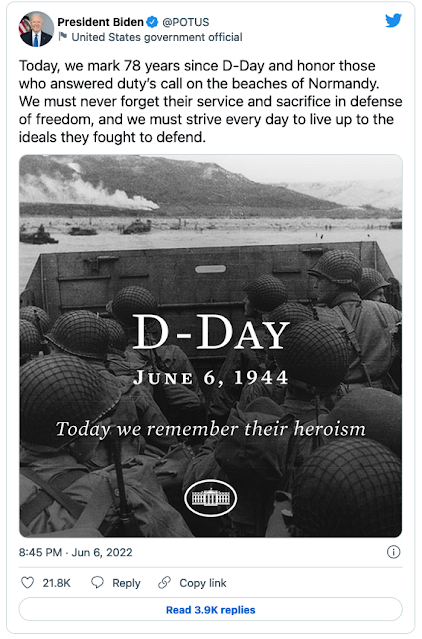 This year marks the 78th anniversary of the time in which the predecessors of the current cores of leadership of liberal democratic Anglo-America-Europe, at great cost, began the last successful campaign to liberate Europe from the control of the invading forces of the Nazi Reich and its allies and collaborators.  One might have imagined that in the shadow of another European war precipitated by the invasion of a small country by a large state with imperial ambitions (Of an old fashioned sort) the commemoration might have been a good time to highlight the symbolic value of the landing and the principles for which so many gave their lives--then. . . .and now.

For Mr. Biden, however, the commemoration of that event merited a tweet. A very nice tweet to be sure.  And one produced by adept staff--adept at least in the making of cool looking messaging on contemporary modes of social media. And it was a tweet made at the close of the day in Washington, long after most Europeans had gone to bed.

Putting that aside; what then was commemorated? What was chosen to be highlighted? How was the message of this event carried forward to the current day?

1. The Past: The words used speak for themselves:

"Today, we mark 78 years since D-Day and honor those who answered duty's call on the beaches of Normandy," Biden tweeted. "We must never forget the service and sacrifice in defense of freedom, and we must strive every day to live up to the ideals they fought to defend."

This speaks to the past, to memory, and to the distillation of the event into a sacrifice that gave form to ideal to which striving continues to be necessary.  One might as well speak of Agincourt.

2. The Present: In a way that parallels the limits of the ways in which American officials now "strive every day to live up to the ideals they fought to defend"; the President sent Army Gen. Mark A. Milley, chairman of the U.S. Joint Chiefs of Staff, to Normandy, for the purpose of connecting past to present--but now as an involved spectator rather than as the leading force.

“The fight in Ukraine is about honoring these veterans of World War II,” Army Gen. Mark Milley, chairman of the U.S. Joint Chiefs of Staff, said at the American Cemetery of Colleville-sur-Mer, overlooking Omaha Beach in Normandy.  He added: “It’s about maintaining the so-called global rules-based international order that was established by the dead who are buried here at this cemetery.” (AP Exclusive: Ukraine recovers bodies from steel-plant siege).

So, it seems, that the Ukrainians are now honoring the ideals. "Striving" has again become a term rich in differentiated meaning, the nature of the responsibilities, duties, and obligations  of which vary.

3. Ukraine as a footnote of a glorious historical past (‘Darkness returned’). The disconnect between the pieties that can be uttered about events now relegated to the safety of a Search of Lost Time (À la recherche du temps perdu), a history in which most who lived it are dead (see Ruminations 78: Reflections on the 74th Anniversary of D-Day; Memory, Remembrance and Recollection) is nicely framed by the reflections posted on the websites of some US Embassies (D-Day anniversary prompts reflection).

Invoking “the Great Patriotic War” (another term for World War II in Russia), Putin seeks to justify his aggression against Ukraine by “repeating his false claim that Ukraine is run by Nazis controlled by the West,” according to a May 9 NBC News report.

But Ukrainian President Volodymyr Zelensky, the grandson of a Holocaust survivor, draws a straight line from the Nazis’ quest for dominion over Europe to Putin’s aggression against Ukraine.

“Decades after World War II, darkness returned to Ukraine,” Zelensky said in a May 8 address. “Evil has returned. Again! In a different uniform, under different slogans, but for the same purpose.”

This anniversary of the landing at Normandy, then, suggests some of the great tensions that have now emerged in the constitution and operation of the liberal democracy, the scope of its responsibilities, and the extent to which it is willing to protect itself and its values. In a sense, Mr. Biden was right to downplay the centrality of its its meaning--and the reminder of the responsibilities it represented for the vanguard forces of the liberal democratic world.  Periods of transition are painful; and one of its primary elements is the distancing of foundations (as disconnected historical events) with a diminishing connection to the present. Normandy reminds the liberal democracies that risk and sacrifice are elements of that responsibility for their self-preservation and those seeking to embrace its values, customs, and practices.  The inability to effectively embed the rhetoric of Ukraine with the bolder discursive meanings of the Normandy landing suggests the great discursive cracks in the way way the liberal democratic west now confronts old fashioned threats on its flanks. To have said more would have forced Mr. Biden either to explain the way in which the Americans are making good on the sacrifice of Normandy in the contemporary world (always a challenge even in good times but especially now) or to acknowledge that the nature of what constitutes striving has now changed complexion. This is not to suggest that direct warfare is inevitable for the US and NATO in Ukraine--certainly that sort of thinking might have produced a very different responses to earlier Russian invasions in Europe (Hungary 1956 and Czechoslovakia in 1968).  But in those cases, the liberal democratic West had conceded imperium to the Soviets over those territories (decisions that will occupy future students of that era).  That is not the case now--in Georgia, in Moldova, or in Ukraine. And in any case, one can't fight 21srt century wars with the limited palette of 20th century techniques. The best way of engaging 19th century adventurism in the current era may be asymmetrical and de-centered; certainly the Americans, their allies, and the non-state community provide hints of that possibility. And what the masses don't know about asymmetrical tactics may be more important than what is on display.  Silence--and the ability to silence--has become a potent weapon in its own right. One can, therefore, on this day and grateful for the tweeting of the US President, look forward to the greater expression of the "striving" to which Normandy calls the nation (and certainly its officials) in the current historical era that one hopes points to development and not decrepitude.  At the same time one might lament the missed opportunity to use the occasion to build a new discursive allegiance to the old values in contemporary forms, that is to bring forward the expressions of gratitude for a now disintegrating past.