The fight against corruption is the biggest political struggle that affects people's hearts and minds. It is necessary to deepen the understanding of the construction of party conduct and clean government and the fight against corruption under the new situation, improve the ability and level of integrated promotion of not daring to be corrupt , not being corruptible, and not wanting to be corrupt [the “三不腐” (Three No Corrupts)], and comprehensively winning the tough and protracted battle against corruption. [反腐败斗争关系民心这个最大的政治，是一场输不起也决不能输的重大政治斗争。要加深对新形势下党风廉政建设和反腐败斗争的认识，提高一体推进不敢腐、不能腐、不想腐能力和水平，全面打赢反腐败斗争攻坚战、持久战] ("Xi Jinping emphasized during the 40th collective study of the Political Bureau of the CPC Central Committee Improve the ability and level of integrated promotion of "three non-corruption", and comprehensively win the protracted battle against corruption" ["习近平在中共中央政治局第四十次集体学习时强调: 提高一体推进“三不腐”能力和水平 全面打赢反腐败斗争攻坚战持久战"]) People's Daily 20 June 2022).

That struggle against corruption now centers on a more comprehensive approach to corruption that focuses on the individual and individual agency (不敢腐),  institutional structures (不能腐), and the ideological framework within which individuals make decisions and institutions function (不想腐进行).  In the process, corruption itself acquires a new more comprehensive meaning, one ties to overarching integrity and trustworthiness campaigns (and with it the development of social credit and monitoring-nudging systems), as well as with the core socialist values and its political expression as New Era ideology-operationalization. The initial focus is on the rectification of cadres at all levels, and then the state apparatus along with public and private mass organizations. More broadly, they are meant to provide a foundation, which if successful can also be used as a model to export along the spokes of the Belt & Road, and from there as a basis for Chinese interventions in international forums.

Even as Mr. Xi was underscoring the central importance of anti-corruption efforts to the high priory policy to enhance the integrity and trustworthiness of government, the  Central Commission for Discipline Inspection and State Supervision Commission (中央纪委国家监委网站 发布时间) released to its Website (Release time: 2022-06-18 18:02) a graphic to improve the ability and level of promoting the "three non-corruptions" in an integrated manner, and comprehensively win the protracted battle against corruption (图解 | 提高一体推进“三不腐”能力和水平 全面打赢反腐败斗争攻坚战持久战).

This was at the direction of Mr. Xi.

习近平指出，纪检监察机关要主动应对反腐败斗争新形势新挑战，深化对管党治党规律、反腐败斗争规律的认识，不断提高工作能力和水平，主动接受党内和社会各方面的监督，以自我革命精神坚决防止“灯下黑”。纪检监察干部要做到忠诚坚定、无私无畏，始终以党性立身，秉公执纪、谨慎用权，敢于善于斗争，真正做到让党中央放心、让人民群众满意。[Xi Jinping pointed out that the discipline inspection and supervision organs should take the initiative to respond to the new situation and new challenges in the fight against corruption, deepen their understanding of the laws of governing the Party and the laws of the fight against corruption, continuously improve their work ability and level, and take the initiative to accept supervision from all aspects of the Party and society. Resolutely prevent "darkness under the lights" with the spirit of self-revolution. Discipline inspection and supervision cadres must be loyal, firm, selfless and fearless, always stand in the spirit of the party, exercise discipline impartially, exercise power prudently, and dare to be good at fighting, so as to truly reassure the Party Central Committee and satisfy the people.] ("Xi Jinping emphasized during the 40th collective study of the Political Bureau of the CPC Central Committee Improve the ability and level of integrated promotion of "three non-corruption", and comprehensively win the protracted battle against corruption" ["习近平在中共中央政治局第四十次集体学习时强调: 提高一体推进“三不腐”能力和水平 全面打赢反腐败斗争攻坚战持久战"]) People's Daily 20 June 2022).

And it was directed at Party officials, especially senior cadres.  The projection of the effort in that direction is important--especially in the run up to the October meetings, and in preparation for the next Communist Party Congress.

习近平强调，要从源头着手，完善管权治吏的体制机制，更加常态化、长效化地防范和治理腐败问题。要着力减少腐败机会，抓住政策制定、决策程序、审批监管、执法司法等关键权力，严格职责权限，规范工作程序，强化权力制约，减少权力对微观经济活动的不当干预。[Xi Jinping emphasized that it is necessary to start from the source, improve the system and mechanism for the management of power and officials, and prevent and control corruption in a more normalized and long-term manner. Efforts should be made to reduce opportunities for corruption, seize key powers such as policy formulation, decision-making procedures, approval and supervision, and law enforcement and judiciary.] (Ibid.)

It is even more important in terms of the more long term project to promote Socialist whole process democracy and the Socialist path toward governance (and with it stability and prosperity) (see Discussion Draft Posted for Comment: "Linking People to Governing Institutions Through Leninist Political Parties: 全过程民主 (Whole Process Democracy), Socialist Consultative Democracy, and 《中国新型政党制度》 (China's New Political Party System)". The stakes are high, time is short, and the likelihood of quite targeted rectification now much higher. And behind this, perhaps, some frustration at the effectiveness of implementation of the national zero COVID  policy.

The key element in this campaign is the “三不腐” [Three No Corrupts];

反腐败斗争取得压倒性胜利并全面巩固，但形势依然严峻复杂。我们对腐败的顽固性和危害性绝不能低估，必须将反腐败斗争进行到底。一体推进不敢腐、不能腐、不想腐，必须三者同时发力、同向发力、综合发力，把不敢腐的强大震慑效能、不能腐的刚性制度约束、不想腐的思想教育优势融于一体，用“全周期管理”方式，推动各项措施在政策取向上相互配合、在实施过程中相互促进、在工作成效上相得益彰 [The fight against corruption has won an overwhelming victory and has been consolidated in an all-round way, but the situation remains grim and complex. We must not underestimate the stubbornness and harmfulness of corruption, and we must carry out the fight against corruption to the end. To promote the one that does not dare to be corrupt, cannot be corrupt, and do not want to be corrupt, the three must exert their efforts at the same time, in the same direction, and comprehensively, so as to combine the powerful deterrent effect of not being corrupt, the rigid system constraints that cannot be corrupt, and the ideological and educational advantages of not wanting to be corrupt. Integrate into one, and use the "full-cycle management" approach to promote various measures to cooperate with each other in terms of policy orientation, promote each other in the implementation process, and complement each other in terms of work results.] ("Xi Jinping emphasized during the 40th collective study of the Political Bureau of the CPC Central Committee Improve the ability and level of integrated promotion of "three non-corruption", and comprehensively win the protracted battle against corruption" supra)

To understand the new forms of Chinese anti-corruption efforts, then, it will be useful to understand the way that efforts will be undertaken to integrate individual, institutional, and ideological/educational measures. What this means remains to be seen, though it will be likely to draw on and coordinate the large number of measures already in place. The shape of the anticipated rectification will be comprehensive--and it is likely to be both data driven, and guided by a quantitative set of accountability measures. Senior cadres, bit much more middle level officials at the senior and senior provincial and provincial level officials are likely to feel the effects in a new set of measures designed to manage their behaviors and decision making, and to refine the ideological pathways by which both are undertaken in ways that can be assessed. More importantly, the suggestion of institutional measures points to reform in the operation of the political and administrative apparatus--these will likely align with the evolving principles of whole process democracy.

The Central Commission for Discipline Inspection and State Supervision Commission graphic follows in the original Chinese. 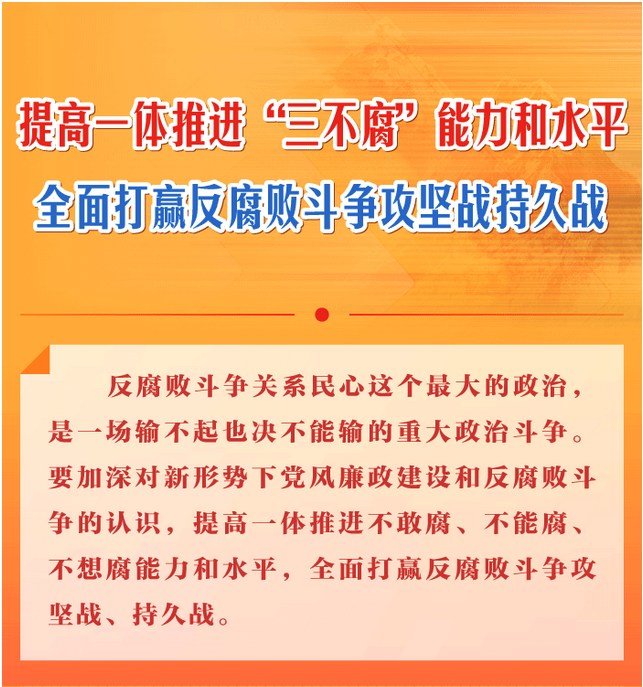 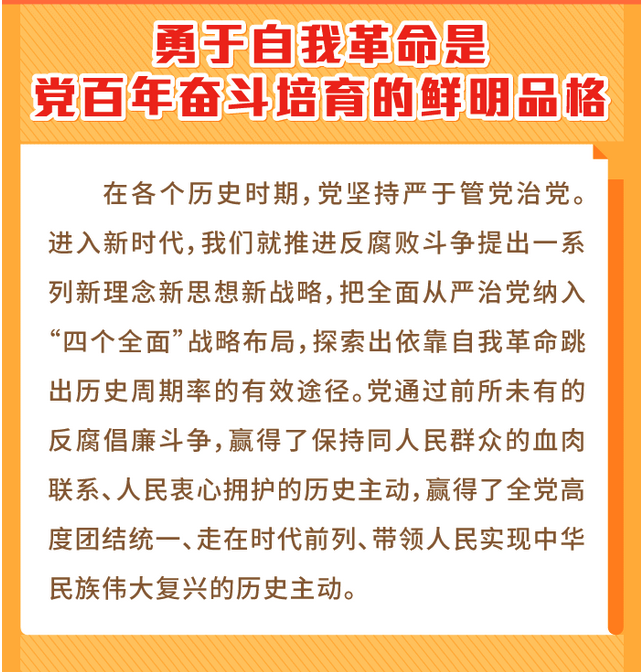 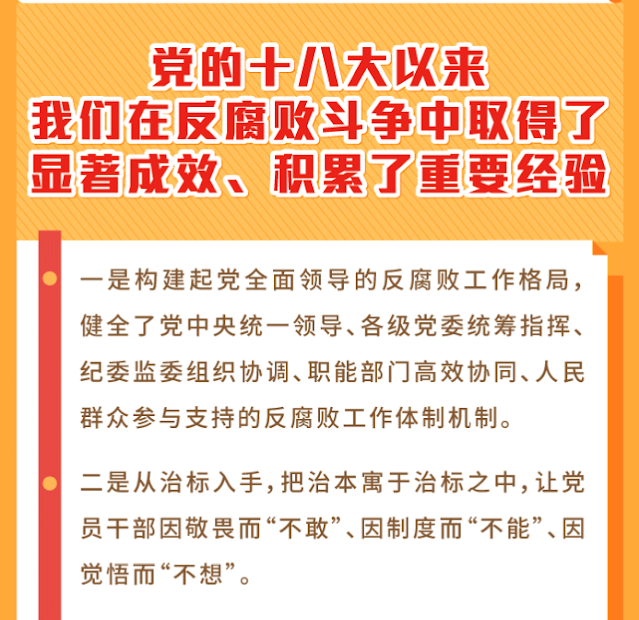 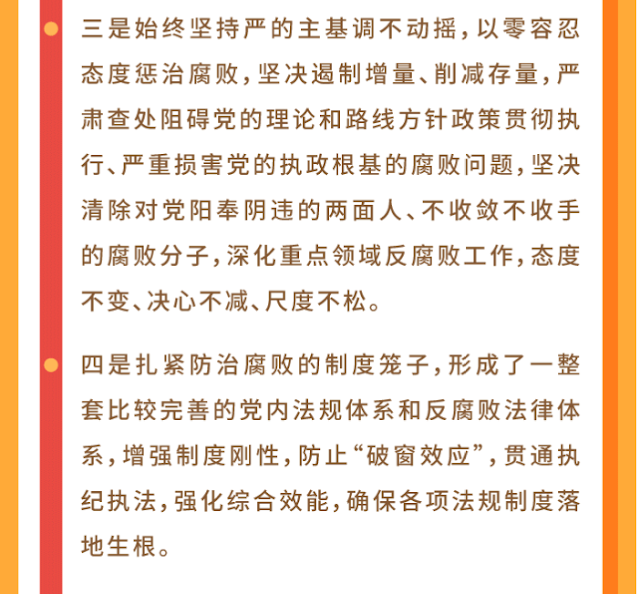 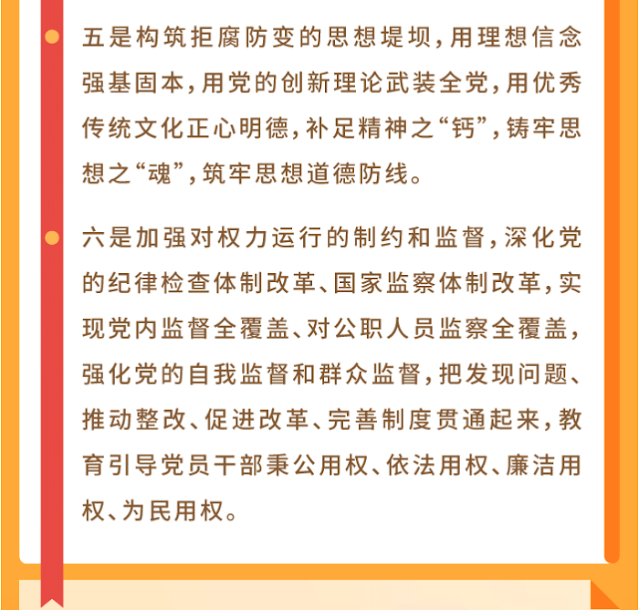 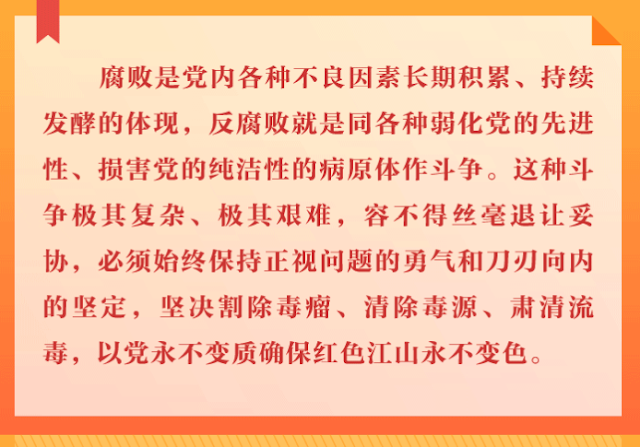 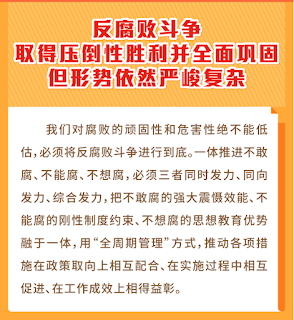 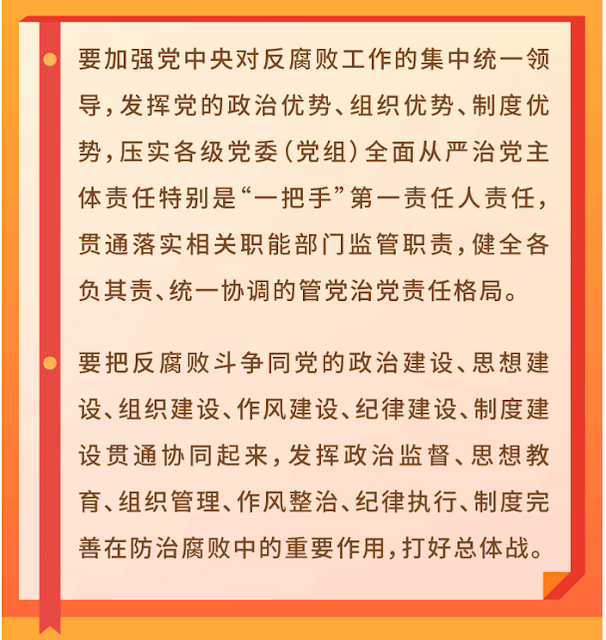 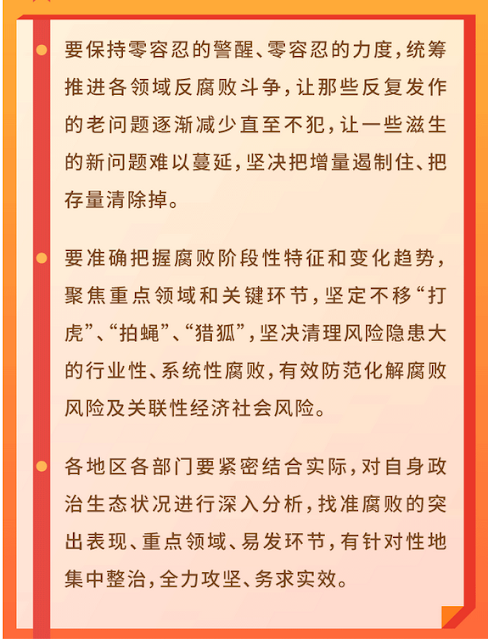 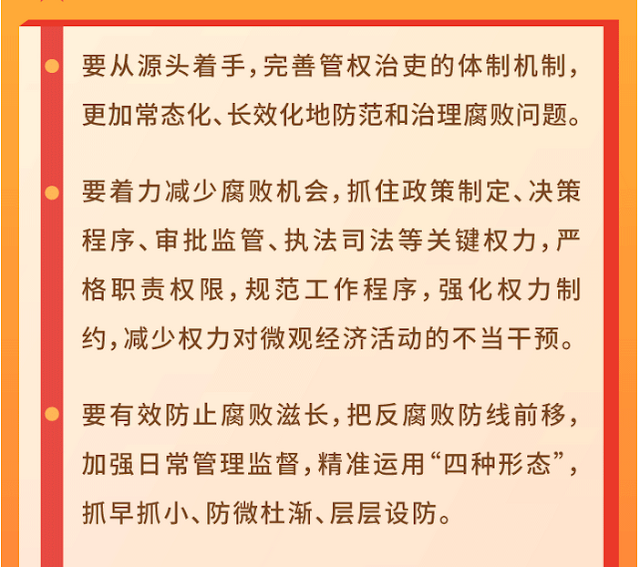 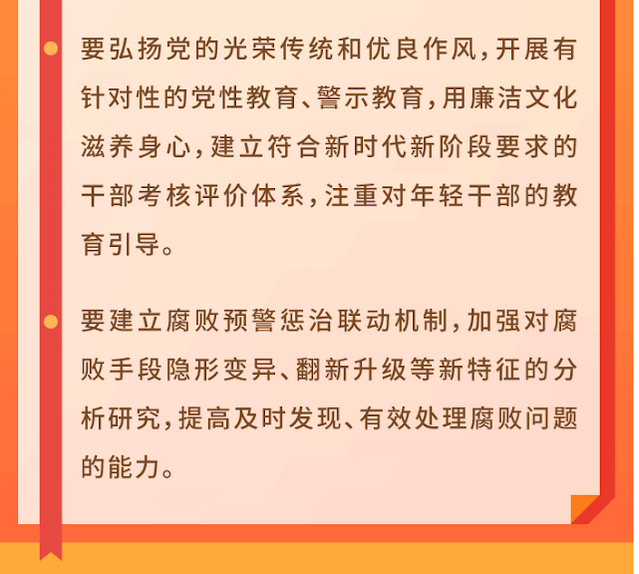 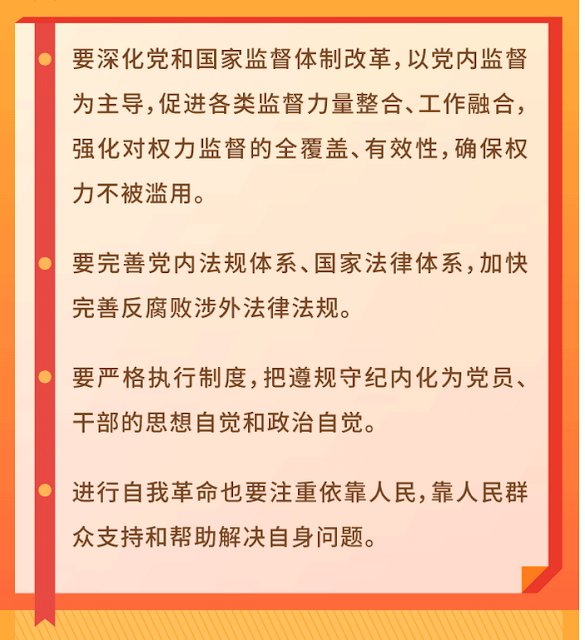 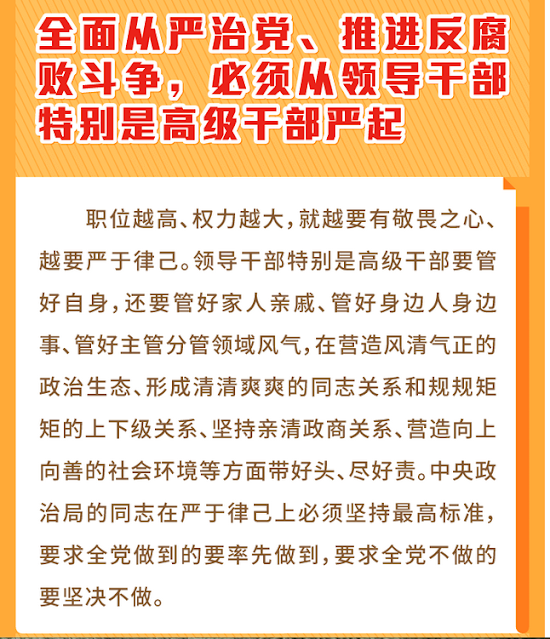 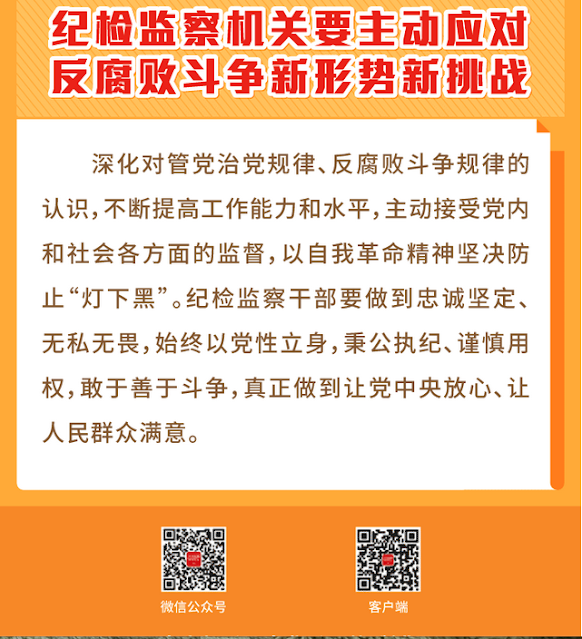