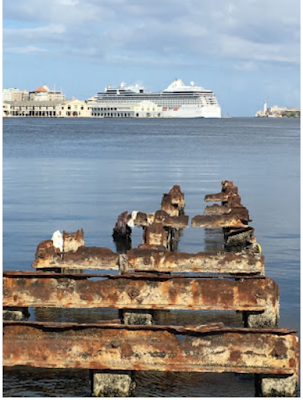 
One of the great feats of globalization was its transposition of the notion of "mutually assured destruction" from the military to the economic sector. The mechanics and effects of this transposition are nicely evidenced in the continuing Affair of the Sonic Weapons (here and here). Mutually assured destruction appears now to have moved to a new stage as the ramifications of the U.S. response to the Affair of the Sonic Weapons Attack now emerges and as it begins to dawn on the Cuban state the extent of the potential effects of the issuance of a travel warning by the U.S. government to its citizens (here).

What was expected was the usual diplomatic retaliation--announced recently the intent to expel a number of Cuban diplomats in the U.S. (here). But the more long lasting effects of the Affair of the Sonic Weapons touches on its threat to a core element of fundamental Cuban economic planning.  That planning, including Ciba's2030 vision was elaborated just last year in the  Conceptualización del modelo económico y social Cubano de desarrollo socialista: Plan nacional de desarrollo económico y social hasta 2030: Propuesta de vision de la nación, ejes y sectores estratégicos in which the 7th Cuban Communist Party Congress posited that development can be better managed by rejecting the central role of markets, and substituting state planning in its place, taking an all around view of economic planning as inextricably bound up in social, political and cultural progress of a nation (discussed HERE, and  HERE).

Two critical sectors may be affected by the travel warning and the related increasing transaction costs of doing business in Cuba by U.S. interests.  The first and most vulnerable is the Cuban tourist sector.  It is true enough that the U.S. makes up a fraction of tourism.  Yet the marginal contribution to income cannot be underestimated.  More importantly it is the anticipated substantial growth in U.S. tourism (and its drag effects on tourism from other places) that the Cubans might have been counting on to build a tourist based business sector. The second is the pharma sector.  Here the difficulty will come with the anticipated new investment regulations that may substantially increase the compliance costs for joint ventures and investment in Cuba. Again, while Cuba has set its sights on Latin America and Europe as more viable base line sources of sector development, the lucrative U.S. market would have contributed in significant ways to the overall positive effect.  If both tourism and pharma are threatened, then the likelihood that Cuba will slip into recession, or remain somewhat stagnant, will grow.  This could not come at a more difficult time, as the island continues to face the problems and costs of hurricane reconstruction. 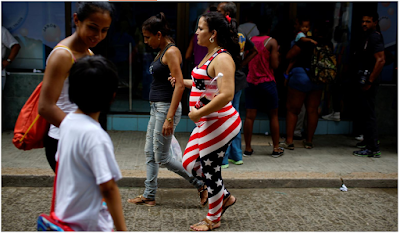 
By Nelson Acosta and Marc Frank

HAVANA, Oct 1 (Reuters) - Businesses catering to U.S. tourists visiting Cuba have had a rude awakening in the last few months after enjoying a 2-1/2-year boom.

First, U.S. President Donald Trump in June ordered tighter restrictions on travel to the Caribbean island. Then the U.S. State Department warned on Friday against going there after a spate of alleged attacks on its diplomats in Havana, stating until the cause was determined, it could not guarantee Americans' safety. (Full Story)

The new regulations have not yet been published, and the warning does not mean Americans cannot travel to Cuba. Still, the moves relegate the island back to the realm of "forbidden fruit" to be enjoyed at one's peril.

"Just as the re-establishment of Cuba-U.S. relations was a positive influence, now this will be very negative," said Jose Enrique Montoto, who rents an apartment, often to American guests, through the online marketplace Airbnb. "They are creating a mood of insecurity for those who want to travel to Cuba."

Montoto, 57, said three U.S. citizens who were set to arrive in Havana on Saturday had canceled their reservation with him at the last minute without an explanation. He worried that more would do the same.

To be sure, less than 10 percent of foreign visitors to the island are Americans, even though the number of those travelers tripled to 285,000 last year due to new exemptions to the travel ban in the wake of the 2014 U.S.-Cuban historic detente under former U.S. President Barack Obama.

According to Cuban government statistics, that would place local revenues from Americans' sojourns at about $300 million.

Cuba has long catered largely to Canadian and European tourists, and some local business owners said recent events under Trump were a harsh reminder not to rely too much on one market.

A dip in tourism this year would be a further blow to Cuba's economy, which already is struggling with a drop in cheap oil shipments from key ally Venezuela, lower exports and a cash crunch.

WHAT ABOUT THE BOTTOM LINE?

Airbnb, American Airlines AAL.O, United Airlines UAL.N and other U.S. companies said on Friday that they would continue their operations on and to Cuba despite the travel warning and the new, tighter regulations.

However, business could suffer if fewer Americans visit there.

Trump has said he wants to eliminate one of the most popular exemptions to the U.S. travel ban on Cuba, the self-directed "people-to-people" category. Confusion remains about what will be allowed.

U.S. cruise operators such as Royal Caribbean RCL.N and Carnival Corp CCL.N may remain unscathed, experts said, since their guests can stay on board, while the alleged attacks on U.S. diplomats are said to have occurred at their homes and hotels.

U.S. tour operators said the alleged attacks had not affected any U.S. tourists and that Cuba remained one of the safest destinations possible.

"Our conclusion was this seems to be a political statement, not a warning because they are worried about peoples’ health," said RESPECT Co-Coordinator Bob Guild.

Cubans in the hospitality sector said that rather than wait for relations to improve under Trump, they should instead look to new markets.

"He is trying to close the door to us ever more," said Aimee Santos, 53, who rents out her flat, "but whenever a door closes, others open."