Just Published: "From Guiding Principles to Interpretive Organizations: Developing a Framework for Applying the UNGPs to Disputes that Institutionalizes the Advocacy Role of Civil Society" 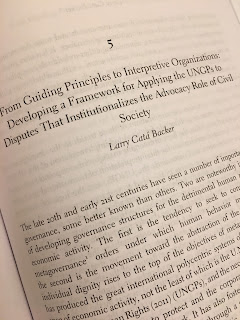 I wanted to take this opportunity to note the publication of my short essay, "From Guiding Principles to Interpretive Organizations: Developing a Framework for Applying the UNGPs to Disputes that Institutionalizes the Advocacy Role of Civil Society."  It appears in  Business and Human Rights: Beyond the End of the Beginning (César Rodríguez-Garavito, ed., Cambridge University Press, 2017), a collection of marvelous essays on the scope and direction of the project of the institutionalization of business and human rights, and the context in which that is possible (see announcement HERE).

The abstract and introduction follow.  The essay may be accessed HERE.


"From Guiding Principles to Interpretive Organizations: Developing a Framework for Applying the UNGPs to Disputes that Institutionalizes the Advocacy Role of Civil Society."
Business and Human Rights: Beyond the End of the Beginning (César Rodríguez-Garavito, ed., Cambridge University Press, 2017) pp. 97-110.

Abstract: Global human rights NGOs evidence the power and temptations of the great normative institutional forces that affect the governance projects of transnational society in the early 21st century. These forces — (1) the drive for order and rationality even within emerging polycentric orders beyond the state, and (2) the transformation of the individual within this polycentric universe from singular being to disembodied abstraction made flesh in the body of civil society — are irresistible. The chapter’s thesis is this: the logic of emerging meta-governance points to the need to establish a central mechanism for the interpretation of transnational normative governance instruments and particularly the United Nations Guiding Principles for Business and Human Rights (UNGPs), and the logic of emerging mass governance principles points to the need to vest representative civil society organizations with the authority to bring cases and advocate before such an interpretive body. Movements to develop comprehensive treaty structures pose a threat to the establishment of a workable transnational order compatible with the realities of contemporary governance. This chapter considers both the challenges of the arguments for the institutionalization of NGOs within the normative framework of the UNGPs and the strengths of their critique of the Working Group on human rights and transnational corporations and other business enterprises (WG) for missed opportunities. Two of these opportunities, to date ignored, are worthy of serious development. The first is a facility for delivering interpretations of the GPs whether or not deemed binding by state or enterprise instrumentalities at the international level. The second, drawing from the first, would incorporate civil society as a key representative of individuals seeking an interpretation of the INGPs in particular contexts. It follows that the application-interpretation facility requires not just the establishment not just of an institutional framework for providing a means of hearing specific complaints, but one in which individuals could bring these complaints through representative civil society for determination of the application of the GPs in context. The object is to more fully develop the UNGP’s remedial third pillar through the creation of an internationally based autonomous source of process and governance that raises the stakeholder status of individuals, now represented by a civil society sector under the third pillar that states enjoy under the first pillar and enterprises enjoy under the second. The way to that goal requires substantial development, but its value appears clear.

The late 20th and early 21st centuries have seen a number of important trends in governance, some better known than others. Two are noteworthy in the context of developing governance structures for the detrimental human rights effects of economic activity. The first is the tendency to seek to construct integrated metagovernance[1] orders under which human behavior may be managed; the second is the movement toward the abstraction of the individual even as individual dignity rises to the top of the objectives of metagovernance. The first has produced the great international polycentric systems of human rights governance of economic activity, not the least of which is the U.N. Guiding Principles for Business and Human Rights (2011) (UNGPs), and the necessity of a unifying order to harmonize the state duty to protect and the corporate responsibility to respect human rights under that framework. It has also fostered international movements to bring governance back into the state through a system of international treaties aimed at managing the substance of domestic legal orders.[2] The second has accelerated the development of mass movements and mass democracy that now serves as the ideological core of legitimate governance. It has also given rise to the emergence of mass collectives, representing either individuals or capital – the great multinational corporations and civil society actors – within which mass politics and mass economic activity can be undertaken. Each represents and embodies the individual who is no longer relevant as an autonomous actor within metagovernance systems. The second would transform global NGOs into the incarnation of individuals whose human rights are adversely affected by state and multinational enterprises.

This chapter considers the ramifications of these trends in the development of a necessary governance architecture for the sound implementation of the UNGPs. The chapter’s thesis is this: the logic of emerging metagovernance points to the need to establish a central mechanism for the interpretation of transnational normative governance instruments and particularly the UNGPs, and the logic of emerging mass governance principles points to the need to vest representative civil society organization with the authority to bring cases and advocate before such an interpretive body. Movements to develop comprehensive treaty structures pose a threat to the establishment of a workable transnational order compatible with the realities of contemporary governance. Section 1 briefly contextualizes the issue within the formative trends of metagovernance and mass movements that characterize our age. Section 2 then considers contemporary critiques of the development of the GPs through the UN Working Group on human rights and transnational corporations and other business enterprises (WG), established in 2011 by the U.N. Human Rights Council. On that basis, it suggests the manner in which these trends ought to be applied to develop effective mechanism for the implementation of the UNGPs at the international level, taking advantage of the polycentricity at the heart of governance systems in this century. Section 3 ends with an analysis of the alternative governance framework now advanced by states and suggests the way its reactionary character detracts from the important project of operationalizing metagovernance of the human rights effects of economic activity.

[1] Metagovernance can be understood as the governance of governance, the construction of a harmonized set of values, norms and principles underlying governance systems and drawing them together. Cf. Jan Kooiman and Seven Jentoft, “Meta Governance: Values, Norms and Principles, and the Making of Hard Choices,” Public Administration 87(4) (2009), 818–836. The cyclicity of such efforts grounded in the urge to manage increasingly complex social life is explored in Bob Jessop, “Governance and Meta-Governance in the Face of Complexity: On the Roles of Requisite Variety, Reflexive Observation and Romantic Irony in Participatory Governance,” in Participatory Governance in Multi-Level Context (eds.), Hubert Heinelt, Panagiotis Getimis, Grigoris Kafkalas, Randall Smith, and Erik Swyngedouw (New York: Springer, 2002).